Rob Delaney on a ‘sad, angry, confused’ Christmas without his son Henry

The actor spoke out to destigmatise grief and to help other parents feel ‘seen, heard, loved’ 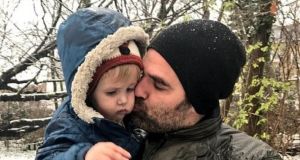 The actor Rob Delaney has been speaking about his family’s grief at their first Christmas without his two-year-old son, Henry, who died last January.

“The day itself was okay, maybe because there were so many horrible, painful days leading up to it; we must have hit our quota or something. We talked about him a lot & included his memory throughout the day,” the Catastrophe star said.

Delaney also posted a photograph of Henry, who was diagnosed with a brain tumour in 2016, just after his first birthday. He had surgery to remove the tumour, and underwent treatment during 2017. But the cancer returned in the autumn of that year, and Henry died in January 2018.

“Henry was a joy. He was smart, funny, and mischievous and we had so many wonderful adventures together,” Delaney wrote in a Facebook post last February, weeks after his son’s death.

Henry’s “drive to live and to love and to connect was profound”, he said. “I am astonished by the love-in-action displayed by Henry’s mom and his brothers. They are why I will endeavour to not go mad with grief. I don’t want to miss out on their beautiful lives. I’m greedy for more experiences with them.”

Our first Christmas without Henry came & went. The day itself was okay, maybe because there were so many horrible, painful days leading up to it; we must have hit our quota or something. We talked about him a lot & included his memory throughout the day.

Heartfelt thanks to everyone who's shared how you felt/feel when your parent died. It's a help. I'm in a strange new country and I've no map. But you are my map.

In September the American actor shared extracts from a book that he began to write during his son’s illness but has been unable to finish “because our family’s story has a different ending than I’d hoped for”.

“The reason I’m putting this out there now is that the intended audience for this book was to be my fellow parents of very sick children. They were always so tired and sad, like ghosts, walking the halls of the hospitals, and I wanted them to know someone understood and cared,” he said then.

Writing on Twitter yesterday, Delaney said that he was speaking publicly about Henry again now not because it was “therapeutic” or an “update” but because he wanted “other bereaved parents & siblings to feel seen/heard/respected/loved. And maybe they might help someone not schooled in grief support a friend better.”

Christmas can be a particularly difficult and painful time for everyone who has been bereaved.

In an article for The Irish Times on Christmas Eve, Ruth Fitzmaurice wrote about preparing for Christmas with her five children but without her late husband, the film-maker Simon Fitzmaurice, who died from motor-neurone disease in 2017. “Suffer little children, but not this much,” she said. “It’s not fair. Grief rates should be capped for kids by some kind of Government body. The five of them were robbed of a dad and that’s enough.”

The writer Marian Keyes has also been speaking about grieving at Christmas; her father, Ted, died on December 15th this year. “Heartfelt thanks to everyone who’s shared how you felt/feel when your parent died. It’s a help. I’m in a strange new country and I’ve no map. But you are my map,” she wrote after her followers on Twitter shared their own experiences of grieving for a parent.

Rob Delaney said his speaking publicly about Christmas without his son was part of “an effort to destigmatise grief”.

The Jack & Jill Children’s Foundation has offered advice on how to support parents with a very sick child, or those who are coping with the loss of a child.

Experts advise that you “remember it’s not about you and your discomfort at not knowing what to say or do”. If you don’t know what to say, it’s better to be frank and simply say so. Don’t diminish their experience by saying you know how they feel; don’t avoid staying in touch, don’t stop including them. Do say the child’s name.

Support services for the bereaved include the organisation FirstLight, which offers 24/7 emergency support to bereaved parents and families on 1850-391391. The Irish Hospice Foundation offers advice to the bereaved and their friends and families. A new Irish podcast, Grief Encounters, explores all aspects of “life, love and loss”