Belfast: 'The friendly city that helped to mend my badly broken heart'

Are We There Yet: A place of new beginnings with as much romance as I could find in Paris or Rome 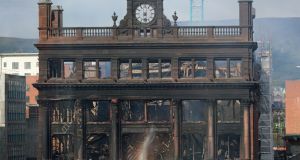 Fire hoses are used to spray water to dampen burning embers inside the Primark store in the historic five-storey Bank Buildings in Belfast city centre, where a major blaze broke out on Tuesday of this week. Photograph: Liam McBurney/PA Wire

There was a fire in Belfast this week. Raging flames consumed the beautiful 18th century Bank Building in the city centre where I used to shop in Primark before buying a prawn sandwich in Marks & Spencer and eating it – when the rain stayed off, which wasn’t often, but that’s Belfast for you – on the grass outside City Hall.

I saw news of the fire on social media, and it hit me more deeply because we’d just come back from a family weekend up there. Belfast always goes deep with me. I’ve never seen Paris or Rome, but I lived and cried and loved and laughed in Belfast town. And though I left it years ago, dragging my Northern Protestant fella back home to Dublin, Belfast never left me.

This is the city that helped mend my badly broken heart. It’s the place that helped me realise the world hadn’t ended, just my relationship. It was where I was living when I fell in love again and learned to play killer pool in Lavery’s bar with new friends and watched the tiny television in Fanum House, the old Irish Times office, as two planes crashed into two towers. The turbulent history of the city notwithstanding, for me it’s a place of new beginnings with as much romance as I imagine I could ever find in Paris or Rome.

My children, when we arrive up in Belfast, are full of wonder that their father and I appear to know this place so intimately. (They think nothing ever happened to their parents before they existed. It’s adorable). Look, that’s where we used to eat vodka-infused spaghetti at lunchtime, and that’s where your father saw his first cafetiere (long story), and that’s where... well some origin stories are more difficult to explain.

We check in to our hotel – the extremely swish Grand Central on Bedford Street – and in the room they taste Yellow Man for the first time, that Northern Ireland honeycomb delicacy their Dad loves. And we gasp at the view from the 23rd floor of the hotel’s Observatory Bar, where I point out the Harland & Wolff cranes and Cave Hill mountain that looks like the face of a sleeping giant. I explain that it was reputedly the inspiration for Jonathan Swift’s Gulliver’s Travels, and their blank faces don’t spoil my parental pride at having been able to dredge up that bit of trivia.

We have lunch, perched on high stools in the hotel cafe. One daughter who bravely had four teeth extracted the day before is sadly limited to “soft” foods. But we are on a last adventure before the summer ends and school beckons. Teeth (or no teeth to be more accurate), we are ready to play.

We visit the fascinating Titanic exhibition, take a tour of the SS Nomadic, head across to the best children’s discovery centre I’ve ever been in – W5 – and later we have dinner in a lovely Italian.

The next day, my partner’s sister, a civil servant who works in Belfast, is having a christening for her son in the city. She tells me she’s frustrated by the fact that since its powersharing executive collapsed, Northern Ireland now holds a record for going the longest period without a properly functioning government. This unhappy accolade got Belgium into the Guinness Book of Records, and now, 590-odd days without a government later, Northern Ireland has snatched that thorny crown.

But life goes on up here, it always has. My daughters sing in the church and then we all head to Maryville House on the Lisburn Road for afternoon tea where, to my partner's sister's slight surprise (“I had my suspicions”) a ring is produced and she receives a marriage proposal. We all cheer and her mother Queenie beams regally and we eat tiny cakes, and I sing Caledonia:

“Let me tell you that I love you ... that I think about you all the time.”

Bring your family to Belfast, if you’ve never been. Show this wonderful city off to the small people in your life. For a day. Or a couple of days. Not because of that devastating fire or because it’s a city desperately seeking a government, but because it’s one of the greatest places on this Island.

Honestly, everybody is so kind and friendly and it’s just somehow different there. It’s a place apart, it’s cool and endlessly interesting. And there’s that mountain on the skyline that looks like Gulliver sleeping, which is worth the trip alone.

There’s a charm to this city that for my money you can’t find anywhere else. It’s there even when it rains, and yes it did rain. But then, like I said, that’s beautiful Belfast for you.

Some things to do with children in Belfast ...

We were really excited to visit this exhibition for the first time, and I know I’ll be back again because there is so much to see. The whole Titanic Quarter has been so beautifully developed, you could easily spend the whole day here. The Titanic Belfast, that iconic building which has become a leading tourist attraction, extends over nine interactive galleries, drawing together special effects, dark rides, full-scale reconstructions and innovative interactive features. You get to explore the shipyard, travel to the depths of the ocean and uncover the story of the doomed RMS Titanic, which sank in 1912.

We also took the chance to tour what is the last remaining White Star vessel and Titanic’s original tender ship – SS Nomadic. The voice recordings of survivors from the Titanic were a highlight of the whole exhibition for me. I’ll definitely bring my daughters back when they are older, when I know they’ll get even more out of the experience.

The children don’t remember, but we brought them here when they were very small. They loved it then, but aged nine this time around there was so much more for them to do. As a bonus, it’s a short stroll along the docks from the Titanic exhibition. You can while away several deceptively educational hours in W5.

Our two experimented with magnets, helped out on a play construction site, played a magical harp and spent a long time “walking with dinosaurs” in the temporary exhibition on the top floor. The Dinosaur Encounter only runs until today (Friday, August 31st), but even without the dinosaurs this is still one of the best interactive centres for children we’ve ever visited. A new addition to the centre, out-of-this-world virtual reality games in the gift shop, are also worth a spin. W5, 2 Queens Quay, Belfast, w5online.co.uk

When I lived in Belfast I loved coming here, and it’s as vibrant now as it ever was. It’s an indoor space – there’s been a market on this site since 1604 – and it’s great for getting out of the Belfast showers. You’ll find a great, cheap lunch here and the tastiest cakes and buns. The market is open on Friday, Saturday and Sunday, selling everything from unique gifts, crafts and groceries to collectables and antiques. George’s Market. East Bridge Street, Belfast visitbelfast.com

We always eat very well in Belfast. Home restaurant is a favourite, and Mourne Seafood Bar never disappoints. Fratelli’s on Great Victoria Street was a new discovery. The daughter recovering from the tooth extractions was distracted by the chef’s hat and apron waiting on the table. The kids get to assemble their own pizzas at the table before they are sent off to be fired in the oven by gorgeous and attentive staff.