I watched the hurling final despite my ignorance. Limerick’s win was humbling 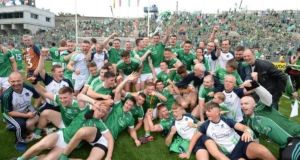 “As I watched, the heart of every Limerick fan pounded in my chest.” Photograph: Dara Mac Donaill

We are all prejudiced in various ways. As I age, certain of my own prejudices become more obvious to me, and it is clear that to some extent I have carried a disfavour toward some aspects of Irish culture since I was quite small. On the one hand, I am proud to be Irish, though I can’t quite satisfactorily present you with the necessary and sufficient conditions of what that term means, and nor can anyone else.

Irishness is not merely being born here, nor necessarily being raised here, nor always both of those in conjunction. It is not speaking the native language fluently (a vast majority of us can’t). It is not eating soda bread, nor buying buttermilk in litre cartons, a practice that baffles the British, for example, nor playing or watching GAA. Irishness is not any of those things, though it can include some of them.

On the other hand, like many people who have gone through the Irish school system, I have a problem with compulsion, and this has influenced how I think about and interact with the culture I inherited. Growing up, I believed that if a language, for example, could be kept alive only through forced learning and use, then it should rightly be left to peter out. I still have significant sympathy for that position. Hurling was something I resisted ever developing an interest in because I associated it with school and religion; two things that always made me feel deeply uncomfortable. This was my error, and I excluded myself from something that was important to my community, and a source of fun and excitement, as a result.

Last week, more than one in two of the population of Limerick city left their homes to welcome their victorious hurling team back after an All Ireland final that was so tense fans of every bent were hysterical by the end of it. I watched the final after my partner, who is English and enjoys the sport, suggested that I could be no decent Limerickwoman and let the historic event pass unseen.

I was reluctant, because I had decided how I felt about the sport as a young girl, and never felt the need to re-examine that judgement. Sporting bandwagoners also grind my gears intensely. Mixed Martial Arts is the only sport I enjoy with consistency and immersion, and every time a McGregor fight rolls round (which is now approximately every 20 years), I find it tedious that everyone I meet is suddenly an MMA expert. Friends who love football expressed the same irritation during the World Cup, when the inner anti-British sentiments and footballing expertise roared out of every Irish mouth at televisions countrywide.

I had not invested in the Limerick hurling team. As a sporting fan, there is a sense of connection and investment that goes with supporting a team or individual. Their actions connect you to other fans of the sport. Their losses can squeeze tears from the most stoic people, as can their wins. Sport – both in participation and spectatorship – produces unique psychological effects and experiences.

That match showed me my own prejudice, and it looked stupid and inappropriate juxtaposed with the furious pace of the game

Philosophically speaking, the state of connection and shared experience that sport can create between huge numbers of disparate people is mysterious and interesting. I had not attended a single Limerick match, could barely remember the rules of the game.

I had not suffered for and benefitted from a relationship to the game and to the team like a true fan, so I did not feel entitled to sit during that match so tensely that you could have removed the chair from under me and I would have remained there, suspended in the air, knees bent, fingernails biting into my palms.

Sport is tribal. I was pulled in despite my ignorance and my reticence. As I watched, the heart of every Limerick fan pounded in my chest. In the moment, I was lifted out of myself and into the collective, and made greater.

Watching that match showed me my own prejudice, and it looked stupid and inappropriate juxtaposed with the furious pace of the game, and the joy and cohesion it gave to my home town. Limerick people took the opportunity to feel proud of where they came from, and I was humbled. More than just the team came home last week.

Life is busy. This can be difficult for a new vegetarian such as me
3

Life as a carer: ‘If something happens to me, what will happen to my girls?’
5

Put a spring in your step for running in February
8

Are almonds bad for the environment?
10