Solitary car journeys leave me feeling like a new woman

Niamh Towey: We need time to ourselves to try to piece together all of life’s big puzzles 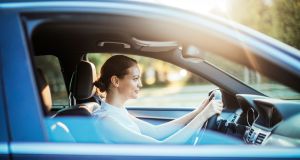 Driving solo: “I’ve wrestled with my relationship with religion, come up with ideas for a novel I may never write and considered where I want to be in five, 10, 15 years’ time.” Photograph: iStock

I always tell people that I felt like a new woman after I bought my first car, about three years ago.

It was a dodgy little 1.4-litre petrol car that liked to conk out on steep hills and in heavy traffic and could lose its exhaust pipe at any given time.

I bought it from a man in Elphin who had multiple cars parked in his front garden and had chickens pecking at the tyres.

I didn’t try to negotiate the price with him because I thought that was rude, and I never looked under the bonnet before I drove away in it because it didn’t even cross my mind that that might be a sensible thing to do.

I was so desperate to get a set of wheels under me he probably could have sold me Fred Flintstone’s car and I’d have been happy out.

I never regretted it, though. I remember driving it home from Elphin with a chest full of pride and a mind opening to all the opportunities ahead.

It had a CD player, too, which was a nice addition. The wipers were automatic and so were the lights – but the steering wheel shook like someone on opioid withdrawal as soon as it went into fifth gear.

None of that really mattered to me, though, because it was mine. I could drive it whenever I wanted, go wherever I pleased – no more asking my parents for a lift or taking two buses to Liffey Valley.

We need that time to ourselves – uninterrupted time with our thoughts

What I hadn’t realised at that point, however, was how much headspace I’d get from long journeys on my own.

I had never had that before, because there was always someone else in the car with me. But now it was just me, the CD player and the road – nobody to talk to, no messages to check or social feeds to scroll through or menial jobs to get done.

No guilt about just sitting there, alone, with nothing but my thoughts and maybe a CD I’d recovered from my teenage years – back when I used to actually buy such things.

This year I bought a new car (well, new to me) and it can play music or audiobooks from my phone, through Bluetooth. That has been a revelation.

I feel like a teenager again, sitting alone with just my thoughts and some music or a book – no social media to distract me from solving all of life’s problems in my head.

I remember watching my mum do it when we were little, she would talk to herself on long journeys in the car, without using words – just hand gestures and facial expressions.

We thought she was mad, but now that I do it too I see it’s the one thing that actually stops me from going insane.

We need that time to ourselves – uninterrupted time with our thoughts. When you’re in the car on a two-hour journey down home, there’s nowhere you can hide from them.

You can’t mindlessly scroll through Instagram or get lost in a WhatsApp group chat. You can’t iron the clothes or cook tomorrow’s lunch or reply to work emails.

All you can do is wrestle with your own mind, form and shape your ideas into something coherent, connect the dots to what might be bothering you, or inspiring you, or making you feel proud.

I’ve written so many of these columns in my head on the road. It has been my source of inspiration and understanding, a light of coherence in a world so muddied by outside influence.

I’ve plotted out possible career paths, solved friendship problems and come to terms with where I’m at in life, all in the car.

I’ve wrestled with my relationship with religion, come up with ideas for a novel I may never write and considered where I want to be in five, 10, 15 years’ time.

Of course you don’t have to own a car to achieve such things. Plugging your earphones in on a walk has similar effect, or reading a book on the bus.

Some people find the same headspace when running, though I’m normally too busy trying not to keel over that it doesn’t really work for me.

Anything to save you from the monotony of your phone or the endless list of jobs you feel obliged to be at when you’re home alone seems to me like a pretty healthy way to spend an hour.

Every time I step out of the car after driving home alone I feel the same – like a weight has been lifted, a problem has been halved – like I’ve pieced together another bit of life’s big puzzle.

Pyramid or plate, carbs or veggies: What really is the ideal diet?
6

‘You guys are amazing’: Matt Damon’s message of support to Temple Street children, families and staff
7