‘At least everyone has the basics in Ireland. That’s why I’m living here’

New to the Parish: Senthil Kumar Ramasamy arrived in Waterford from India in 2000 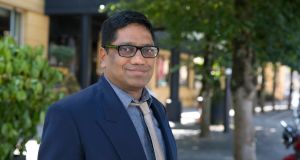 Senthil Kumar Ramasamy in Waterford City: “I became interested in Irish politics when I came here and that’s why I wanted to learn about the Irish legal system.” Picture: Patrick Browne

When Senthil Kumar Ramasamy was 20 years old he spent a few weeks helping his uncle canvass for the general election in the southern Indian state of Tamil Nadu. The young student spent each day walking from door to door, meeting with local constituents and learning of the many problems affecting their daily lives. Watching his uncle sit in people’s homes and listen to the changes they wanted to see in their society, Ramasamy developed an appreciation for the importance of local politics and began to consider a future career as a politician. However, he never could have imagined that a decade later he would find himself walking around the streets of a small city called Waterford, canvassing for a seat in the Irish local elections.

“When I did the door-to-door canvassing in India I was very enthusiastic to meet and talk with different people, to see how my uncle was dealing with their problems and how he reacted to the public. I was interested in local politics but also national and world politics. I’ve loved politics since I was a child and first learned about it in India. We can understand the world better by understanding its political atmosphere. I became interested in Irish politics when I came here and that’s why I wanted to learn about the Irish legal system.”

When Ramasamy first arrived in Ireland in 2000, contesting a seat in an election couldn’t have been further from his mind. His focus was working hard and setting up a life for himself in this new, foreign country. He knew very little about Ireland before arriving, only that it was near London, where his brother lived. Ramasamy had been working for an IT company in Malaysia for four years when he spotted an online advertisement looking for staff in a restaurant called the Kylemore cafe in Ireland.

“I didn’t want to be stuck in the same country and wanted to see a different part of the world. I applied for the job from Malaysia, had an interview over the phone and was selected.”

Ramasamy arrived in Waterford in December 2000 where he began his new job in the local Kylemore cafe. “I was the first foreigner to work there and all the staff were women, I was the only man. They were all very good to me, although the Waterford accent was very difficult to understand.”

Initially Ramasamy felt lonely living in a city where he often stood out as a foreigner. However, as time passed people from countries such as Bangladesh, Myanmar and Pakistan began to move into the area. “I didn’t mix with people much at the start, I just did my work and went home. It took two years to make friends. I don’t know how long I could have stayed if I had no friends. It would have been very difficult for me.”

He admits that he struggled to mix with his work colleagues because of cultural difference. “I come from a strict orthodox Hindu family so we don’t go out drinking. The manager would often call me to go for drinks after work and was confused when I didn’t turn up.”

Ramasamy says he never explained to his colleagues why he did not join them in the pub after work as he was never asked. “They did not ask so I did not explain. Maybe they thought I was rude but I’m not a rude person, it’s just my culture was different. But over time I went to pubs with friends to see what it was like.”

Knowledge is like food for me. I don’t want to ever stop, I want to keep learning

Ramasamy spent six years working in the Kylemore cafe before finding a job in the IT sector. He was also eager to return to his studies and enrolled in a course in international trade law at Waterford Institute of Technology.

“I studied law in India and I really liked that field. Working in the same thing can be quite boring and I wanted to keep developing my knowledge. Knowledge is like food for me. I don’t want to ever stop, I want to keep learning.”

In 2009, after nine years living in the country, Ramasamy decided to follow his passion for politics and ran in the Irish local elections. He spent nearly €4,000 of his own money printing leaflets, banners and posters and visiting homes in the local area. His proposed policy changes included reducing the cost of parking in Waterford city, reducing the cost of motor tax and introducing more CCTV cameras in the area to help reduce the crime rate. While he only received 50 first preference votes, he was happy with the experience he gained during the electoral process and plans to run in next year’s local elections. He recently joined the Fine Gael party but says he’ll run as an Independent if he cannot secure a party seat.

“I know now how elections here work and also understand the counting process. I also like the system of law here in Ireland. Politicians are not supreme here, law is supreme and people respect the law. In other countries there is a lot of corruption; there’s a better legal system in Ireland.”

Ramasamy recently began volunteering with the Places of Sanctuary integration network and also helps out at the Waterford Immigration Network where he often meets people who have lived or are currently living in direct provision. Having heard of the struggles people often encounter in these hostels, he now plans to campaign for a new system of housing for asylum seekers when he runs in the upcoming local elections. He also wants to focus on family reunification for immigrants and improving the housing supply for Irish citizens and immigrants.

“Direct provision should be abolished or modernised. People feel they are like slaves in direct provision and everyone needs freedom. Many of these people are also suffering with unemployment and without good accommodation.”

Despite the shortcomings of the immigration system, Ramasamy says overall he’s found Ireland to be a very welcoming place for new arrivals. “If you compare Ireland with other countries it’s doing a lot better. It’s providing immigrants with food, shelter and social welfare which are the basic needs of a human being. Shelter is very difficult in India, at least everyone has the basics here. That’s the reason I’m living here, because it gives you a decent way of life.”

What can you buy for €275k in Portugal, Spain, France, Greece, and north Co Dublin?
4