Jennifer O'Connell: We’re living in a golden age of TV. Try telling that to RTÉ

The days of ‘We’ll make it home in time for the Late Late’ are gone, and so are those audiences 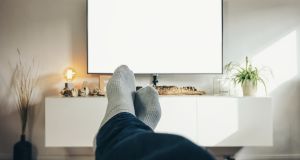 Every media company in the world is facing the same challenges, and many are proving much better at tackling them than RTÉ. Photograph: iStock

We’ll never see his like again. That phrase, trotted out whenever a much-loved figure dies, is both incontestably true and utterly meaningless. But in the case of Gay Byrne, it’s more than just another hackneyed Shakespearean cliche reinvented by Game of Thrones.

We don’t make broadcasters like Byrne any more – not only because of his incomparable talents – but because the world that created him as a broadcasting phenomenon no longer exists.

Byrne stopped presenting The Late Late Show in late 1999, precisely one year after Larry Page and Sergey Brin launched Google in a garage in Menlo Park, and Marc Randolph and Reed Hastings started the world’s first online DVD rental shop up the road in Scott’s Valley, a service they called Netflix. Your timing, Gaybo, was always impeccable.

Society has changed utterly in the meantime. Thanks to Page, Brin, Randolph and Hastings, audiences are more spoilt, crankier, more easily distracted. We’re living in a golden age for TV – though try telling that to RTÉ. The awkward reminders of its declining dominance were everywhere in the coverage of Byrne’s death. His production team reminisced about the 75 per cent audience share it regularly commanded – a feat managed these days only by the Toy Show. His team recalled how he would say, “I want to speak to all 850,000 listeners.” In the most recent JNLR figures, Ryan Tubridy pulled in 334,000 listeners and Seán O’Rourke had 315,000.

The days of “We’ll make it home in time for the Late Late” and “turn that rubbish off” whenever sex was mentioned – when nobody ever actually did turn off – are gone. Those days aren’t coming back, and neither are those audiences.

To take this week as an example, I’ve been watching a Swedish crime drama series on Netflix, catching up with The Affair on Now TV, listening to the Fred and Rose West story on podcast and working my way though an audiobook of an Andrea Levy novel. I’ve also watched Dublin Murders on RTÉ, Prime Time and Claire Byrne Live, and listened to Morning Ireland, but I’m probably not a typical consumer – not least because I actually believe we need public service broadcasting and am happy to pay for it. It’s how we communicate with, and about, ourselves; reflect our stories; maintain those senses of humour and outrage that defines us.

RTÉ’s survival requires a dramatic reinvention, and not just by moving Lyric, selling off the Guide, or trimming Tubridy’s salary. In all the talk of headcounts and pay cuts and freezes and one for everyone in the audience, there was very little discussion of the biggest challenge of all. Namely, how to persuade the public that public service broadcasting is still worth paying for. Or even tuning in for. In its place, there was more of that same sense of entitlement that informs the terminally irritating ad campaign, which insists paying for RTÉ is “one of the terms and conditions of life in Ireland”. The Government needs to make the public stump up because we said so.

Director general Dee Forbes has fallen into a trap Gay Byrne never would have, and forgotten who her audience is. So much of the messaging about “the broken licence fee system” has been aimed at getting the Government on side, when it is really the public that needs to be persuaded. It’s not an easy sell, of course. Thirteen per cent of us already choose not to pay the €160 licence fee. Ten per cent don’t even own a TV. Young people are switching off faster than even the most dire predictions.

The reality RTÉ management conveniently avoids acknowledging is that every media company in the world is facing the same challenges, and many are proving much better at tackling them. People will pay for content if they can see the value in it. Yet, in all of the media interviews and staff briefings, there was very little talk of how that value might be demonstrated or how RTÉ’s output could be reinvented.

In Britain, culture secretary Nicky Morgan recently said the universal licence fee could eventually be scrapped and replaced with a Netflix-style subscription service, which seems a fairer and more easily enforced – if less lucrative – system than the device charge RTÉ would like to impose. Of course, the clunky Player would need to be fixed first.

There aren’t going to be any quick solutions. The Taoiseach has said it would be possible for the Revenue Commissioners to start collecting the licence fee, but it can’t happen for about five years because it would need to be made into a tax first. “It would have to become something like a household media tax. That’s the kind of thing we could do.”

But then he added something else that RTÉ probably won’t have been quite so pleased to hear. “We also have to consider the fact that there is more to public service broadcasting that just RTÉ, and I think that would have to be part of this debate as well.”

Be careful what you wish for, RTÉ.