A journey through ancient isles, myths and deadly seas along the western coast of Ireland 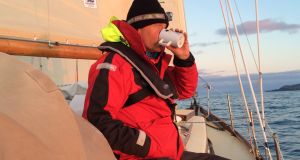 The Summer Isles author Philip Marsden on board his wooden boat. Philip sailed over from Cornwall to Dingle, the starting point of his adventure for his book

My first on-board visitor was Danny Sheehy. Poet, boat-builder, fisherman and farmer, Danny was also the veteran of several epic sea voyages. When I’d introduced myself on the phone, I told him I’d just arrived in Dingle harbour from Cornwall, that I’d sailed over in a wooden boat and that I was researching a book about mythical islands.

I’m not sure which of those things it was that persuaded him to drop whatever he was doing – but within an hour, in navy reefer and Breton cap, he was striding down the pontoon, swinging one leg up over the guardrail of my boat, and presenting me with a bunch of narcissi, a bag of salad, some herbs in a rubber band, and five heads of purple-sprouting broccoli.

“From my own garden,” he said with a grin. “It’ll help with the scurvy.”

We sat in the saloon and talked boat-talk – about the passage over, about rigs and hull design and the ups and downs of being at sea.

I asked Danny if he was ever nervous. He looked serious for the first time. “Lagachar corp agus lagachar aigne, agus lagachar eile a bheith dian ar an bhfarraige” – “Weakness of body and weakness of mind, and another weakness is to have no fear of the sea.”

For me, it was the start of a voyage that was due to take me up the west coast of Ireland and on to the north of Scotland. I’d recruited a friend to come with me from Cornwall, but he’d gone now, and I was alone with an acute awareness of the miles ahead. Danny was the first of many along the Irish coast who knew its dangers and went out of their way to offer support and friendship to a single-handed stranger.

He had many sea-miles under his belt: he had already sailed with others up to Iceland in the wake of St Brendan; he had rowed round Ireland. He was now on a pilgrimage to Santiago de Compostela, paddling to Corunna from Dublin over several summers, with a crew of three musicians in a naomhóg he had built himself. They had reached Spain the year before and left the boat there for the winter. They were due to join it again the following week.

He blessed the boat as he left, laying a hand on the mast and reciting a prayer: “As I cross the deep ocean,/ O king of patience, take me by the hand./ And if the seas grow too steep,/ Holy Mary, look down upon me, do not leave me.”

A few days later he headed south to Spain; I set off northwards, up Blasket Sound to Fenit. Over the next couple of weeks, I sailed on up the coasts of Kerry, Clare and Galway, from the Shannon estuary to Aran and on around Slyne Head to Inishbofin. It was in Inishbofin that I hit my first full gale.

The island’s harbour is one of the safest along the entire west coast, and I was glad of it. The forecast was for 45-plus knots of wind. I was alone in an outer anchorage, tucked in beneath the grim ruins of Cromwell’s barracks. Up on deck, I tied down everything that was loose and hunkered in the cabin to wait.

The day before I had met Dermot Concannon, skipper of the island’s ferry, and now he called to check I was okay: “If you need another mooring line to put out, I can let you have one.” I said I was all right for now. As the wind built through that afternoon, as it began to howl and pummel the boat like a hidden fist, I had the reassuring sense that eyes were watching me from on shore.

Dermot himself had good reason to be wary of the sea. His own grandfather had been caught in the storm that struck this coast on the night of October 28th, 1927. Earlier that day, the weather had given little clue of what was coming; all along the inner waters of Galway and Mayo, currachs were out fishing. The wind came so suddenly that few boats made it back to shelter. In all, 454 men were lost that night; 10 died from Inishbofin, while from the small village of Rossadilisk opposite, on the mainland, 16 were drowned. Dermot’s grandfather tried to protect himself and his crew by holding the nets from the bows as a sea anchor. His hands were cut to pieces; he was blind for several weeks from the spray. But he survived.

I rounded Achill head in a heavy Atlantic swell and anchored off the Inishkeas. Low-lying, thick with sand-dunes and roofless ruins, the two islands once had a population of more than 200. But they are now deserted. The same storm of 1927 struck the fishing fleet here. Nine men were lost and the heart was ripped out of the community. Within a decade or two, the islanders had all left for the mainland.

It would be wrong to suggest that this seaboard is all danger and gloom. Its rewards help offset the risks. It’s not easy to forget the day I spent on the north island of the Inishkeas, guided by the work of Francoise Henry, that great pioneer of the wonders of Ireland’s medieval art, who discovered the traces of an early Christian purple-dye factory. Or the day crossing Donegal Bay and the sheer scale of its seascape, the distant shores of Mayo and Sligo, and bare Ben Bulben just a dimple on the skyline. Or recalling from Yeats’s memoir the surprisingly tough boyhood adventures he had sailing on these waters. Or of landing on the beach of Inishkeel, Donegal’s holiest site, an island like many similar ones where it’s possible to sense something of the mad courage of the early monks.

But for all the antiquity and the hauntings of abandoned islands, it is the people of the coast I remember best. The artist Maria Simonds-Gooding down in Kerry with her pure distillations of landscape and her studio view of Blasket Sound; Cormac Gillespie up in the Rosses of Donegal and the evening we spent poring over the dictionary he’d assembled of maritime terms in Donegal Irish, and sharing our love for the work of Flann O’Brien; the enthusiasts of Clifden boat club; and Conan Breslin, who came out in a small boat to meet me, with another gale building in the darkness, to pilot me through the sandbank labyrinth of Bunbeg harbour (I had engine trouble and had limped round from Burtonport, my mind unable to forget the matchstick repair I’d done to fix a vital bracket).

It was Brian McDonald who I went to for repairs, further along the coast at Greencastle. McDonalds have been building boats on Lough Foyle for six generations, and the harbours of the north coast are full of McDonald Trondheims, fine working boats whose design originated in Norway. Quiet-spoken and competent, Brian had rarely been to sea himself, but he knew instinctively of how a boat must sit in the water. He came out to the harbour wall to wave me off to Scotland and the coast of Islay.

Scotland’s west coast is historically, ethnically, linguistically – even geologically – closely linked to Ireland. It looks similar and has the same roller-coaster weather. But there was less of the immediacy of the welcome I’d had in Ireland.

On a damp morning, I rounded Ardnamurchan Point, and headed north towards the Hebrides. The wind was dropping and my boat was wallowing in the swells. I was standing at the helm, feeling drowsy when an email pinged into my phone. It came from a friend down in Kerry. “Philip, I am sorry to bring the very sad news of Danny Sheehy’s death . . .” His naomhóg had capsized off the Iberian coast and all four of them were in the water. Danny became ill before reaching the shore and it is believed he had a heart attack.

I looked out the oily waters, towards the shapes of Rum and Canna, and I recalled the words of his own blessing: “As I cross the deep ocean,/ O king of patience, take me by the hand./ And if the seas grow too steep,/ Holy Mary, look down upon me, do not leave me.’

The Summer Isles: A Voyage of the Imagination by Philip Marsden is published by Granta

The Kerryman working for a charity in Melbourne: 'It's a challenging time'
5