Rapper’s hint at running for White House may not be just a stunt. Remember Trump? 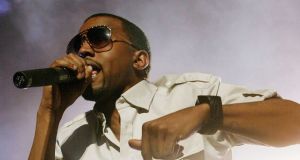 Kanye West: Mainstream US media is falling into the same trap with him as Trump. It’s alternately ignoring him, and treating him like the punchline to a grim, postmodern joke. Photograph: ShowBizIreland/Getty Images

“I realised I was listening to one of the most important cultural messages we need at this moment in American history. Kanye’s counter-cultural voice is desperately needed,” goes one rapturous review of Kanye West’s new album, Jesus is King.

“Every second I spend listening to it, my mind is focused on the Holy One. I see Jesus glorified throughout every track.”

That second line is a clue that the review didn’t come from Rolling Stone or NME. Instead, it emerged on that somewhat less well-known rap-lovers’ bible, the website of the organisation Concerned Women for America.

As its name might hint, this is an evangelical Christian non-profit, normally associated with its stands against feminism, same-sex marriage, stem cell research, pornography, cloning, gambling, sex education and – sure, why not while they’re at it – evolution. And now its reviews of rap albums.

The reinvention of Kanye West – rapper, tweet-happy pseudo-philosopher, purveyor of such wisdoms as “slavery is a choice”, husband of a Kardashian, and more recently, icon of the alt-right – is complete. He has stopped hinting that he might run for president of the United States in 2024 (in January this year, he tweeted simply “2024”), and has started just declaring it outright.

“There will be a time when I will be the president of the US,” he confidently predicted in an interview with an Apple Music show, Beats 1, while sitting overlooking his private lake surrounded by a herd of gambolling deers on his “multithousand acre property” in Wyoming. He also reveals in the interview that he didn’t like the property when he first saw it, but then noticed that it matched his colour palette. “I was like, these are the Yeezy tones right here”, Yeezy being the brand of €300 footwear he flogs with Adidas. The right to own land matching your expensive runners could make for a compelling election promise.

And he has been obliging them with plenty of evidence of this reinvention. He recently said he tried to ban premarital sex among people working on the album. He also denounced abortion and the morning-after pill, accused Democrats of brainwashing black people, and said that God had given him a $68 million tax refund. It’s astonishing how many extremely rich people subscribe to the belief that the richer you are, the more God loves you. Or perhaps it’s not astonishing at all.

“Kanye pretended to be who he wasn’t – to show you who he really is,” explains Mike Cernovich, the alt-right, anti-feminist conspiracy theorist, predicting that “Kanye could bring the races together.”

The idea of the rapper putting himself forward for nomination seems ridiculous, surreal, daft – and, simultaneously, sort of inevitable. What could be a more natural conclusion to a decade in which the global news agenda dissolved into a dark, Dadaist comedy, a time when “charlatan/joker/narcissist/no political experience or identifiable policies whatsoever” became part of the job description for any sort of serious run at high-profile high office?

Troublingly, the mainstream US media is falling into exactly the same trap with West that it fell into with Trump. It’s alternately ignoring him, and treating him like the punchline to a grim, postmodern joke, while clinging to the hope that something shiny will come along before 2024 to distract him before the country embarrasses itself any further. Because nobody is actually all that sure America will be ready to put a grown-up in charge by then.

On the subject of his own greatness, unlimited messianic potential and his belief in the direct line his creator has to his bank balance, Kanye is deadly serious. With his pseudo-philosophical, self-help musings; his disregard for facts, history or science; his love of conspiracy theories; his paranoia; his parasitic relationship with the media and the astonishing depths of his own self-belief, it’s hard to imagine, in fact, a more appropriate emblem for this age we’re in. I suspect his ambitions don’t stop at being the next Donald Trump. He fancies himself as the next Jesus Christ.