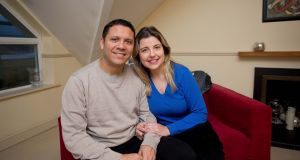 Suellen Machado and her husband, Alexsandro Ribas: “I miss my family and friends but even my parents say, ‘oh, I prefer that you are in Ireland’ because Brazil is so dangerous now,” Suellen says. Photograph: Tom Honan

Suellen Machado and her husband, Alexsandro Ribou, left Brazil more than two years ago in the midst of a deep political crisis in their home country.

Former president Dilma Rousseff was impeached in August 2016, swathes of the country’s politicians were implicated in a corruption scandal and the economy had slumped considerably.

Suellen had always wanted to travel, and this seemed like a good time to go.

“Since I was a teenager I always had this dream to live abroad, it was my purpose to have this different experience, but of course the economic situation was part of my decision too,” she says.

Ireland was not their first stop, however. Alexsandro had received a job offer at an IT company in Angola, Africa, and the pair decided to go together.

“Angola is a Portuguese colony and they are hiring a lot of Brazilians over there because we have the language and they don’t have many highly qualified professionals,” says Suellen, who ended up working as a marketing lecturer there.

Angola was very different to Ireland, she says. “It is much more dangerous in Angola. They are not used to foreigners in general. As a woman you always need to be careful. I didn’t go out alone over there. You feel you are different, that is the first time I ever felt like that.

We worked for a government company, so they looked after us and gave us advice

“Brazil is a very multicultural place, we have lots of immigration there – we are used to that environment.

“In Angola, they look at you like you’re so different. Usually, though, they are really friendly and welcoming in general, but you need to be careful about their culture. We worked for a government company, so they looked after us and gave us advice.

“It really opened my eyes to see how different things can be,” says Suellen.

The couple decided they would save up their money and move on somewhere else, considering Ireland, Canada and Australia because of the short visa process these countries had for IT people.

They decided on Ireland because of the career opportunities they saw for IT professionals and moved to Dublin in November 2016.

Suellen works as a digital marketing specialist at New Horizons while Alexsandro works in Sandyford. They live in the city centre.

Our money goes on rent and bills, we are on a real budget

“It is quite expensive here,” says Suellen, laughing. “It was a battle to find a place to live. I was going to so many viewings with 30 or more couples. It was a real battle and for me this was a surprise, how difficult it was to rent a place.

“I didn’t expect this – even if you have the money to rent a place, you still can’t do it”.

She says that although their English has improved they have learned to accept that this move had set their career back a step or two.

“Once you make this move you need to realise you are taking three or four years back from a career perspective.

“Our money goes on rent and bills, we are on a real budget. I was kind of prepared for that, I expected the wage drop.”

She says they feel very welcome here and that the Irish people are similar to Brazilians in that they are friendly and like to talk.

“I didn’t feel like a stranger when I arrived – Ireland is open to different cultures. They say there are over 30,000 Brazilians in Ireland, so there’s a large community here.

“I used to say that even if you are homesick you can get everything you want from Brazil right here on Capel Street!”

The couple do not have any plans to return home to live any time soon, given the current economic situation.

In Brazil politics is a family business, you see the same surnames from 40 and 50 years ago

“I can’t say I feel positive about the future in Brazil. Maybe in 10 years’ time, if they’re still cleaning up politics, maybe it will be better.

“Last year we had an impeachment and the vice-president took over and people thought, ‘oh, maybe it’s going to be better’, but really it’s still the same corrupt environment.

“They are trying to clean off these politicians who used to be corrupt but in Brazil politics is a family business, you see the same surnames from 40 and 50 years ago – so of course cleaning that up takes time, because there is nobody else.”

Her country is now very different to the one she grew up in.

“My city used to be totally different. I grew up riding bicycles and playing outside with my friends with no worries. In the last five or six years this totally changed. There is much more small crime and theft. I can’t say now that it is safe in my country.”

She also thinks that the difficulty of getting a good education in Brazil does not bode well for the country’s future.

“Anybody who has even a little bit of money prefer to send their kids to a private elementary and high school because it is a better education.

“The public universities are the best but they are very difficult to get into. My sister is studying to be a nurse at a private university and is paying maybe €1,000 a month in fees.”

When Suellen was studying for her masters in Brazil she worked during the day and went to class at night in order to pay her fees.

“Teachers have a very low salary, which is unbelievable because these are teaching the next generation.

“I think the economic and political crisis is a result of that lack of investment in education,” Suellen says.

The political crisis has also had a devastating effect on the standard of living there, as Suellen demonstrates with the story of her mother’s job.

“My mum works for the government. To see how bad things are, in the past these government jobs used to be the best job – you had the best wage, lots of rights.

“In the last year and a half she has been receiving less than 30 per cent of her wage because the country has no money.”

Alexsandro’s father also used to work for the government and he has had his pension put on hold.

“I miss my family and friends but even my parents say, ‘oh, I prefer that you are in Ireland’ because Brazil is so dangerous now,” she says.

There is hope though, she says:

“Maybe in 10 years’ time, if they’re still cleaning up politics, maybe it will be better.

“The population is growing, it’s a young country and multinational companies are looking for this kind of country.”