Engineer who was passionate about Dublin 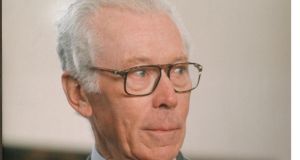 Joe McCullough: enthusiasm for the new in the capital, with a recognition of Dublin’s past gems

Joe McCullough, who has died on March 19th, 2017, at the age of 88, was an engineer with a keen interest in both modern building and conservation, paralleled in a questioning and logical mind and a fascination with history, especially that of Ireland.

Born in Dublin on June 28th, 1928, he was a strong supporter of the city, again from both a modern and historical perspective, being involved in projects such as Boland’s grain silos and Ballymun housing but also as chairman of An Taisce, working to keep Georgian quarters intact.

His interest in Ireland took in the whole island and he followed events in the North closely. As with most things he took an interest in, he not only discussed it – being passionate about ideas and solutions – but became actively involved, working with the SDLP and the Glencree Reconciliation Centre.

His interest and knowledge was not just intellectual, it was in his blood. His father Denis McCullough, from Belfast, was president of the IRB in the North during the 1916 Rising.

In fear of their lives due to sectarianism, Agnes and Denis moved to Dublin in the 1920s, where he opened a music shop – later combining with another business to become McCullough Piggot, opening first on Dawson Street (his son Joe loved music and poetry). Across the road Denis began the New Ireland insurance company. He also became a TD.

Joe, the second youngest of Agnes and Denis’s six children, grew up in Ranelagh, cycled to Scoil Mhuire in Parnell Square, and studied engineering at University College Dublin – where he met Nuala Duffy, a chemist, who he later married.

After graduating in 1949 he worked in mines and industry before getting a job with engineering firm Mouchel in London in 1953. In 1955 he and Nuala married and they returned to Ireland in 1956, where Joe ran Mouchel’s Irish operation, on projects that included the Boland’s silos.

In 1963 he set up Joseph McCullough and Partners whose work included the AIB headquarters, restoration of the Royal Hospital Kilmainham, and the World Bank in Saudi Arabia. A meeting with Fianna Fáil TD Neil Blaney resulted in Joe’s firm working on housing at Ballymun, where innovations included creating pre-cast panels on site. Although Ballymun later had problems, at the time it chimed with Joe’s optimism for the future and engagement in a modern Ireland, from which the slums were finally being cleared.

Combining this enthusiasm for the new, with a recognition of past gems, Joe became president of An Taisce in 1969-70, at a time when there was a grá for demolition in Dublin. It was not easy trying to bridge the two worlds. His work involved developing plans to conserve quarters of Georgian Dublin and to stop the Grand Canal being turned into a motorway: his interest extending to his home where there were maps of the city on the walls on which to explore ideas. He also loved walking with friends to discuss such things.

Other roles included being president of the IEI (Institute of Engineers Ireland) and Dublin Zoo, and a board member of CIÉ and the School of Irish Studies.

He had four children and 10 grandchildren, of whom he was fiercely proud, and who he delighted with his storytelling and ability to mimic.

He would take his children to site, with his eldest son, architect Niall, recalling, thrillingly, following his father across an open metal bridge between the Boland’s towers. More recently Joe and Niall went back to Grand Canal Dock to see Joe’s Modernist warehouses before they were demolished. Niall said they could have been great art spaces but Joe replied that he was okay with demolition if it meant they would be replaced by something better. As ever, balancing old and new for a better Dublin.

He is survived by his wife Nuala, children Niall, Eoin, Conor and Elizabeth, and 10 grandchildren.