Blindboy Boatclub: I struggle with issues of guilt and shame 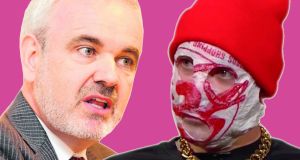 What is your perception of Rubberbandits?

Colm O’Gorman: Well the first time I became aware of you was Horse Outside, but my perception of you over the last few months is more those online exchanges than anything else. I just love the idea that what you do is that you get people to laugh at you and with you, and then you hit them over the head with something. For me, people will have a laugh, but at some point they have to think about the stuff that you’re saying.

Why do you think you’ve ended up doing what you do?

B: 10 per cent inspiration, 90 per cent perspiration… I always see humour as a great way to cut through something very serious. It cuts through solemnity.

C: A combination of life circumstances really. I had to confront experiences of child sexual abuse when I got to my late twenties, and opening that up revealed wider societal issues that meant I became an accidental activist and campaigner and it all developed from there.

B: To be scared of failing. Failure should be embraced, it’s a necessary facet of creativity.

C: To keep my head down and stay quiet, not to care “too much”. To “be good”, where that means behaving in line with and conforming to a demand to be silent about uncomfortable truths. Speaking out when one sees injustice or unfairness is sometimes tough, but staying quiet, compromising one’s values or denying one’s own humanity is debilitating and limiting on most every level.

What’s your idea of the perfect day?

B: Making a piece of work that I love.

C: A run on the beach, cooking a good meal, sharing it with the people I love. Or a day like May 23rd 2015, when the marriage referendum passed and people were dancing in the street with joy. That was pretty perfect.

What do you dislike most about the place you’re from?

B: The unfair and inaccurate reputation it has.

C: That’s tough. It depends upon what that means, and what time it refers to. For instance, the thing I dislike most about the place where I spent my childhood was the silencing of so much. Of abuse, of difference, or very ordinary examples of brutality in how society treated many people…women, LGBTI people, people with disabilities, people living in poverty.

What have you dreamed about doing for a long time that you still haven’t done?

B: Writing an album that has nothing to do with comedy or laughter.

C: Writing a novel. I’ve wanted to do that ever since my memoir was published in 2009.

Where is your favourite holiday or travel destination?

B: Cordoba in Spain.

C: Best family holiday we have had was a house swap in Carmaux in the South of France several years ago.

Who would you most like to receive a letter from?

What subject do you wish you studied in school and why?

B: Wish I paid more attention in history, because it’s class.

C: History. I dropped it for my Leaving Cert and I regret that. We don’t interrogate history nearly enough as a way to understand how we got to where we are or why the world works the way it does.

B: I remember being [in school at] seven years of age and it was before we had our first confession. I was acting the maggot in class, and the teacher who was a nun, got a clean jam jar, filled it full of water, put it up at the top of the class, and then said “this is Blindboy’s soul” and got a load of dirt from a pot and started throwing it in there. And I had to look at my dirty soul in a jam jar. She said that’s going to be clean next week when you talk to that man in the box, a stranger. My dad was pure socialist, he was a trade unionist, didn’t believe in religion. Luckily when I went home, my dad would say to me “that’s bullshit, don’t mind that stuff”. It’s a very odd thing to do to a child. I wouldn’t do that to a child, tell them something mad like that.

C: So you’re angry about being told you had a dirty soul.

B: I’m very angry about that. Still to this day I struggle with issues of guilt and shame I know I picked up from that early age. Knowing what I know about psychology, I know I shouldn’t be that way.

What’s the most expensive thing you own (besides a house or car)?

B: Went into a field of nettles wearing shorts

C: Trimming a very large cactus with a meat cleaver and accidentally slicing open my palm.

Name two things you and the other person appear to have in common?

B: We’re both liberal Marxist cucks.

C: We both have a way with words and a ready supply of shopping bags in the boot of our cars.

When did you last cry and why?

B: A year ago when my cat Charlie died

C: I cry a little all the time, usually because of very positive things like a beautiful example of human resilience or decency. It would have been in the last week, but it’s a pretty regular occurrence!

B: Free and proper access to mental health services to everyone who needs them

C: I’ll have to go for two. A legal framework for access to abortion that respects, protects and fulfils the human rights of women and girls, and constitutional protection of economic, social and cultural rights such as housing, health, education etc.

C: A vintage Harris Tweed jacket I found for €60 a few years ago.

B: Running out of money and not being able to live.

C: Work-life balance, not having enough time for everything.

What fault do you most tolerate in people?

B: When they speak over others, I always see it as the person being nervous.

C: People being very angry, in an incoherent kind of way. I generally see that as fear and want to understand what it is about.