‘Grief takes a huge amount out of you but it puts it back, slowly and sheepishly’

It didn’t cross my mind we’d be near that ward, or that it would be uncomfortable for Mam 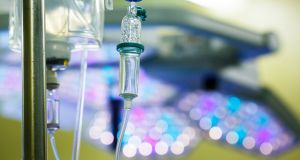 “You’re heading up to the third floor and it’s over beside Physio,” said the hospital receptionist through a sunny morning smile. I turned and headed for the lift and got there a few steps ahead of Mam, not thinking anything of her momentarily lagging behind. This was on Monday just gone and we were in the Mater for an appointment and I thought nothing of that, either.

We got out of the lift and rounded corners and walked corridors that we had known all too well back when Dad was on the chemo treadmill two, three, four years ago. I tramped on ahead, following the signs and arrows and, still, Not Getting It. In my maleness, I presumed the reason she was trailing so far behind me was that I was a master reader of hospital signs and she was not. The fact that she had been a nurse by profession was obviously no match for my mad skills of observation.

And then we turned the corner and found the department we were looking for. And then I saw what it was beside. Like, right beside – our row of seats against the wall indistinguishable from theirs. It was the Day Oncology Ward, where we had spent every Tuesday morning, on and off, for the last three years of his life.

We took our seats in a kind of stunned silence, hearing our breathing all of a sudden. There was a man of about 60ish sitting in the ante-room just off to the side, his legs crossed, his newspaper on his knee, his pen scratching at what looked from our distance to be his crossword. And we looked at him and we looked at each other and we breathed out again.

He didn’t look like Dad or anything. Nothing so dramatic. It was more just the prosaic familiarity of the scene hit us right between the eyes. Maybe Mr Crossword was waiting to be called for chemo, maybe he was waiting while Mrs Crossword was getting her line put in. Whatever their reality, it was once our reality. Making a brutal, unexpected reappearance.

Over lunch later on, I asked Mam when she had copped where we would be going. “When the girl said ‘the third floor’, I started getting a bit...” She left me to fill in my own blank on that one.

Not for the first time, I cursed my own blitheness in these situations. I knew we were going to the Mater but it didn’t cross my mind for a second that we’d be going anywhere near that ward. I wouldn’t have remembered what floor it was on if you’d given me three guesses and told me there were three floors.

Worst of all, it never occurred to me that just being in the building might have been an uncomfortable experience for Mam. I live on Dublin’s northside. Half the year, I work in Croke Park. I probably pass the Mater twice or three times a week.

For Mam, this was the first time she’d set foot anywhere near the place since the month after he died. The oncology ward puts on a Christmas mass each year and all the families who’ve passed in and out of it over the previous 12 months get an invite in the post. That was December 2015 and she’s barely been to Dublin half a dozen times since.

We were able to laugh about it, sort of, when we went into the city for lunch. The appointment had gone fine and it was nice to sit down by the Ha’penny Bridge and watch Dublin go about its Monday under a crisp autumn sky. We puffed our cheeks at the thought of the shock we got when we rounded the corner on the third floor and we heard him read out crossword clues in the silence between our mouthfuls of soup.

Grief takes a huge amount out of you but it puts it back, slowly and sheepishly as time passes. Next month is Dad’s second anniversary and I reckon if the incident on the third floor on Monday morning had happened even six months ago, we’d have been too shook to laugh about it over lunch.

As it was, we finished our soup and she headed for Henry Street. “For a bit of retail therapy,” she said. And I went back to work, proud of her.

24 hours in Bundoran: ‘The town is mental. No one expected it to be so busy’
3

Róisín Ingle: I’m menstruating as I write this. And I’m mad as all bloody hell
5

‘After 10 years of marriage, I’ve only had two orgasms during sex’
7

Hunting for an Irish holiday home? Here are nine with staycation appeal
9