The witches of Irish history had one thing in common: they were women who refused to conform 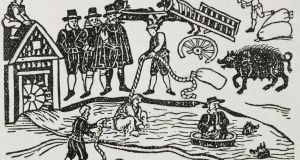 Water test used at part of witchcraft trials in the 17th century. Illustration from Ludicium aquae (trial by water), 1613 edition

Society has always feared powerful women. Witches have been a feature of folklore right across the globe, from the troll-whisperers of Scandinavia, to Italy’s witch-prostitutes, to the tsukimono-suji – or fox-witch families – of Japan. Whatever form they take, they have one thing in common: they are women who stood apart, whose refusal to conform made them objects of fear, derision, respect and, too often, violence.

Ireland’s reputed witches include a four-times-married moneylender; a much-loved healer; a successful seamstress seen as a bit too high and mighty; and eight women from Islandmagee, who were accused of bewitching a young newcomer, in a trial that came to be known as Ireland’s Salem.

Dame Alice Kyteler, the striking only daughter of a Flemish family of merchants who settled in Kilkenny in the 13th century, grew up to be a successful, well-connected innkeeper and moneylender – and the first person to be condemned for witchcraft in Ireland.

Kyteler had the bad sense to outlive not one, but four husbands – bankers William Outlawe and Adam le Blund, landlord Richard de Valle and Sir John le Poer – and to accumulate a vast fortune in the process.

In 1302, she and le Blund were briefly accused of killing Outlawe, who was 20 years older than her, but Kyteler’s power locally meant she was able to shake the accusations off. By the time her fourth husband, le Poer, fell ill suddenly in 1324, the rumours that she was involved in Satanic rituals were rife. After his death, his children and those of her previous three husbands collectively accused her of sorcery.

The Bishop of Ossory, Richard de Ledrede, seized on the accusations, and the witch-hunt of Alice Kyteler unfolded as a struggle of religion, politics, power and greed.

Kyteler once again called in her powerful connections, and had Ledrede jailed and questioned for 17 days, after which he wrote to the Chancellor of Ireland, Roger Utlagh – possibly Kyteler’s brother-in-law – demanding her arrest. The chancellor delayed the proceedings, allowing Kyteler to flee to England or Flanders, where she disappeared permanently from public view.

Several of her associates were arrested and one, Petronilla de Midia (see below), confessed to acts of witchcraft conducted, she said, on behalf of her employer.

The exotic list of charges brought against de Midia and Alice Kyteler, in a trial that transfixed Europe, included making a brew of the intestines and internal organs of cockerels, worms and hairs taken from the buttocks of a dead boy, mixed up inside the decapitated skull of a robber. According to an account of the trial by Ledrede, de Midia claimed both women could fly. She confessed, was flogged “through six parishes” and burnt at the stake in Kilkenny on November 3rd, 1324 – the first person to be burnt for heresy, as witchcraft was not yet on the statute books.

Florence “Goody” Newton was a beggar whose crime was to call to the house of John Pyne, a Youghal nobleman, during Christmas 1660 to ask for a piece of beef out of the powdering tub.

Mary Longdon, his maid, refused her. “Thou hads’t as good given it me,” Newton replied, words that were later taken to be a curse. When they met at the well a week later, Newton gave her a kiss and asked if they could be friends.

Longdon promptly became ill with fits and trances so violent “that three or four men could not hold her”. Witness accounts at the trial in September 1661 recounted how she began vomiting needles, pins, wool and straw, and how her fits got worse when Florence Newton was brought to her.

Newton was also accused of causing the death of her prison guard, David Jones, after she kissed his hand though the bars of a prison gate. He developed shooting pains in his arm and died, his widow claimed, screaming Newton’s name. A febrile madness seems to have taken hold of the community, with many of the town’s notables turning up in court to claim they had seen Longdon float to the ceiling or rain stones from her body. While incarcerated, Newton was subjected to a series of brutal tests of witchcraft, including having awls rammed into her hands.

The ultimate fate of Florence Newton is not known as the court papers were subsequently lost. If found guilty, she would have been sentenced to death.

The Witches of Islandmagee

In March 1711, eight women were found guilty at a trial in Carrickfergus, Co Antrim of the crime of witchcraft, and the demonic possession of a young girl.

The case, Ireland’s Salem, was set against the backdrop of the superstitions of the Scots-Presbyterian settlers, who made up most of the tiny peninsula. Witch-hunting in Scotland was at its height at the time, with 3,800 people prosecuted.

The story begins in 1710, when young Mary Dunbar arrived on the peninsula from Belfast. Mary began exhibiting the signs of possession that had afflicted Mary Longdon: fitting, vomiting nails, throwing Bibles. She claimed to have seen eight women from the community appear before her during her convulsions – and this alone, in the feverishly puritanical community, was enough.

Inevitably, the accused women were each outcasts in their own way: they were visually unappealing, drinkers, smokers and with various disabilities. On March 31st, 1711, the eight women were found guilty of bewitching Mary Dunbar – but the precise nature of the sentences and the punishments was not recorded.

For more on the Islandmagee Witches, read Possessed by the Devil, by Andrew Sneddon.

Bridget Ellen Connors was born in 1798 outside Ennis in Co Clare, reputedly inheriting healing magic from her mother, Ellen Early. Biddy’s parents died young and she spent time in the poorhouse, until she caught the attentions of the man who was to become her first husband (the first of four, all of whom she outlived), Pat Malley of Feakle.

Her reputation as a herbalist, healer or white witch spread after she moved to Feakle, and Daniel O’Connell was among her clients. Her fame was not based on her healing ability alone: she was in frequent conflict with the Catholic Church, the medical profession, landlords, the police and the judiciary, which made her something of a folk hero. When she died in 1874, predeceased by her last husband who had been in his 30s, 27 priests reputedly attended her funeral.

In 1895, 26-year-old Bridget Cleary – a beautiful, independent-minded woman – disappeared from her home in Ballyvadlea, near Clonmel in Co Tipperary. It was claimed the fairies had taken her, but when her charred remains were discovered, her husband, father, aunt and four cousins were arrested and charged with her murder.

The truth that emerged subsequently was a toxic mix of fairy folklore, illness, superstition, social mores and the ever-present suspicion of women with a mind and means of their own.

Cleary was a self-employed dressmaker, one of the first women in the town to own a Singer sewing machine. She enjoyed lots of male attention, and a reputation as a bit high and mighty. There were rumours of an affair with a married Protestant, but to the surprise of many, she married Michael Cleary, a sullen man 10 years older than herself.

When she was struck down with what might have been pneumonia in March 1895, her husband and family were so shocked by her changed appearance, they convinced themselves she had been taken away and swapped for a “changeling”. In the course of trying to determine if the sickly Bridget in his bed was really his robust, strong-willed wife, Michael Cleary exploded into a rage – and held her over the fire until she burnt to death.

For more on Bridget Cleary, read A Bewitched Land: Witches and Warlocks of Ireland by Robert Curran or The Burning of Bridget Cleary by Angela Bourke.