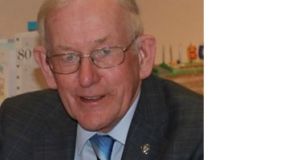 Brendan Devlin: to the forefront in encouraging and promoting innovation in environmental matters

A native of Coachford, Brendan lived at Newberry, Mallow, for the past four decades. He is survived and sadly missed by his widow Vera, children Gerard, Anne, Kieran, Carl, Vincent and Finola, siblings John and Felicity, daughters-in-law, sons-in-law, grandchildren, former colleagues and friends.

Born on February 25th, 1935, Brendan graduated as a bachelor of civil engineering from UCC in 1956. His early professional career included overseeing construction of the access road to the Mullaghanish transmitter and on the N8 near Fermoy in 1961 and 1962. He then worked with Kilkenny, Mayo and Donegal County Councils, prior to moving back to Cork, as deputy county engineer, for the Northern Division, in 1978. In this role he was responsible for all of the council’s engineering, planning, design and infrastructural works, over an area equivalent to Co Limerick.

On taking up his post, he was given specific responsibility for the improvement of the Cork- Mallow Road. The fact that there were over 100 bends on the existing road was indicative of the difficult terrain over which any new route would traverse. There had been strong opposition from landowners and business interests to previous improvement proposals by Cork County Council.

Brendan gave a huge personal commitment to the task over almost two decades, supported by a dedicated project team based at the council offices in Mallow. His technical ability, vision, interpersonal skills and innovative methods were key factors leading to the opening of the first three kilometres of the new road, south of Mallow, by May 1981, continuing through to the completion of the entire 33km to Commons Road in Cork city, in October 1994.

The project was sympathetic to the natural landscape traversed, with extensive tree planting and landscaping, as well as developing a wildlife habitat and walks on lands where soil, excavated from the project, had been deposited, in the Fens near Blarney. These were unique innovations at the time. He also leveraged the 1 per cent arts grant to commission various pieces of sculpture along the route.

Brendan was to the forefront in encouraging and promoting innovation in environmental matters and what we today would call sustainable best practice. He supported the establishment of the first energy agency in Ireland, by Cork County Council in Mallow. This led to many EU-funded research and development projects, which are now being implemented 30 years later.

His work embodied the dictum that engineering serves in providing infrastructure for the public to better go about its daily business. He was by nature an innovator. He imported into Co Donegal, from Northern Ireland, the first snowplough used outside Leinster local authorities. Based on his Donegal experience with wet-mix macadam as a road base material, he pioneered its first use in the southern counties when he came to north Cork.

Under his guidance, Cork County Council was the first local authority to compile a waste management plan, which formed the blueprint for others later.

He constructed the first engineered landfill and facilitated the development of vast groundwater resources in north Cork.

In May 1993, Brendan was appointed county engineer, based at County Hall, and continued in this post until he retired in 2000. He supervised the management of the engineering function of the entire county, including major road projects on the N22, N25, N28 and N71, the Midleton sewerage scheme and the county sludge management plan.

He was a valued adviser to the county manager and the council members and co-operated with Cork Corporation in many joint ventures.

Brendan’s leadership style was based on teamwork. He was a trusted and sincere colleague and mentor to his staff, and was always available to advise and support them. He took great pride in the fact that many of them went on to be promoted to senior positions in local authorities.

Following his retirement, he shared his expertise and experience generously with both the public and private sectors. He maintained an ongoing interest in new technology, particularly the complexities of renewable energy.

On his retirement, he expanded his interests in gardening, golf and bridge. He was totally dedicated to his wife and family and was always available to give the benefits of his wisdom and experience.

He was laid to rest on a beautiful sunny day in St Gobnait’s Cemetery, Mallow, on July 11th, 2020, just a few hundred metres from his lasting legacy, the Cork Mallow Road N20.