My mum’s ashes have been in the urn for nine months. ‘She’s bored. She wants to move on’

Hilary Fannin: I had thought we should scatter them over the cosmetics counter in our local chemist 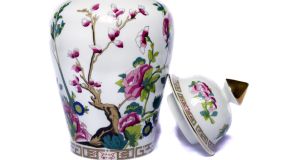 “I think we’ll probably plant Marie’s ashes in a couple of big flowerpots with some rose shrubs.”

It’s been nine months since my mother died, and we’re preparing to unseal the bronzed plastic urn that sits on a shelf in my sister’s house, facing the sea, and disperse her ashes.

“She’s bored,” my sister told me flatly. “She wants to move on.”

Who am I to argue?

Nine months of bereavement is a strange kind of gestation. I’ve been keeping myself pretty busy along the way, however.

I went to university. I began writing a book. I shopped and cooked and cleaned, and put diesel in the car and slop in the cat. I watched reality schlock on television. I went to plays. I crawled around looking for matching socks. I wrote columns. I thought about vegetarianism. I downloaded Spotify, borrowed some earbuds and went for a walk. I decided to eat more fish. I decided to use a keep cup.

I decided to get out more. And so I did. A couple of weeks ago I even drove all the way to Longford, and back, to see the final performance of a heartbreakingly brilliant modern dance piece called Swan Lake.

At the end of choreographer and theatre-maker Michael Keegan-Dolan’s exhilarating and moving production, the dancers emptied sacks of feathers over the stage and wafted them into the audience. And there I was, on a cold spring midlands night, bedazzled and elated. You kind of needed to have been there, but, sitting in the dark in the packed, enthralled auditorium, I felt like I was watching souls falling, or hope drifting, and I was in bits. I could hardly navigate my way out of my seat and back to the chilly car for the dark journey home.

I’ve been thinking about those floating feathers on and off ever since. Maybe they’re a useful metaphor for the sense of fragility people can experience after bereavement.

Personally, I now find myself constantly anticipating endings, as if I’m in some predetermined process of wrapping things up, of sealing off a future in which only the recurrence of loss is inevitable. This is one of the consequences, I suppose, of finding oneself on the front line.

A friend who was bereaved a couple of years ago told me that this portentous sense of everything turning to dust eventually passes.

“When you stop seeing everything as an ending,” she replied.

Then, the other night, I accidentally broke a glass on the kitchen tiles and I sat there for a long time looking at the shards, brooding again on what was irrevocably shattered and impossible to resurrect, before I finally stood up and got a grip on myself and found the dustpan and brush.

Wrapping the broken glass in an old newspaper (harder, in these online days, to locate), I felt that something had, after all, begun to shift. There was a recognition, maybe, of the freedom to make fresh choices, an understanding that you don’t get a gold star for being a good griever, or a medal for moving on, and that there is no klaxon to tell you when you’ve crossed grief’s finish line.

There is no finish line. There’s just life, until there isn’t.

I think we’ll probably plant Marie’s ashes in a couple of big flowerpots with some rose shrubs. (I had thought we should scatter them over the cosmetics counter in our local chemist, which was her destination of choice for most of our outings, but that might distress the other customers.)

My father’s ashes went into the sea at the back of the Baily Lighthouse, where they sank into the dark-grey waves that crash around that rocky outcrop. It is the place he would have chosen to go.

Anyway, in case all this talk of bereavement is getting you down, I’ll leave you with a snippet from medium Laura Lynne Jackson, one of the guests at Gwyneth Paltrow’s second “In Goop Health” summit, held earlier this year in Manhattan. Jackson, having encouraged people to look for their “spirit guides” in birds and butterflies, sought to reassure her audience that death is little more than a bad idea, claiming: “Death doesn’t exist! We fear death all our lives, right? And then we cross and we’re like ‘oh my god, I wasted all that energy being afraid of death – there is no death’.”

Could you imagine, for one second, getting to the end of your life and reaching some level of acceptance of your mortality, only to slip away and open your eyes again to see some shagging Californian offering you a spinach smoothie?

Man, I’d take the pain of loss any day.

Make a move to Rialto: Dublin 8, but without the wave of gentrification
5