New to the Parish: Alex Dalkin originally arrived from Australia in 2016 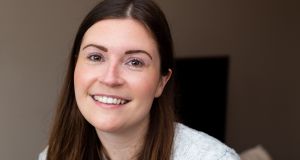 Alex Dalkin and her Irish boyfriend John arrived into Dublin airport in January with a large folder tucked neatly in their bag. As they approached the immigration desk, the Australian pulled out the large wad of pages she had carefully packed in preparation for the conversation she was about to have. Despite spending two years reading about Irish visa requirements Dalkin still felt nervous.

She explained to the officer they were returning to Ireland after living together in London and had gathered the paperwork needed for the de facto partnership immigration visa. Dalkin added that she would need temporary permission to remain in Ireland while the couple made the application but added that the 90-day tourist visa would not cover the six-month waiting period for a decision on the visa.

Unable to answer all the couple’s questions, the official called her supervisor.

'The Irish stereotype is not at all what you experience in north inner city Dublin, it’s a different world'

“He literally glanced at our paperwork and said ‘you’re not going to get this visa’. He said we’d be better of going down the route of European treaty rights. He spoke directly at John even though he was holding my passport. He didn’t even look at my application form. I couldn’t ask a question, he just put his hand up to me and said ‘I’ve been doing this for years’.

“When we got through immigration I was nearly crying. As much as he’s an immigration officer, you can’t judge someone’s personal situation by glancing at a folder at desk in Dublin airport. It doesn’t work that way.”

Dalkin first came to Ireland in 2016 where she joined her twin sister Meg who had already spent a year living in Scotland. Having grown up in the small town of Mount Beauty in northeastern Victoria and lived on Queensland’s Gold Coast, life in Dublin’s north inner city, where the sisters lived, was initially a shock.

“I worked in Tesco on Parnell Street for a while. The Irish stereotype is not at all what you experience in north inner city Dublin, it’s a different world. We were living on Blessington Street and it was a real eye-opener. I was really shocked at the homelessness and drug use, it was so different to anything else I’d experienced.”

Dalkin planned to spend a few months working and saving money before travelling around Europe. However, shortly after arriving in Ireland she met an Irish man she had connected with through Tinder back in Australia.

“It’s a really bizarre story. John had done his two-year working holiday in Australia and we matched on Tinder but never met up. He was going back to Ireland and I told him my plan was eventually to come over. So he said when you arrive I’ll be your guide.”

The couple began dating but Dalkin was determined to stick with her travel plans and embarked on a three-month backpacking trip. When she returned to Dublin the pair picked up where they had left off. In the meantime, her sister Meg had also met an Irish man. “While I was in Europe my sister got engaged to Garvin. I’d met him once or twice before I left and it was really serious for them from the get-go. My sister had used her UK visa and Garv had used his Australian visa but she knew she wanted to stay and be with him.”

Dalkin watched from the sidelines as her sister went through the rigorous interview process with immigration authorities to have the marriage approved. She also began reflecting on her own relationship and how it could overcome visa restrictions in the long term. “I understood that’s what they had to go through to be together but it was too close to home for me. I kept thinking ‘is this going to happen to me?’. The whole time I was thinking I’d have to do the same thing. But then I spoke to mum and she was like ‘Alex, it’s not you. You’re different people’.”

In January 2017 Meg and Garvin were married and the following month Dalkin and John moved to London.

“It was a difficult decision that really stressed me out because you’re kind of forced to make a decision as a couple in a really short amount of time. We were planning crazily ahead and I was looking at immigration policies and thinking we need two years of proof of cohabitation so we could come back to Ireland. Either that or try and move to Australia and that’s not a perfect process either. I was definitely sure of my relationship but I don’t really believe in marriage, it’s not something I’d rush into.”

'I feel like I’m living two lives that are divided but at the same time I’m grateful I can have too homes... This is my home and Australia is my home as well'

The couple spent two years living in London and returned to Ireland in early 2019. They moved in with John’s parents in Leixlip and he returned to his old job. However, Dalkin was unable to work while waiting for a decision on her visa application. “In Ireland, to apply for a defacto partnership visa is free, but when you’ve got 6-12 months of wait time there’s all these hidden costs. If you look at it in terms of loss of income it’s much more than the $7,000 for an Aussie visa.

“If John didn’t have family in a position to help I don’t know what we’d do and how we could live on a single income. Dublin rent is on par with London, it’s just so unbelievably expensive.”

Before arriving back in Ireland the couple spent months collating 250 pages made up of letters, photos, Facebook and Instagram screenshots and copies of emails to submit as part of their request for Dalkin’s partnership visa. “You could say it feels invasive but collecting all this information also felt nostalgic. You look back and remember what happened together. I had a photo of John the first time we went away together to Galway and that was one of the first things that went in the folder.”

After nearly five months of waiting, Dalkin is hopeful her visa will come through next month. She’d like to find work in the not-for-profit sector as she previously worked with the Red Cross in Australia. The couple also hope to visit Dalkin’s family in Australia later this year, including her sister and her husband who left Ireland last year.

“I feel like I’m living two lives that are divided but at the same time I’m grateful I can have too homes. I’m optimistic about the future. Even though nothing’s perfect, you can still feel settled. This is my home and Australia is my home as well.”

Tanya Sweeney: Memories – good and bad – go wherever we do
6