Life of a stuntwoman: ‘When I had the baby, I knew it was the end of me jumping off things’

Despite being set on fire and buried, Co Wicklow woman Eimear O’Grady says she is not a thrillseeker 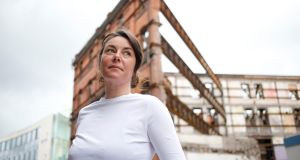 Eimear O’Grady’s first foray into stunt work was as a student, when she was asked to jump off a crane. Photograph: Nick Bradshaw/The Irish Times

As a stuntwoman, no two days at the office are the same for Eimear O’Grady. On any given film shoot, she could be tasked with jumping from a great height, sword fighting, or quite literally setting herself on fire. When shooting Irish horror film The Hole in the Ground, she had her head buried in the ground.

“We had a box with a scuba tank, I put my head inside, and then they buried my head in the ground basically,” she explains, demonstrating how she got down on both knees and kept her body outside the ground. A sort of claustrophobic version of the yogic child’s pose.

Given her line of work, you would be forgiven for thinking she’s some sort of thrillseeker or adrenaline junkie. Not so, says O’Grady.

“I don’t really get that,” she says, dispelling any notions that she’s a modern-day Evel Knievel. “I like not losing the head. It’s all about control in a way. It’s about the challenge and how you make something without it becoming uncontrolled or risky.”

Since landing her first stunt-double gig back in 2007, O’Grady has ascended the ranks to become one of the most in-demand stunt performers and co-ordinators in the country.

She has worked on high-profile Irish and international productions, including Vikings, The Tudors, Penny Dreadful and Murder Mystery, a big-budget comedy starring Adam Sandler and Jennifer Aniston.

How exactly did she find herself in this position?

Originally from Co Wicklow, O’Grady was a competitive swimmer and springboard diver as a child. “That was the start of it,” she says, drawing parallels between her childhood pastime and career as an adult. She also played the cello and pursued music after school, earning a BA in music performance from the Royal Irish Academy of Music.

Afterwards, she enrolled in the Gaiety School of Acting. While there, a teacher got her a job as a stunt performer. “They were like, ‘We need a girl to jump off a crane onto boxes, are you up for it?’” she recalls. “I was like, ‘Absolutely. I would love that’.”

She quickly fell in love with performing stunts. At the time, however, there wasn’t enough work to sustain a career and she returned to the cello. She joined a band called One Day International and wound up touring with them, performing at SXSW (South by South West) in Austin, Texas, and supporting Elbow in Vicar Street. The group released an acclaimed album in 2008 and went their separate ways shortly after. “I guess we were probably the wrong music at the wrong time,” she says.

It was through playing the cello that she met her husband, the singer-songwriter Declan O’Rourke. The couple married in 2015 and now live in Kinvara, Co Galway.

Even while she was working in music, O’Grady continued to cobble together bits of stunt work here and there, building up experience and skills along the way.

Her breakthrough came when she was hired as a stunt double for Eva Green in the Showtime series Penny Dreadful. “That was the turning point where I just went, ‘This could be a proper career’,” she says.

During one of her final days on set, O'Grady ended up going into labour six weeks early. With no close family nearby she ended up driving herself to hospital

A proper career, indeed. She has since amassed dozens of credits across film and television.

What does it take to be a successful stuntwoman? Good spidey senses, says O’Grady. “It takes an awareness of everything – yourself, other people, the camera, the set. Awareness is number one.”

Last year, she worked on the series Nightflyers in Limerick’s Troy Studios while pregnant with her first child. “I worked as a wrangler so I wasn’t jumping off anything,” she says, reassuringly.

During one of her final days on set, she ended up going into labour six weeks early. With no close family nearby – her husband was performing in Scotland at the time – she ended up driving herself to University Hospital Limerick where she gave birth to a healthy baby boy. “It’s a mad story, but it worked out really well,” she laughs.

Becoming a mother has forced O’Grady to shift gears. “When I had the baby, I was grieving in a way because I knew that it was the end of me jumping off things,” she says. “It was sad, really sad, because I really loved it.”

“It changes your perspective on things when you have a child. I have to come home to him and be able to look after him. That’s my responsibility now. I never questioned it before.”

These days, she works primarily as a stunt co-ordinator, which means she works closely with the director to choreograph stunts and ensure they go off without a hitch. “As a co-ordinator you have to try envisage all the things that could possibly go wrong and talk about them and address them to the best of your ability,” she explains.

'There hasn’t been a female co-ordinator here before so that’s new for people ... I would just hope that you can be valued for what you do as much as who you are'

Over the last twelve months, she has worked as a stunt co-ordinator on two starry movies. Last summer, she was hired to work on Murder Mystery, a forthcoming Netflix comedy. Shot on location in Italy, she worked alongside Adam Sandler and Jennifer Aniston. “They were so lovely and so professional,” she gushes. “I have no salacious stories, I am afraid.”

In April, she worked on Downhill, an English-language remake of the Swedish black comedy Force Majeure. The film stars comedy heavyweights Will Ferrell and Julia Louis-Dreyfus, and was filmed in Austria. “That was amazing,” she says. “I had to topple a table in front of Will Ferrell.”

Other projects in the pipeline include the highly anticipated second series of The Young Offenders; a new six-part mystery period drama titled Dead Still; and the second series of Virgin Media One’s psychological crime thriller Blood. That’s not to mention film projects like Gretel and Hansel, Herself, and Green Knight.

O’Grady says that her success in a traditionally male-dominated field is emblematic of a sea change in the film industry.

“There hasn’t been a female co-ordinator here before so that’s new for people,” she says. “There’s a big move towards women being behind the camera… which is great.

“I would just hope that you can be valued for what you do as much as who you are.”