Conor Pope: For all its brilliance, my phone makes it impossible for me to switch off 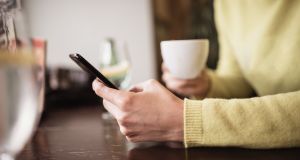 “Sometimes it’s for productive purposes ... but more often it’s for no other reason than it is there.”

O’Connor asked if that meant she was a workaholic and she denied it saying she only works long and late because she enjoys what she does and because it is part of who she is and because she doesn’t consider work a chore.

I tell myself that a lot.

Later that night – and by complete chance – the adults in the Pope house watched Like Father, a recently released and mostly harmless Netflix film staring Kristen Bell and Kelsey Grammer. We watched it not because of any positive newspaper reviews or a Microwave Recommendations from Irish Times newsroom space which passes for a kitchen, but because of the two lead actors. Frasier is one of my all-time favourite television programmes and The Good Place is, well, grand.

The film starts with Bell, in her wedding dress, talking to a key client on her phone seconds before she walks down the aisle. At the risk of spoiling the opening 90 seconds of the movie, she then hides the phone in her bouquet and its surprise re-appearance at the altar sees the wedding abandoned.

I think viewers are supposed to consider Bell is some class of crazy workaholic and ask themselves who would take a work phone call right before their wedding and then try to hide their phone in a bouquet? I found myself thinking, “At least I’d probably have a suit jacket to hide it in.” I suspected my better half was thinking “I’d have kept a much tighter grip on the bouquet.” She more than confirmed my suspicions seconds later when she said: “She should have worn a wedding dress with pockets – they’re very on-trend.” You see when it comes to our phones and our jobs, there’s a pair of us in it.

I can’t remember the last time I went more than eight hours without checking my work emails. Actually that’s not true. I can, but only just. It was 10 years ago, on the day before I took delivery of a Nokia E61, an email-friendly phone bought on eBay in a late-night, wine-induced shopping spree.

I loved that phone and its dinky qwerty keyboard but I had no idea, as I took it out of the box, how much it – and the endless stream of increasingly smart devices that came in its wake – would change my world. And not always for the best, despite what I tell myself when I hear Norah Casey denying she is a workaholic on the radio.

My phone today is a lot smarter than my lovely Nokia. It allows me read and send emails day and night, write articles – like this one, tweet insults directly at the US president, watch YouTube clips of grooms falling hilariously on to wedding cakes, read newspapers, take high-definition pictures before tweaking them with special filters, listen to and buy music and books, book flights, watch England win penalty shoot outs in World Cups live, file tax returns, play Scrabble with strangers and hundreds of other things. And all while sitting on the 37 bus stalled in traffic on the north quays.

But for all its brilliance, my phone makes it impossible for me to switch off or stop working. More than five years ago, I read a book by US journalist Daniel Sieberg called the Digital Diet – well, I skimmed it, my attention span is shot. He documents his own battle with tech addiction and says he realised he had a problem when swimming with sharks. He had an urge to use his BlackBerry (when that was still a thing) underwater “while a fearsome predator stared me down”. It forced him to ask himself “what the hell was wrong with me?”

“Nothing,” I thought at the time. “That would make a great Instagram pic.” I still kind of think that. But after reading/skimming his book I went on a digital detox. I lasted six hours.

In the years since then, I’ve become worse and now I reach for my phone more than 200 times a day. Sometimes it’s for productive purposes, like sending latenight work-related emails, insulting the US president on Twitter or writing columns such as this in the very early morning – but more often it’s for no other reason than it is there.

“Life moves pretty fast. If you don’t stop and look around once in a while, you could miss it,” said a teenage Ferris Bueller in the film which marked his day off. Ferris is now 50, his day off was – an absolutely terrifying – 32 years ago and the speed at which life moves has accelerated dramatically. And by constantly reaching for my phone I know I’m missing too much of it