‘I’m asleep, and she turns up, a bit drunk. We both knew where it was going’

I’m listening to two young men doing what we think they are incapable of: having a meaningful conversation about consent 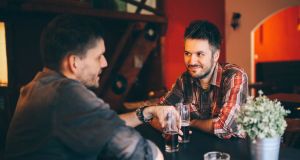 ‘I’m pretty sure she was up for it. But I didn’t want to do anything.’ Photograph: iStock

His friend grunts as if to suggest he might know, but he’s not sure where this is going. Neither am I. But it’s safe to say we’re both fully invested. I’m eating alone in a restaurant in the middle of England, reading a book on Brexit. Every conversation I’ve had for the past four days has been about Brexit. By comparison, this is practically David Mamet.

“It’s like those people who touch food in a sexual way, for kicks. Sitophilia, I think it’s called. You must have seen it. It’s all over YouTube. You know, women in latex dresses touching melons. I don’t think it’s sexy,” the young man with neat haircut adds, hurriedly.

“But anyway, that’s what Nigella reminds me of, which is why I can’t watch her with my mum.”

“That would be weird,” the other guy, who looks like a younger Howard Stern, agrees. He orders another beer. I’m about to get back to my book when Neat Hair says he hasn’t been feeling that great in himself lately. He was in a bad place, he says, and he realised he needed to get outside his own head. So he planned a trip to Ireland. He’s quite excited about that. “It’s good you did that,” Howard says.

“Yeah, otherwise I’d have called her,” Neat Hair says. “I have these moments when I feel down, when I feel a bit alone, but I think about how I felt before we broke up, and I felt alone then too. This is hard, but it’s still better.”

Howard says, awkwardly but earnestly, that if he ever needs someone to talk to, he’s there. “Thanks,” says Neat Hair. “That’s really kind. So, yeah, she came over a few nights ago.”

Howard digests this. “She just turned up,” Neat Hair says. “It’s midnight, and I’m asleep, and she’s a bit drunk.” They both knew where it was going, he says. “I’m pretty sure she was up for it.”

“But I didn’t want to do anything,” he goes on. He did, in a way. “Obviously. But to be honest, she was in no fit state. If we had, I think she would have regretted it. I knew I wasn’t going to restart the relationship, so she might not have felt great about it afterwards.” She slept on the couch, he shrugs.

As they talk, I’m thinking about an article I read on the plane on the way over in this newspaper. It was a transcription of a discussion about consent between moderators Richie Sadlier and Elaine Byrnes and a group of transition-year students. The conversation, like so much of the public discussion on this topic, seemed to suggest that some young men seem to see “consent” as a trap invented by women to catch them out. One student decided that “the law is bulls**t. Why are men the ones who have to take responsibility for the woman’s drunkenness?”

Another was indignant that “you’re kind of saying we should take responsibility for the girl’s drinking too”.

It was all a bit depressing. And yet, just a few days later, here I am listening to two young men doing what we keep hearing many of them are incapable of doing. They’re having a meaningful conversation about consent, and how, in a darkened room when there’s alcohol involved, and nobody around to spell it out for you, it’s still possible to figure out where the boundaries lie. You don’t need an app, or a legal definition. You just need a bit of respect – for yourself, and for your prospective partner.

I look over to see if they realise what they’re doing, these children of the #MeToo generation, drinking their beers, eating their noodles and casually tackling this thorniest of questions about mental health and consent head on. But the conversation has progressed.

“All he does on weekend is play golf, and drive his kids to sport, and smoke meat in his 800lb meat smoker. Then he comes in and spends the rest of the week talking about it. Golf, his kids, and his meat smoker,” Neat Hair is saying.

“I don’t know. He says it tastes good. He goes on like it’s so healthy, but smoked meat? It’s got to be full of carcinogens.”

“Yeah. What does he smoke in it anyway?”

“That does sound pretty good though.”

“Yeah. He seems really happy about it. It’s like that’s all he needs in his life. It’s sort of sweet,” Neat Hair conceded with the faintly patronising air of a man in his 20s who’s never going to become someone’s boring, happy, middle-aged, meat-smoking, golf-playing colleague. I want to tell him that it comes for us all, in the end, but I don’t want to wreck the mood. So I just go back to my book on Brexit.