‘So if you go out and both get drunk you can’t have sex? That’s f**ked up’ 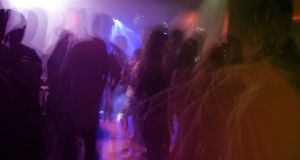 Party of two: if your partner is heavily intoxicated they can’t give consent. Photograph: iStock

Richie: Does anyone in the class have any idea how they might explain consent to someone?

Joey: Just tell them that no means no.

Elaine: Okay, but remember the absence of a no doesn’t mean the presence of a yes. Silence isn’t consent.

Johnny: But if someone isn’t giving any indication they’re not consenting, how are we meant to know?

Shane: You’d see it on their face.

Johnny: Yeah but let’s say the room is dark?

Shane: You’d know by their body language. They’d be frozen stiff or something. Ah, you’d know.

Paulo: Yeah but they could just be really rigid and shy, or quiet. What’s the difference?

Johnny: Yeah but how are we meant to be sure?

Harry: You could ask them straight out if they’re up for it.

Elaine: Yes! And don’t be afraid to be really specific. Communication is everything when it comes to consent.

Gareth: Okay, what are you meant to say? “Am I raping you or not?” [Room laughs]

Richie: Well that might kill the mood a little. Maybe think of other ways to phrase it, but checking to make sure they’re comfortable and enjoying themselves is not a bad thing.

Johnny: Yeah but I heard that if the girl is drunk and even if she says that she’s enjoying it at the time, it’s still rape. Is that true?

Richie: Well the legal definition of rape is penetrating someone without consent. A person incapacitated through drink or drugs would be considered too wasted to give consent. So yes, if she’s drunk, you’re vulnerable in the eyes of the law.

Johnny: That’s f**ked up! So if you go out and you both get drunk you can’t have sex? Isn’t that, like, 90 per cent of how people have sex in Ireland? Get drunk first and then shag?

Neil: Yeah, sure everyone drinks.

Gareth: Yeah, but we’re not trying to have sex with you. [Room laughs]

Richie: Nobody is saying you can’t have sex. The law says if your partner is heavily intoxicated, though, they can’t give consent. That’s the definition that matters in the courts. And this isn’t just about penetrative sex. We’re talking about all sexual behaviours.

Johnny: Yeah but what’s the difference between normal levels of drunkenness and being too drunk? How can you tell?

Elaine: Anyone? Where exactly is the line?

Joey: Well if she can’t remember anything that happened, she’s obviously too drunk.

Paulo: Yeah but you won’t know that til the next morning. How are you supposed to know there and then?

Richie: Anyone? Where exactly is the line between normal drunk and way too drunk?

Joey: If she’s slurring her words, she’s obviously too drunk.

Thomas: Everyone slurs their words when they’re drunk. You’d never have sex if that’s where the bar is.

Joey: I’d say if she’s falling around, or her balance is all over the shop, then she’s too drunk.

Thomas: That happens to everyone, too.

Luke: Yeah but what if you’re the same amount of drunk – how are you meant to notice?

Luke: Well you’re saying all men should know when a woman is too drunk to have sex . . .

Richie: Actually, we never said that. We just stated what the law says. We didn’t specify gender either.

Luke: Okay, fair enough, but you’re basically saying men should be the ones to stop everything if the girl is drunk, even if the girl is saying at the time that she wants it.

Elaine: That’s not what we said either.

Luke: Okay but what I’m saying is – if both people are the same amount of drunk – how are blokes expected to be all responsible and stop what they’re both doing? They’re out of their heads too, remember. It’s f**ked up that in those situations the bloke is the one who can be accused of rape. That’s what I’m saying.

Elaine: Anyone got anything to say to that?

Johnny: Luke’s right. The law is bulls**t. Why are men the ones who have to take responsibility for the woman’s drunkenness?

Bobby: That’s not what the law says. Listen to what they’re saying. It just says there’s a point where someone can be too out of it to give consent, so even if they say yes, you should still walk away.

Richie: It doesn’t say walk away. It’s making you aware that being intoxicated can influence a person’s body language and facial expressions, even their words. It’s up to you to know how to behave if you’re ever in that situation. And remember, the law only becomes a consideration if there’s an allegation. I don’t want you to get the impression that any woman that has sex while drunk – even if she can’t remember every detail – will automatically go to the gardaí. I’m just saying you should always take responsibility for your own actions in this area.

Gareth: Yeah but you’re kind of saying we should take responsibility for the girls drinking too, like we have to be the ones to make decisions on their behalf. I’m a feminist, you know. What about equality? [Room laughs]

Conor: It basically is, though. Let’s say we’re the same level of drunk, you’re saying the girl’s words – her saying yes – don’t count if she was hammered, but the bloke’s actions – penetrating her – does. Is that not bulls**t?

Richie: Don’t you think drunken people should be offered some protection by the law? There are loads of cases where really drunk people have been taken advantage of by people who knew that what they were doing was wrong at the time.

Conor: Yeah but they’re scumbags. We’re not. We’re just trying to get laid [room laughs]. You’re making out, okay, sorry – the law is making out – that there’s a higher standard of behaviour on us lads. That’s bulls**t.

Elaine: I suppose what we’re saying is how important respect is when it comes to consent. Respect for yourself and respect for others. So, just to keep that in mind – you being drunk or the other person being drunk doesn’t change that.

Leo: If a girl is hammered, though, shouldn’t the conversation be about why she’s hammered? You’re telling us to be responsible when it comes to alcohol and drugs, why shouldn’t women be held responsible too?

Richie: Lads, men can be raped too. This isn’t a man/woman thing. The law is there to protect everyone.

Conor: Okay, but I read about this bloke that was accused of rape and he didn’t do it and the girl just got away with making it up and now his life is ruined.

Leo: Yeah but why does everyone automatically believe the girl? You look on social media and everyone assumes the girl is right and the bloke’s reputation is ruined. Since #MeToo nobody believes blokes anymore.

Richie: That’s not a reflection of how the courts generally see it. Have you seen the conviction rates compared to the number of reported rapes? Anyone know roughly how many rapes go unreported?

Johnny: But a man’s life is ruined if he’s accused.

Richie: Let me ask you this way – if you came to me this morning and said you had been raped last night, would you want me to believe you? [Room laughs] No, seriously, let’s move away from the notion that women are the only victims of rape here.

Richie: Okay, and let’s say it happened while you were at a party with a load of older blokes and you were drunk. Would you want people to say it was your fault cos you were drunk? Or that you should have known better than go to a house with older lads or some s**t like that?

Leo: Obviously not, no.

Richie: So why did you say we should discuss the woman’s drinking if she was drunk?

Richie: Sorry lads, we’re out of time here. Anyone got anything to say before we finish up?

Elaine: So would it have been enough for us to just say to you all that no means no?

Elaine: And if we asked any of you to explain consent to someone now, what would you say?

Gareth: I’d tell them to never drink and stay a virgin cos it’s not worth the f**king hassle. [Room laughs]

Richie and Elaine: See you next week, lads.

Richie Sadlier and Elaine Byrnes deliver a six-week module in sexual health to transition year students in St Benildus College, Kilmacud. The names of the boys, listed above, have been changed.