The naked countess, the fish and the row about a Trappist ale poster 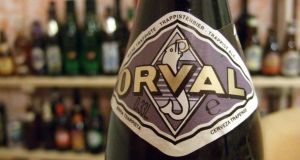 Orval: the Trappist ale features the legend of Countess Matilda on its label. Photograph: James Cridland/CC

Matilda of Canossa, countess of Tuscany, has been causing a bit of a fuss in the beer world. She’s the woman who, legend goes, accidentally dropped her wedding ring into water, said a little prayer, and then saw a magical trout appear with the ring in its mouth. As a sign of her gratitude she established a monastery on the site – which she proclaimed a Val d’Or, or Golden Valley – and that’s where the great Orval brewery, in Belgium, now lies. The ring-bearing trout appears on its labels.

Fast-forward to 2019, when a brewery in Austin, Texas, called Jester King announced its annual Orval Day festival with a poster of the countess and the fish. That she is naked on it became a bit of a talking point, prompting the artist who designed the poster, Katie Ross, to respond by saying she imagined the countess had been bathing when she dropped her ring, adding: “If you are familiar with my work, I love celebrating the beautiful form of women and people in general, in all their naked glory.”

While the tricky issue of women and beer branding will rage on, the Orval poster is a far cry from the blatantly sexist imagery used recently for Chesty La Rue, a new beer released by Fireforge; the brewery then removed the branding because, as it tweeted, “it offended many”.

As for Orval itself, it’s the strangest of the Trappist beers. Produced since 1931, it is fermented with a wild Brettanomyces yeast. It has a particularly distinctive funky, spicy flavour that changes over time, its earthy characteristic evolving, the beer becoming drier and the carbonation higher. Bottles sold here are usually two or three months old.

Irish breweries making Belgian-style beers include Rascals, with its Yankee White IPA, and Black Donkey, which does some great saisons. Mescan, in Westport, has a solid line-up of quality Belgian beers, and it is holding a one-day course on April 20th if you’re interested in learning more about the wonderful world of Belgian brewing.