Are We There Yet? The real Northern Ireland is the raucous, storied land of ‘Derry Girls’ Van Morrison, and the best, most friendly, greatest-craic people you can find 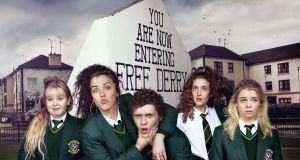 I love Northern Ireland. And because I’m very fond of the place I’ve been feeling a little annoyed on Northern Ireland’s behalf lately. In the not-too-distant past, the whole population was unfairly tarred with the same Troubles brush. The unfairness continues these days as Northern Ireland gets mentioned mostly in tedious Brexit dispatches, the whole place cast as a beleaguered backdrop of backstops and borders and potential sandwich shortages.

When many people think of Northern Ireland these days, they think – and not fondly, it has to be said – of Arlene Foster and the DUP. They think of Stormont, a building packed to the rafters with frustrated civil servants in search of a government. (In what is a world record, Northern Ireland has now gone 767 days without a government. But the politicians all still get paid and have cost the taxpayer over €9 million since Stormont was suspended. “It’s demoralising,” says my civil servant friend.)

And when people think of Northern Ireland they also think of certain British politicians Moggsplaining endlessly about the impact of Brexit on the actual real lives of those who live there.

But, as those in the know will tell you, all of that has nothing to do with the real Northern Ireland. The real Northern Ireland is the raucous place of Derry Girls and the warmth and wit of the late, great Gerry Anderson. It’s the storied land of Van Morrison and your first crunch of Yellowman honeycomb. It’s Rathlin Island and Portavogie Strand and the Carrick-a-Rede rope bridge which my kids bounce over like goats but which I can only cross very slowly, backwards and on hands and knees.

It’s a place like Belfast, both grand and gritty at the same time, where wandering around shops is a joy just because of the smiles and witty chats with staff who seem always to be falling over themselves to help you out. It’s playing pool in Lavery’s bar and later discovering a great new cocktail bar modelled after a speakeasy. It’s catching a show at the Black Box or the MAC and strolling on the cobbles in the Cathedral Quarter.

Some of the best, most friendly, greatest-craic people you will ever meet live there. It has some of the most dramatic coastlines on this island and some of the best tourist attractions. And, apart from all that, it’s a brilliant place for children, with the Belfast Giants ice hockey team, a W5 interactive science facility and – case closed – Game of Thrones.

So here’s what I think we should all do. We should forget Brexit, backstops and borders. We should take the children in our lives on a magical mystery daytrip or an action-packed overnight to Northern Ireland.

But what will we do when we get there, I hear some of you wonder. I’m so glad you asked because I’ve been doing a bit of research and (lambeg drum roll, please) here are some great things to do with kids in Northern Ireland over the next few weeks, Brexit or no Brexit . . .

Belfast Children’s Festival is an annual international festival for children aged from zero to 17 and their accompanying adults. Events take place both in and out of school time for schools, groups and families to attend. You can expect a packed programme of theatre, visual art, music, dance, literature, workshops and talks, guaranteed to inspire joy, creativity and curiosity over the six days, with several world, UK and Irish premieres. The festival is organised by Young at Art, one of Northern Ireland’s leading children’s arts not-for-profit companies and home of the Belfast Children’s Festival. A few highlights include:

Opening the festival at the festival hub, The MAC, on Friday 8 March, Oorlog by award-winning Theater Artemis from The Netherlands explores the challenging subject of the effects of conflict and the chaos that this has on people and their surroundings and, ultimately, how the human spirit endures. Ages 7 plus.

Removed is a funny yet moving and shocking insight into the experiences of a young man sharing his story of life in the care of the State, and will have its world premiere at the festival. For three years, Prime Cut Productions and writer Fionnuala Kennedy have collaborated with VOYPIC (Voice Of Young People In Care), working with looked-after young people across Northern Ireland to explore their experiences and learn from them. Ages 11 plus.

Ponten Pie and El Mes Petit de Tots from Spain make their Irish premiere with the visually stunning Loo. The Loo is a hot, dry wind from Asia and not the other kind of loo. Set around the bow of a sunken boat, in a sea of sand, this production uses evocative music and stunning visual effects, inviting young audiences to explore how this wind can change its surroundings. Ages 2-5.

Another incredibly powerful performance is We Come From Far, Far Away presented by NIE (Norway/UK/Czech Republic), which tells the story of two boys who have travelled alone from Syria to Norway and is based on true stories. Young at Art have designed an accompanying education programme and will be working with 360 schoolchildren in areas where Syrian families are settling. Ages 10 plus.

Maiden Voyage Dance return with a new show having enthralled previous festival audiences with Quartet for 15 Chairs and Pause & Effect. The Alien’s Guide to Dance Gone Wrong, created by world-renowned choreographer Lea Anderson, promises to be a fun feast for the senses, as aliens attempt to rediscover a thing humans used to do called dancing. Ages 4 plus.

Tim Peake Spacecraft
The Soyuz TMA-19M descent module is the historic spacecraft that brought Tim Peake back to Earth after his mission to the International Space Station.You can marvel at it by visiting the Ulster Folk and Transport Museum. It’s there until May 11th. The exhibition is free but Tickets for the VR experience for children over 13 are £6.(€6.90)

From Winterfell to the Iron Islands, this epic tapestry brings to life the infamous events, locations and story of Game of Thrones. (I’ve never watched an episode myself, but I hear it’s quite popular). Weaving the story from Seasons 1 to 7, this impressive tapestry gives Game of Thrones fans the perfect chance to reminisce over all the action that led to the finale of Season 7, with further panels depicting the story of Season 8 due to be added to the tapestry in June 2019. Designed by hand but weaved by a state-of-the-art machine and hand-finished in Northern Ireland, the linen used to form the background of the tapestry has been sourced from Ferguson’s Irish Linen, one of the last surviving linen mills in Northern Ireland. Admission is free. For more see nmni.com

Where to eat?
I brought my boyfriend’s mum Queenie and his sister Caroline to James Street South for a mini-hen party recently – Caroline is getting married soon. This great restaurant is currently offering a pre-theatre menu (Mon-Fri, 4.30-6.30pm), priced at only £19.50 (€22.50) for two courses, or £24 (€27.60) for three. We all recommend the baked Alaska which the kids will love. jamesstreetsouth.com

Where to stay?
One of the city’s newest places to stay the AC Hotel Belfast, opened on Belfast’s waterfront only last April. There are gorgeous views of the river Lagan and it’s just a stroll to the Cathedral Quarter, so it’s the perfect base for a weekend exploring Belfast. There’s a great deal on Sunday nights, where you can get a room for only £35 (€40.27) when you spend £75 (€86.28) in Novelli at City Quays, Jean-Christophe Novelli’s first restaurant in Ireland. marriott.com