I don’t want to swim. Taking off my clothes in the dressing room is too stressful

Michael Harding: ‘It’s the sight of my own body in the mirror that I find terrifying’ 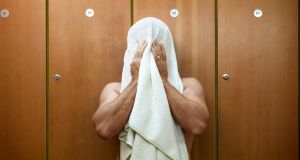 ‘Personally I don’t go to the sauna any more. And not because of blood pressure.’ Photograph: Getty Images

I went to see my cardiologist for a check-up in January, one year after having been given a stent. He looked at me, and said, “You appear to be a healthy man now. Just keep exercising. Walk walk walk. And take the tablets.”

That was a bit of a disappointment because I had hoped I would be free from all those little pills by now. But he said that taking statins and other heart-related tablets was a great investment in the future.

And I couldn’t argue with that.

I used to be ashamed of sitting at the breakfast table in hotels with a line of six tablets beside my bowl of muesli; but now I just feel grateful to be alive, and to have a travel pass.

In winter she arrives in his kitchen, and gets on great with her grandchildren even though he hasn’t a clue what she’s talking about

I remember a doctor suggesting I had a touch of blood pressure years ago, and I was highly insulted. It felt like an accusation.

“In my entire life, I never had blood pressure,” I declared, haughtily.

But that was a long time ago, before aging took its toll; before the prostate issue, the colitis problem, the heart attack and various bouts of depression.

And as my cousin in Galway says, “There’s none of us going up the ladder anymore – it’s down the ladder we’re heading.”

I have a young friend whose wife is Chinese and his mother-in-law comes from a remote village in the mountains. In winter she arrives in his kitchen, and gets on great with her grandchildren even though he hasn’t a clue what she’s talking about.

One day he was in the sauna of a local hotel, on the top perch with a few of his mates, while granny was in the pool, minding the grandchild. After a while granny stormed into the sauna and started giving off to him. He hadn’t a clue what she was saying but he didn’t want to be embarrassed in front of his mates, so he pretended he understood.

“Yes, yes, that’s fine,” he said each time she paused, until she went away, slamming the door behind her.

His mates looked like frightened roosters on the bench, their necks stretched out in wonder and curiosity.

“What the feck was all that about?” one of them wondered.

“She was worried about the child in the pool, “he said, “that’s all.”

But it wasn’t the child that was bothering her at all.

“What was your mother giving off about in the leisure centre?” he asked his wife when they got home.

“You were too long in the sauna,” his wife said, ”and she says it will give you high blood pressure.”

'My friend,' he said, 'that’s a windy day. Nothing more. Don’t be fooled by weather forecasters in Dublin who don’t get out often enough'

Personally I don’t go to the sauna any more. Not because of blood pressure. I had an argument with my doctor about it recently. He insists I should swim more regularly and that people can swim until they’re in their 90s.

“But I just don’t want to swim,” I replied. “It’s too stressful. Taking off my clothes in the dressing room is very challenging. It’s not that the other naked bodies bother me. It’s the sight of my own body in the mirror that I find terrifying.”

And besides, it’s too expensive. That’s why I got a small treadmill for the studio – so I can get up from my writing desk and exercise in isolation.

My friend came to visit one day during the big storm. He opened the door and a gust of wind came in ahead of him and flung dozens of pages off my desk.

“Close the door,” I screamed, “there’s a hurricane rising.”

I said, “Met Éireann is declaring a red alert in the west.”

“My friend,” he said, “that’s a windy day. Nothing more. Don’t be fooled by weather forecasters in Dublin who don’t get out often enough.”

Then he looked at my legs on the treadmill. “What on earth are you doing?”

“You’ll give yourself another heart attack,” he cautioned. “Come on out into God’s fresh air and we will walk up the mountain.”

And we did. Up the slopes of Arigna, as far as Spion Kop, and we looked out across the wild and angry sky towards Sligo.

“Is Kilronan Castle Hotel anywhere near here?” he wondered.

“Ten minutes away,” I replied.

“No way,” I replied. ”I wouldn’t want to get in trouble with your mother-in-law.”