Hilary Fannin: My one piece of advice for the festive season? Lower your expectations 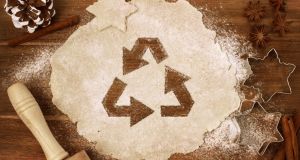 “In Ireland, we throw away a million tonnes of food every year at a cost of about €700 per family per annum.” Photograph: iStock

I was recently invited to take part in The Irish Times Women’s Podcast, a seasonal special where the talk was about preparing, both practically and emotionally, for the upcoming festivities.

Not being much cop at tips for a perfect turkey and somewhat lacking savvy in how to steer a course through turbulent family dynamics, my own or anyone else’s, my contribution essentially boiled down to one single piece of advice for surviving this most unique of holiday seasons: lower your expectations. And then, when you think they’re low enough, lower them again.

In my humble opinion, the only thing you need to do this year is limbo dance right under the onslaught and come out the other side still breathing.

There is still, in my admittedly laissez-faire thinking, absolutely no need to spin yourself dry under the Christmas glitterball this year

Odds-on you’ve done enough already: you’ve survived this difficult year; you’ve cooked and queued and queued and cooked; you’ve washed your arid hands and coughed into your wrinkly elbows. You’ve banged your pretty head off your laptop screen and spent hours trying to find your reading glasses so that you can decipher the code on the back of the modem when the Zoom link collapsed.

You’ve made banana bread, painted the ceilings, executed a reasonable downward dog, taken up conversational Japanese and brought the flatulent dog out for a walk. Brilliant. Well done. Take Christmas off. Have a bath. Read a book. Look out the window at the skeletal trees.

Accepting that many of us have responsibilities towards other people, there is still, in my admittedly laissez-faire thinking, absolutely no need to spin yourself dry under the Christmas glitterball this year.

I was speaking to my friend Mindy O’Brien, environmental attorney and co-ordinator of Voice (Voice of Irish Concern for the Environment), about the knock-on environmental effects of having a more subdued and sustainable Christmas this year. I asked her what we can do to cool down our Christmas ardour and have a positive impact on our environment.

Her response was simple and unequivocal: keep it local. Speaking about the deluge of paper waste and packaging that clogs up our homes at Christmas (this year more than ever, due to the volume of online purchasing), much of which may never get recycled, she pleaded that we should make a firm decision to support local businesses.

“Buy experiences,” she said. “Buying a voucher for a theatre, cinema or bookshop, or for a local restaurant that will deliver a meal to your door, will give us something to look forward to in the new year as the virus, hopefully, recedes. And if you are buying online, try to make sure that it’s Irish.”

Obviously no fan of instantly disposable stocking fillers, she suggests instead filling stockings with stuff you might use: a coffee cup, a toothbrush, a hat, gloves, seeds from grow-it-yourself garden suppliers, homemade jams and biscuits. (I flinched at the suggestion that I’d waste my valuable staring-at-the-grimy-ceiling time making jam, but Mindy, being a much nicer person than I am, was insistent.)

Finally, she pointed out that food waste is one of the largest contributors to climate change. According to the World Wildlife Fund, an estimated one-third of all the food produced in the world goes to waste. In Ireland, we throw away a million tonnes of food every year at a cost of about €700 per family per annum.

Later, I stood in my kitchen thinking that I might hang a bit of mistletoe off the barbells

“Think your menu through,” she said. “Maybe check out the Christmas recipes on stopfoodwaste.ie.”

I’ve been there, I thought, done that late-night lashing to the supermarket in a sudden onset of terror that cupboards will be bare by midnight. Fuelled by Mariah Carey telling you you’re all she wants for Christmas, or simply in a bid to escape Boyzone’s back catalogue, you fill up a trolley with three-for-two offers, lug everything home and whack it into the fridge. Then, a week later, you bin a load of stuff you barely recognise.

I will never again, I thought, find myself glumly communing with a wilting celery.

“Things get lost in fridges at Christmastime,” Mindy warned darkly, as if reading my mind.

“Yes, they do,” I replied. Sanity and a sense of humour being just two of them. Later, I stood in my kitchen thinking that I might hang a bit of mistletoe off the barbells.

A plaintive miaow from outside the kitchen window shook me out of my reverie. The cat’d look nice decked in a little wreath of holly berries, I thought, letting her in from the rain, a kind of furry eco Christmas fairy, sadly lacking in the twinkle department.