No haircuts, no manicures: this is the year that things changed

Tanya Sweeney: To be accused of not caring about your appearance used to be a huge denigration 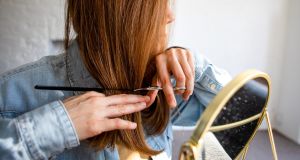 The only positive thing about walking into a hair salon for the first time in a year is that your stylist can’t really chastise you about home trims. Photograph: Getty Images

Down the years, I’ve spent an ungodly amount of money paying other people to do things to my body in the name of corporeal self-betterment. Waxing, threading, wrapping, scrubbing, manicures, pedicures… I’ve even let a woman stick a burning candle in my ear in the hopes of attaining wellness. I’ve silently floated in darkened tanks, taken “liminal sound baths” and sat in salt caves and called it “self-care”. If there’s a profligate, outlandish ritual that purports to make you feel better, I’ve likely given it a lash.

Of this ungodly amount of money and time, a lot of it was spent in hair salons. Tints, highlights, treatments, trends. I once spent a painstaking seven hours in a stylists’ chair going from dark brown to blond, like it was my professional obligation to look a certain way.

But just as this has been the year without friends, cinema visits and concerts, this has also been the year without haircuts. I didn’t have a hairstyle so much as a knife-accidentally-stuck-in the-toaster scenario. If I were living in the ‘80s, I’d be a thing of beauty. But we aren’t, so I’m not. Things up top had been decidedly crispy and dull, probably for the first time in my adult life.

It has been slightly liberating; fiscally, at any rate. With some measure of distance between the old me (pencil skirts, hot rollers, could cycle across the city in five-inch heels) and the new me (stretchy trousers, a permanent top-knot, no make-up), it’s easy to see how much energy and effort is expended on these beauty and grooming rituals.

In between lockdowns, I gladly booked a haircut, like many other women. I looked forward to taking some pride in my appearance again. But the appointments coincided with deadlines, or interviews, or just life. And this year, haircuts, and extensive personal grooming in general, somehow didn’t feel quite so important. Glamour – something I’d enjoyed and put emphasis on for so long – was entirely surplus to requirements.

It has been the year in which to ask: why exactly did I spend so much time and money on skincare, hair products, make-up and beauty treatments? Was I a marketeer’s impressionable dream? I suppose it all made me feel good. Ask any woman, and they’ll likely tell you that one of the best bits of a night out is the getting ready beforehand. The theatre of drawing on an artful face, with anticipation hanging in the air like cologne, the appraisal in the mirror on a particularly good hair day… well, it was my happy place.

This week, I had reason to excavate some glad rags, learn to walk in heels again and practise the perfect eyeliner flic

If you were so inclined, you could rail about the considerable emotional and financial labour involved in women attempting to attain a bodily ideal in the West. But the truth is, taking pride in your appearance, the putting of your literal best face forward, is something that bleeds into other parts of your life. These days, and starved of the usual attention it has been used to, my body feels like a battered old banger, used to ferry the kids to football practice.

It could be that the pandemic coincided with my becoming a new mum, but the fact is that I’ve had no energy or headspace to think about upkeeping berry nails, finding the right shade of red lipstick or keeping on top of my roots. I’m not exactly thrilled with how I look now, but the idea of a manicure also seems slightly ludicrous, too.

This week, I had reason to excavate some glad rags, learn to walk in heels again and practise the perfect eyeliner flick. I also went for my first haircut in months.

The only positive thing about walking into a hair salon for the first time in a year is that your stylist can’t really chastise you about home trims and cack-handed dye jobs, as can often be their wont. There were dreadlock-type knots squatting at my hairline that I hadn’t bothered to tease out (to her credit, my stylist managed not to look too appalled when I told her I usually just chopped them out with a scissors myself).

To be accused of not caring about your appearance has been a huge denigration, and one almost solely aimed at women.  We’ve been conditioned to put stock in this for so long. And to be fair, walking out of a hair salon with a new ‘do for the first time in ages did feel oddly like rejoining the world. I felt more “on the grid”. More visible, somehow.

Is the latter a good or a bad thing? I’m still trying to wrap my much healthier-
looking head around it.

The lack of available services in spas, salons and nail bars this year meant that women had one less thing (or 10 fewer things, depending on their dedication to the cause) on the to-do list. Returning to the art of make up, hair styling and tailoring is going to take a little getting used to, but I’ll admit that as a form of self-care, I’m quite looking forward to it.