Why some Irish women keep their pregnancies secret

Concealed pregnancies, such as one revealed in Co Offaly this week, are more common than most of us think 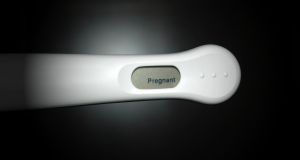 Concealed pregnancies: during a study carried out in 2015, midwife Sylvia Murphy-Tighe spoke to women who described their fear of being pregnant as “paralysing”. Photograph: Getty

The baby girl was stillborn. Her mother gave birth in a car in Birr, Co Offaly on March 29th, following a “concealed pregnancy” and presented at Midland Regional Hospital, Tullamore, afterwards. It was announced this week that a Garda investigation is under way following the discovery of the infant’s body – which is being treated as a “tragedy”.

Sylvia Murphy-Tighe is understandably upset by such stories. She knows from her work as a midwife and midwifery lecturer at the University Hospital Limerick that concealed pregnancies still occur in Ireland– and are more common than most of us think.

As part of her PhD at Trinity College Dublin (supervised by Joan Lalor from the School of Midwifery), in 2015 Murphy-Tighe carried out a study, called “Keeping It Secret”, of women who had gone through concealed pregnancies.

Thirty women approached her. Many wanted to help other women in a similar situation by deepening the public’s understanding of their experience. Some had concealed multiple pregnancies. Two were pregnant at the time. Of the babies born to the women, six were adopted and five spent time in foster care. There were seven perinatal deaths.

They blamed themselves, they suffered from post-traumatic stress syndrome and depression, mourning the loss of their baby

Their pregnancies occurred between the ages of 15 and 35 (the study’s respondents were all over 18 by the time of interview) and the women were of various nationalities including Irish, Polish and British. They came from varying levels of education and had “all sorts of jobs” during their pregnancies.

“These women described their fear [of being pregnant] as paralysing,” Murphy- Tighe says. “It’s not denial. They were fearful, and that impacted their ability to come forward [and present a pregnancy] earlier. They felt that if the news got out, there would have been consequences in terms of employment, a partner, or a family home.

“Those women never got help, they never told anyone and they grieved that loss. They blamed themselves, they suffered from post-traumatic stress syndrome and depression, mourning the loss of their baby,” says Murphy-Tighe.

One respondent bandaged her abdomen throughout her pregnancy. Another admitted that when she showered, she never looked down, and told herself that she had a cyst or tumour.

Chief among Murphy-Tighe’s findings was that healthcare practitioners “need to do better in terms of how they reach out to women in early pregnancy”.

“Healthcare professionals need more of an understanding of the sense of fear these women experience. They need to understand that these women may be living with domestic violence. I’ve heard of the most unimaginable traumas in those interviews: women who were met with a violent response by a partner when they told them of the pregnancy, and coped with all of it in secret and in private.”

Also, she says, “we need a greater psychological understanding in pregnancy, especially around how trauma can affect a woman’s coping response,” she says. Eleven respondents in the study mentioned experiences of early life trauma, including sexual assault or abuse. The early trauma had never been disclosed, so when they found themselves with an unexpected and often unwanted pregnancy they didn’t feel in control of their bodies or lives.

A cultural narrative around mothers who experience concealed or unassisted births has long existed, says Murphy-Tighe. They’re seen as young, naive, afraid to tell their parents and without the means to access a termination or raise a child. Murphy-Tighe’s interviewees, however, did not all conform to these profiles.

We need a greater psychological understanding in pregnancy, especially around how trauma can impact a woman’s coping response

“The literature often talks about women being in denial or having a mental health issue,” she says.“What I heard from these women, time and time again, is ‘we’re not bad, we’re not mad, but this has happened in our lives’. They’ve recounted negative experiences [with the healthcare system]. One participant told me that she had never experienced such a lack of empathy in her life.”

The midwife and lecturer would like to see an effort on the part of State agencies, such as the HSE, to update crisis pregnancy guidelines. She would like to see women signposted to confidential and nonjudgmental services with professionals who are trained in trauma-informed care, or those who can identify signs of domestic abuse.

She would also like to see a move away from a psychopathological understanding of concealed pregnancy and an acknowledgment of the multiple factors involved.

“We need a greater psychological understanding in pregnancy, especially around how trauma can impact a woman’s coping response,” says Murphy-Tighe. “People tend to think that this is something that doesn’t affect that many people, but that’s not strictly the case.”

Anyone affected by these issues can ring the Samaritans helpline 24 hours a day on 116 123, or access the HSE Crisis Pregnancy Programme by visiting crisispregnancy.ie

What is a micro-cheat and are you one?
8