Heatwave Horrors: Waking in pools of sweat from heat-inspired nightmares

Nefarious nightmares have a tendency to expose your scaredy-cat ways 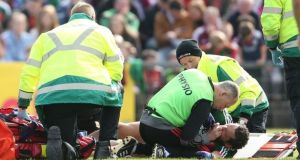 Horror of horrors: Mayo footballer Tom Parsons is treated by medical staff after his injury against Galway. Photograph: Cathal Noonan/Inpho

I have developed a habit recently of waking up in the middle of the night in pools of sweat from heatwave-induced horrors.

If you thought drink-induced horrors were bad, you should try these. Christy Moore could write a song about it: Delirium Celsius.

The latest episode of Niamh’s Nefarious Nightmares saw me lying on a football pitch with a leg broken so badly it was sticking out at a right-angle to my thigh.

It was a really dramatic, almost impossible-looking scenario and I vowed to myself there and then that I would never so much as attempt physical exercise ever again, just in case.

Then, the following night, I dreamt I was about to give birth with no time for painkillers or telling parents or buying houses or any of that nonsense.

It seems you can’t avoid excruciating pain come hell or high water in my heatwave horrors.

It did get me thinking, though, about the human body and its endurance.

The image of Mayo’s Tom Parsons buckling his knee in a tackle against a Galway player earlier in the summer has been hard to erase from memory.

But what really struck me was an interview he gave to Joe Molloy on the Off The Ball podcast a few weeks after the incident.

He had ruptured three out of the four ligaments in his knee and torn the fourth, while also tearing his calf and hamstring and dislocating his knee.

It is the type of injury usually only seen in car crashes. His entire knee looked like it had been ripped and twisted backwards and yet, just over two weeks after the incident, he sounded fine.

He did not sound like a man in agony.

He had undergone one surgery and was due to go for a second and had already set his mind to the task of getting back to playing football again – the very thing that had literally taken the legs from under him.

His courage and strength of character really stuck with me; I was in awe of his resilience and defiance, his will to get back playing.

Of course, for any sports player, that is natural. The first question that crosses their mind is when can I play again?

There is a real bravery in that, something that we don’t always give credit for.

The human body is mostly spoken about as a fashion item, a commodity. Something malleable that can be shaped and contoured to match the latest fashion trend.

It’s all about how it looks, not what it does.

Here I was, cowering over a little leg break or epidural-less birth in my night terrors

But our bodies are so much more than that. They are so resilient and self-healing, capable of the most impressive turnarounds.

From the depths of excruciating pain our bodies rise, again and again, to serve us.

Yet here I was, cowering over a little leg break or epidural-less birth in my night terrors.

You see, I took up football recently having never played before, and it took my dreams to remind me why I’d stayed away in the first place.

I’ve always been a big scaredy cat when it comes to pain. I avoided team sports and hazardous activities such as tree-climbing or gate-hopping like the plague as a child, mostly out of fear but also laziness, I suppose.

I haven’t been a patient at a hospital since the day my mother walked out with her (not so) little bundle in the 90s.

She had endured three days of labour and in the end an emergency C-section to deliver an almost 10lb monster who would one day go on to take the mick out of her in a national newspaper.

We were talking about unemployment last week and she touched on that very incident.

“It’s like childbirth, Niamh – you think it’s the worst thing in the world and then it’s over, and you forget all about it.”

Women across the country put themselves through it every day. Sportspeople put their bodies on the line, time and time again, even after suffering unimaginable pain and the inevitable lengthy rehabilitation.

When I woke up from my horrors I shook my boyfriend awake to ask him did he ever get scared about injuries before he went out to play football.

He laughed, told me no, and went back to sleep, not a bother on him.

He’s had a lot more hospital stays over football injuries than I have, and he didn’t even bat an eyelid at the thought of more.

So that’s the end of chicken-lickin’ Niamh, I’ve decided. No more scaredy-cat ways. Time to be a grown-up.

And if that doesn’t happen, the least I can hope for is an end to the heatwave terrors. Not that they’re scary. Not at all.