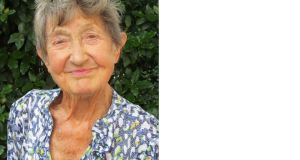 The death took place, in Durham, on June 30th, 2018, of Stephanie Saville, at the age of 91. Born in Dublin on May 15th, 1927, she was educated at Hillcourt School and Trinity College, where she studied medicine, graduating in 1949.

She had a distinguished career as an anaesthetist, holding appointments at the Royal City of Dublin Hospital, Bath, Bristol, Albany (in upstate New York), and again in Bath, before establishing herself in London. There, she worked for two years at St Bartholomew’s Hospital before being appointed to the Westminster Hospital as a senior registrar. In 1960, she was appointed a consultant anaesthetist at St Stephen’s Hospital, a post which she held until her retirement in 1987.

In 1954, Stephanie Saville was one of the earliest fellows by examination of the Faculty of Anaesthetists of the Royal College of Surgeons of England. At that time, anaesthetics had only been recognised as a specialty in its own right since 1948, with the inception of the National Health Service.

When she joined the staff at St Stephen’s Hospital, there was only one ventilator between two operating theatres, with no recovery room. She helped set up the intensive therapy unit at the hospital and was among the first to introduce epidurals as a regular practice in labour. She was also in the forefront of those who hastened the development of anaesthesia into the area of pain relief and started the pain relief clinic at St Stephen’s Hospital. At the time of her retirement, St Stephen’s Hospital had four well-equipped operating theatres, a large recovery area and an immediately adjacent intensive care unit.

She was a passionate supporter of the NHS and a superb mentor, helping trainees find their own way through problem situations.

An acerbic wit, she was extremely supportive of the total working environment of consultants, arranging communal meeting areas where they could both relax and discuss important issues, as circumstances dictated.

She had a passion for gardening and was very generous with plants. She often brought to the hospital what she termed an “instant garden”, a profusion of plastic carrier bags filled with plants from her own garden, ready-to-plant for someone who had just moved house and did not know where to start with their garden.

Her father, Cyril Saville, was company secretary of Jameson Whiskey and a Unitarian: he served as organist at the Church in St Stephen’s Green, Dublin, as did his father before him. Her mother, Evelyn Saville, was a key supporter in that church of the Rev E Savell Hicks, who, from 1910 to 1962, won wide acclaim for his sermons from people of all religious persuasions.

Stephanie Saville had a life-time commitment to Unitarianism and, on the occasion of her marriage to Thomas Atterton in 1965, she donated a lectern to the St Stephen’s Green Church, a less off-putting alternative to the pulpit for subsequent generations of lay readers. In London, in 1954, Stephanie Saville joined the Essex Unitarian Church in Kensington, a church which was completely redesigned, with a highly praised light and airy interior, by her architect husband, Thomas Atterton, and opened in 1977.

Stephanie Saville served this congregation for many years as a trustee, offering valued support to successive ministers. As chairwoman of the trustees, from 1993 to 2001, she steered the community with characteristic determination and vision.

In her retirement, she spent increasingly longer periods of time at her charming cottage near to Arundel, where she won prizes for her garden and welcomed her many friends with outstanding generosity.

A great lover of archaeology, she travelled widely in Greece and the Middle East, as well as exploring her adopted region of West Sussex, in pursuit of old buildings. She also valued her return visits to Ireland, where holidays spent in her youth with her Sligo-based friend, Noelle Middleton, were among her most cherished memories.

Stephanie Saville was a role model for many female junior hospital doctors coming up behind her. Her determination was only equalled by her compassion for humanity, which inspired all her thoughts and deeds.

There will be memorial services to celebrate the life of Stephanie Saville on Monday, July 23rd, at 11.30am in the Church of St Mary the Virgin, Burpham, West Sussex, and on Sunday, September 30th, at 11am in Essex Church, 112 Palace Gardens Terrace, Kensington, London.

What can you buy for €275k in Portugal, Spain, France, Greece, and north Co Dublin?
Real news has value SUBSCRIBE