Niamh Towey: I usually curse the roadblocks in the Phoenix Park but this morning my detour brought an unexpected revelation 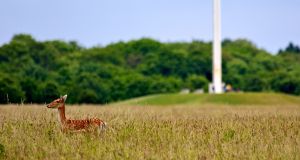 “Sitting in the car as the sun seared over the Papal Cross, I realised I had finally learned how to swim, all on my own. I was finally at peace with myself.” Photograph: iStock

Driving through the Phoenix Park shortly after sunrise has turned out to be an unexpected perk of moving house.

Starting work at 6am has many unexpected perks, such as the glorious afternoon nap and the boss-less bliss of the first few hours in an empty newsroom.

Also unexpected are the various roadblocks put in place on Chesterfield Avenue – the main road through the park – throughout the year.

Usually I curse them – “how dare you take over my park, Ed Sheeran?” or “these Bloom tents have a right bloody mess made of the place” – but this morning my detour stopped me in my tracks for the right reasons.

After being rerouted off the main road I found myself completely lost, following a road that skirted around the outside walls of the park without a notion of where I was going.

The sun broke through the beech trees that lined the route, dappling the road and the windscreen of my car with a harsh morning light.

It was deathly quiet at that hour, not even an exhausted parent pushing a pram in sight, and I was worried I would never find a way out.

Through the dappled darkness and meandering laneway, winding its way to what looked like nowhere, suddenly my whole world opened up in front of me as I came upon the great open 15 acres in the centre of the park.

Why do we have to be dead to be at peace?

The sun was almost fully risen, beaming atop the Papal Cross in an almost Godlike fashion.

I was really struck by the beauty of it, the feeling of being so far away from the world and so close to my own reality.

I felt very grateful for being able to witness it, without seeking it out, a moment of serenity and peace thanks to the beauty of nature.

I know that sounds daft, but there are sometimes moments in life where the humdrum of everyday fades away and you come to a larger realisation.

I have been thinking a bit about peace lately, and what it means to be at peace, and if we only ever get there when we are dead.

Death notices say “may he rest in peace,” but what if he was already at peace with his two tins of lager in front of the World Cup in the middle of an Irish heatwave?

Why do we have to be dead to be at peace?

Driving through the park this morning, I truly felt at peace – in a not-dead way.

I’m not sure if I felt this content since entering my 20s, a decade which so far has been filled with internal questioning and a longing for self-assurance.

You cannot be at peace with the world when you’re not even at peace with yourself. How can you fully appreciate others when you haven’t learned how to appreciate your own traits, or at least accept them?

Being at peace with yourself is something which has eluded me for a lot of my early 20s, and I don’t think I’m alone in that.

There is no roadmap to finding out what, where and who you want to be – and how to be happy with that.

When you hit puberty, there are parents and teachers eagerly ushering you through those rocky waters with leaflets about Tampax and college prospectuses, shipping you off to piano lessons and asking the local SuperValu manager about a part-time job for you.

And as much as you like to think you’re a grown-up when you go to college – you’re not. Your mother still washes your clothes and it’s socially acceptable to show up to lectures smelling like stale Karpackie and cigarette butts.

You are also surrounded by a large cohort of people who are your own age and want largely the same thing in life: to pass their exams and get a Coppers gold card.

There is no such buffer zone when you leave college and/or enter your 20s. Nobody tells you what to do in order to be successful, your dad cannot put in a good word for you at the serious job interview and there isn’t always a readymade social circle of people your own age waiting to be friends with you.

It can be lonely and isolating and definitely not peaceful.

Your mother isn’t waiting for you with a cup of tea at the end of a bad day, your friends are no longer in the same position as you and for maybe the first time in your life you are truly out on your own, learning how to swim, not sink.

Sitting in the car as the sun seared over the Papal Cross, I realised I had finally learned how to swim, all on my own. I was finally at peace with myself, for however long that might last.

Yeats was right though, peace does come dropping slow, but that doesn’t mean you have to be dead to find it.