‘I wanted to start a new life. I was sick of the situation in El Salvador’

New to the Parish: José Muñoz arrived in Ireland in 2016 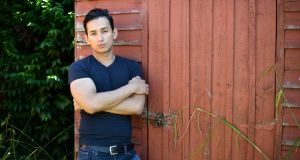 José Muñoz: “Living the rest of my life in El Salvador is not an option. We all know the situation isn’t going to change there, we want a better life.” Photograph: Dara Mac Donaill

When José Muñoz was seven years old he became separated from his grandmother while they were out shopping one afternoon. He still remembers the overwhelming panic he felt as he wandered through the streets of San Salvador desperately searching for a familiar face. Last month, while listening to a short piece of audio on a news website, his mind was transported back to those few hours of complete terror when, for a brief period, he believed he would never see his family again.

“I was only lost for two hours but I was devastated, I felt I was going to die. Listening to that audio my heart just broke. It brought me back to that moment and made me think these kids don’t know if they’ll ever see their families again. I nearly cried listening to those voices.”

The recording Muñoz had heard was of a group of distressed children who were detained after illegally crossing the border with their families between Mexico and the United States. Nearly two thousand children were separated from their parents after crossing the US border in April and May 2018 following the introduction of a “zero-tolerance” immigration policy by the Trump administration.

Muñoz knows many of the families detained at the US border under Trump’s new enforcement policy will have travelled from his home country of El Salvador. “People want a better future,” says the student as he sits in the warm sunshine sipping a glass of water outside a coffee shop in Temple Bar. “We all know the situation is not going to change. They know that if they stay in El Salvador because of the criminality and the political situation, things will just get worse. It’s a long journey across Guatemala and Mexico to get to the United States but they want a better life for their kids.”

When Muñoz was born in 1990 his country was still two years off signing the peace agreement that signalled the end of a 12-year conflict which had caused more than 75,000 deaths. The end of El Salvador’s civil war was also marked by the deportation of a number of immigrants residing illegally in the United States back to their small central American home country. While in the US, many young, disillusioned Salvadoran men had gravitated towards gangs, including the now infamous La Mara Salvatrucha – also known as MS13 – which was formed on the US west coast in the 1980s by Salvadoran immigrants. Many of these young men were sent back to El Salvador following the peace agreement, bringing with them a new culture of gangland warfare.

Today, the pressure for young men to join these groups is huge. “Teenage boys aged 15 up to men who are in their late 20s, we are all a target for them,” says Muñoz who will turn 28 later this year. “Most of them join because they have no choice. If they ask you to be a part of the gang you have to say yes. Otherwise they’re gonna kill you or your family.”

Before coming to Ireland, Muñoz worked in an office for a Colombian airline. The marketing and advertising graduate had always wanted to travel abroad and was growing tired of the constant violence in his home country. “I wanted to meet new people, see new cultures and improve my English. I wanted to start with a new life. I was sick of the situation in El Salvador, I needed to leave my country.”

Unlike the more than a million El Salvadorans who had chosen to move to the US for a better future, Muñoz was more interested in travelling to Europe. “I hadn’t heard of anyone moving from El Salvador to Ireland, I knew it was a very unusual destination for Salvadorans. There are about 60 of us all over Ireland now.”

While Muñoz was excited about his adventure abroad, he knew his mother would struggle to let him go. “When I first told her I was leaving she thought I was messing. But then she saw me checking flights online and asked ‘why?’ I told her I wanted to do something with my life. At first she asked me to stay but a week later she came back to me and said ‘you’re totally right, you need to go’.”

Muñoz arrived in Dublin in May 2016 and spent his first six weeks with a host family in Baldoyle before moving into an apartment with three Brazilians in Dublin 8. “It was very tough at first. I came here without knowing anyone. My first Christmas was really hard. I did nothing that day and really missed my family.”

Before leaving El Salvador, Muñoz had lived at home with his mother. “I didn’t have to pay rent, I only helped her with the bills. But here I had to pay everything which was hard. But it has helped me improve as a person. I’m not the same person I was when I left El Salvador. Living here has helped me to be more open- minded and accept the cultures and opinions of people from all over the world.”

Muñoz often worries about his mother’s safety in a country where last year 3,947 people were murdered. Violence against women is also becoming increasingly prevalent with 152 murders of women between January and May of this year, according to the country’s national police force. “My mother tells me that back in the 1980s nobody was allowed to go outdoors after 6pm in the evening and there were soldiers on the streets with guns. Nowadays the soldiers are the gang members. It’s basically the same thing. The government doesn’t want to admit it but we are in a war.”

Muñoz wants to stay in Europe but says he’s not sure if he will remain in Ireland. For now he is working for a sunglasses company in Dublin and will begin a degree in information technology in the CCT College in September. He’s also planning his first trip home in March 2019. “I want to stay in Europe because I like the culture and I feel much safer here. I love my country and it’s a beautiful place, I’m proud of being Salvadoran. But living the rest of my life in El Salvador is not an option. We all know the situation isn’t going to change there, we want a better life.”

Sorcha Pollak’s book based on this series, New to the Parish: Stories of Love War and Adventure from Ireland’s Immigrants, is out now