‘I wouldn’t be surprised if after a day’s taoiseaching, they changed the batteries in the back of his head and put him in a cupboard’ 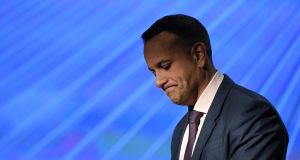 Every day we can see and hear carefully curated information about Leo Varadkar, yet it all adds up to a curious nothingness. File photograph: Clodagh Kilcoyne/Reuters

A while ago there was a bit of a stink when Leo Varadkar said he empathised with Donald Trump.

At least that’s what was reported: this was at a private lunch in New York, part of the Government’s attempt to love bomb itself on to the UN Security Council.

What he (apparently) said was that he sympathised with Trump’s view on the media – which might have been a joke. It’s difficult to imagine that Leo could equate his attitude to and experience of the press – which is presumably that it can be an occasional pain in the ass – to Donald Trump’s apocalyptic view of journalists as enemies of the state. Nonetheless, it invited a good amount of political point scoring (the mask has slipped!) and a bit of a wounded, touchy reaction from the media itself. (He’s got so much positive coverage!)

The story was a dodo within 24 hours anyway. Leo flew back to Dublin, served up a few pro-media pieties in the Dáil and that was it. Leo does good humble – he has a way of umming that’s reminiscent of Bertie – so he effectively strangled any accusations that he might harbour secret Trumpian ambitions to become the unchallenged Emperor of Ireland.

Yet it was a curious misstep from a Taoiseach who seems to concentrate so much on what comes out of his mouth. Trump uses his Twitter account as a battering ram, while Leo’s Twitter and Instagram is all soft focus, presenting average-guy vignettes and bland aspirational policy statements.

He is a politician in the same mould as Macron and Trudeau – and mould is the appropriate term here. It’s like he was produced in a factory, after several intensive sessions with a focus group aimed at coming up with a politician reflective of a young, multicultural, inclusive Ireland: still in his 30s, gay, immigrant background, doctor, fit. Doesn’t bring visiting heads of state for pints of Guinness but goes jogging with them instead. He once represented Ireland at tennis.  He’s on social media. His middle name is Manohar. He’s a fan of LCD Soundsystem. Every day we can see and hear carefully curated information about our Taoiseach, yet it all adds up to a curious nothingness; like he doesn’t really exist.

There’s never been a Taoiseach so adept at controlling his image. They’ve all tried, of course, but their humanity always seeped past the edges. Enda was terrible at debating, Charlie had notions. The flaws hinted at who they might really be, what they might be like at home. I have no idea what Leo Varadkar might really be like. I wouldn’t be surprised if after a day’s taoiseaching, they changed the batteries in the back of his head and put him in a cupboard.

Of course none of this should matter. In private he might be an utter delight. I hope he is. He might be a tremendous Taoiseach. But given that we know so little about him and his beliefs, and what we do know is so carefully sanitised, it’s difficult to tell. This image-curation seems to work for the big-ticket, feel-good issues such as the two referendums or winning as place on the UN Security Council, but is less useful for the more prosaic, complex problems, like combating homelessness or reforming the health service.

And this is the media-savvy age: everyone knows that most of what we are told about Leo is spin, and that makes every piece of information connected to him potentially suspect. We don’t know what’s true and what isn’t. For instance: his middle name is Eric and I’ve no idea if he’s ever played tennis.