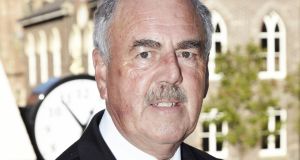 Hugh Dougal: in 1988 he escaped injury when Michael Stone attacked a funeral at Milltown Cemetery in Belfast

Hugh Dougal was one of Belfast’s leading funeral directors. He was known for the meticulous and respectful way he carried out his work and for his compassion for bereaved families. He was the third generation of his family to own and operate Hugh O’Kane & Co.

Hugh Joseph Patrick Dougal was born in the city in February 1946, the youngest of four children and only son to Hugh Dougal, a funeral director, and his wife, Rosaleen (née McGlade).

He went to Holy Rosary Primary School in south Belfast, then St Malachy’s College. After leaving school he worked as mechanic in the family business, then moved into funeral directing proper, familiarising himself with all its aspects. He took over the business about 30 years ago, after his father’s death.

As a funeral director Dougal worked through the most intense period of the Troubles. In 1988 he escaped injury in one of the most spectacular incidents of those years when Michael Stone, a loyalist, attacked a republican funeral at Milltown Cemetery in the city. During the Troubles Dougal’s firm was responsible for collecting bodies of the deceased in Belfast and bringing them to the city mortuary. Among the appalling incidents he had to deal with were the La Mon House attack of 1978, when an IRA bomb incinerated 12 civilians, and the Shankill Butchers murders of the 1970s and early 1980s, when a UVF gang used knives to kill 23 civilians, almost all Catholics.

He took his pastoral role seriously, doing his best to comfort families. He worked on the principle of treating others as he would his own.

Dougal was respectful of the dead. Some families failed to collect the ashes of loved ones after cremation. He always kept these. They were human remains, and had to be treated with reverence. There was no way he would throw them out.

He had a deep Christian faith, old fashioned in the positive sense. In retirement he tried to attend daily Mass. He was conscious of his social obligations. For three generations his family had been comfortably off businesspeople. He was aware not everyone was as blessed as he was.

An example was his helping to organise the funeral of an elderly man who had come from the country to Belfast, fallen on hard times and become homeless. No relatives could be found. Dougal made sure the funeral Mass had music of the highest standard and that the deceased had the most dignified of funerals.

That Christian spirit made him noted for excellent relations with staff, whom he saw as part of his extended family. They referred to him as Daddy Hugh.

He liked a simple lifestyle. Rather than travel abroad he went to Ballycastle, in north Co Antrim, as often as possible to play golf. That reflected his quiet and shy personality, with a gentle humour, and a knack for playful banter.

He is survived by his wife, Frances; daughter, Cathy; son, Hugh; and sisters Sheila, Eleanor and Anne.

A family favourite cake, piled high with the best of berries
Real news has value SUBSCRIBE