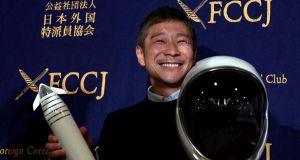 A Japanese billionaire is looking for a “special woman” to join him on Elon Musk’s mission around the moon.

Yusaku Maezawa, the founder of Zozo, Japan’s largest online fashion retailer, has invited women interested in accompanying him on Musk’s Big Falcon Rocket in 2023 to apply online for a “planned matchmaking event”.

Maezawa, who recently split up with the model and actor Ayame Goriki, said he was again looking for love. “I’m sure I’ve been able to acquire my share of money, social status, and fame along the way,” he wrote on his website.

“But now I’m restarting my life. I’m 44 now. As feelings of loneliness and emptiness slowly begin to surge upon me, there’s one thing that I think about: Continuing to love one woman. I want to find a ‘life partner’. With that future partner of mine, I want to shout our love and world peace from outer space.”

Women hoping to join Maezawa on Musk’s SpaceX project must be over 20, have a “bright and positive” personality and have an interest in space travel, the website says. The deadline for applications is this Friday – January 17th – with a final decision to be announced at the end of March.

The invitation, extended at the weekend, is the latest in a series of eye-catching tweets from Maezawa, who sold Zozo to the Softbank group for 400 billion yen – more than €3 billion – at the end of last year.

Last week he promised to give 1 million yen – about €8,000 – each to 1,000 of his seven million Twitter followers as part of a “social experiment” to see if the cash would make them happier.

The recipients will be selected at random from those who retweeted Maezawa’s New Year’s Day Twitter post, with the impact of the money to be tracked through regular surveys.

The handout is a drop in the ocean for Maezawa, an avid collector of art and sports cars who is said to be worth around €2.7 billion, according to Forbes.

If Musk’s attempt at lunar exploration succeeds, Maezawa would become the first private passenger to make the trip around the moon.

He and his partner would have more than each other for company, though. When Musk introduced him as the first person to sign up for the SpaceX project, in September 2018, Maezawa said he wanted at least half a dozen artists from around the world to join him.

“They will be asked to create something after they return to Earth,” he said. “These masterpieces will inspire the dreamer within all of us.”

Musk has conceded that the lunar mission would be dangerous. The Tesla chief executive will be hoping that his spacecraft fares better than the “armoured glass” windows of his cybertruck, which shattered when the vehicle was unveiled last November. – Guardian

Why did no one tell me IVF can lead to problems breastfeeding?
6

Paddy Holohan: ‘MMA was a liferaft to grab onto’
8

7 tips to improve your sprinting
10