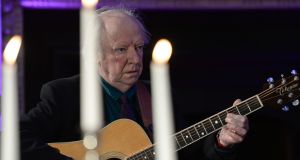 Arty McGlynn was an affectionate father, deeply rooted in his family and home place. Photograph: NurPhoto via Getty

Arty McGlynn was the first musician to put the steel string guitar up front and centre in Irish traditional music. He did it with unparalleled virtuosity. His death on December 18th, after a lengthy illness borne stoically, marked the passing of a musician whose legacy is felt among musicians and fans across traditional, contemporary and jazz music.

McGlynn grew up in the townland of Botera (after which he named his final album, released in late 2018), a few miles outside of Omagh. Music were stencilled deep within his DNA. His mother Mary (née Kearney) came from the townland of Cavanacaw, and played the fiddle. Mary’s father, Felix Kearney, was a well-known local poet and songwriter, and her two brothers, Feely and Arthur Kearney were both fine fiddle players too. McGlynn’s father Jim played the accordion and hailed from The Cran, Aughadulla and on his last album Arty dedicated The Cran Man Jig to his father, which he partnered in characteristically lateral-thinking fashion with a levitating version of Duke Ellington/Billy Strayhorn/Johnny Mercer’s Satin Doll. For McGlynn, musical boundaries were an adventure to be explored, never a line to be sidestepped.

McGlynn was playing reels proficiently on the accordion by the age of five. Such was the discrepancy between his physical size and the weight of the box that he would balance it on the kitchen table while playing. The table bore testament in perpetuity to its supporting role in McGlynn’s musical career, by way of an imprint of the accordion bellows on its surface. His mother bought him his first guitar at the age of 11, and he practiced endlessly, using Bert Weedon’s guitar primer, exploring the nether regions of augmented 7th and discordant 5ths. After a chequered career in Cúlmore Primary School and later, in the Christian Brothers Secondary School in Omagh, where no harness could corral him, McGlynn funnelled an innate passion for learning into music.

In the 1950s McGlynn spent many formative years tuned into American forces radio broadcasts on a German radio station. It was there that he developed a taste for jazz and r ‘n’ b and where he discovered guitarist Wes Montgomery and tenor saxophonist Jean-Baptiste “Illinois” Jacquet.

McGlynn’s remarkable work ethic was forged early. He was making a living playing professionally from the age of 15, with his first band, The Melody Men. He toured the UK and USA with numerous bands in the 1950s and 1960s, when he extended his range of instruments to include the pedal steel guitar. After stints with The Plattermen and Brian Call and The Buckaroos, McGlynn left the showband world to record his first widely acclaimed solo album, McGlynn’s Fancy in 1979. This was the first album to feature Irish traditional tunes played meticulously and imaginatively on the steel string guitar.

The breadth of his musicianship led to collaborations with Christy Moore, Paul Brady, Liam Ó Flynn and Dónal Lunny, not to mention his pivotal role as musical director with Van Morrison for a period. He was also a key member of Patrick Street and played with Planxty and De Danann. In truth there were few leading traditional musicians whose music was untouched by Arty McGlynn’s virtuoso playing.

With his wife, Nollaig Casey, McGlynn recorded two albums, Lead the Knave and Causeway, and produced highly successful albums for Four Men & A Dog and Christy Hennessy, among others. More recently he had enjoyed playing with The Heartstring Quartet, with his wife, her sister, harpist Máire Ní Chathasaidh, and guitarist Chris Newman.

McGlynn’s straight-man demeanour on stage belied a droll sense of humour. He was extremely funny and sharp witted. His naturally shy demeanour belied his quiet power as a musician. He was a talented photographer of people. Material wealth meant nothing to him.

McGlynn was an affectionate father and deeply rooted in his family and home place. He was sensitive and gentle, yet unforgiving in his honesty. He was strong willed and stubborn, yet good hearted and extremely generous. He recognised that he had a talent but was never boastful about it. Instead, he accepted it without ego, recognising his talent as something to be shared – and so he was very encouraging to younger musicians. A musician’s musician, creative to his very last breath.

McGlynn was predeceased by his first wife, Phyllis Quinn, and by his older brother and sister, Gerry and Máire. He is survived by his wife Nollaig, daughters Aoife and Órfhlaith, sons Paul, Jerome and Justin, his brothers Kieran and Pat, and his sister Ann.