Yusaku Maezawa will become the first private passenger on a rocket around the moon when he travels with Space X in 2023. Video: Reuters 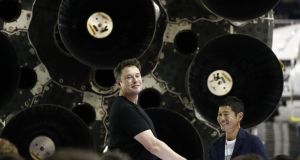 Elon Musk, ceo SpaceX, left, shakes hands with Yusaku Maezawa, who will be the first private passenger on a rocket around the moon. Photograph: Patrick T. Fallon/Bloomberg

Elon Musk plans to launch Japanese billionaire Yusaku Maezawa on a rocket around the moon, the embattled SpaceX CEO announced on Monday.

Maezawa, a 42-year-old art collector and entrepreneur who founded Japan’s largest online fashion retailer, could be the first private passenger to make the trip around the moon. The Big Falcon Rocket (BFR) has not yet been built.

“This is my lifelong dream,” Maezawa said in a speech on Monday, announcing that he would be inviting artists to join him on his 2023 trip. “I choose to go to the moon.”

Before he introduced Maezawa, Musk outlined his company’s space travel goals, warning of a possible event that could “end civilization”, adding, “We should take action and become a multi-planet civilization as soon as possible.”

The announcement comes at a turbulent time for Musk , who has been embroiled in a string of scandals in recent months stemming from his unusual tweets and erratic behavior .

The Tesla CEO has repeatedly launched online attacks against a British diver who helped rescue children from a cave in Thailand, baselessly accusing him of being a “child rapist” and “pedo”. The diver, Vernon Unsworth, filed a defamation lawsuit against Musk on Monday, seeking at least $75,000 (£57,000) in damages while also launching cases in the English and Welsh courts.

Last year, Musk unveiled plans for the new spacecraft that he said would allow SpaceX to build a base on the moon, colonise Mars, and enable commercial travel to anywhere on Earth in under one hour. He previously targeted the first launch by 2022, saying he would send a crewed flight to Mars by 2024.

Musk called the trip a “dangerous mission” and said he couldn’t promise SpaceX would make the 2023 deadline: “We’re definitely not sure.”

Musk has consistently attracted massive publicity for his space stunts and ambitious promises , with some critics calling the launch of a sports car toward Mars a major advertising feat for Tesla. Musk and SpaceX engineers had built a small submarine to assist Thailand with the cave rescue, but authorities did not use the device during the successful mission saving 12 young footballers and their coach, and Unsworth called it a PR stunt.

As the “paedo” controversy was recently escalating, Musk attracted further negative headlines by smoking marijuana live on a web show . When questioned about his actions, he told the Guardian by email: “Guardian is the most insufferable newspaper on planet Earth.”

Tesla shares crashed 6% after he did the show, which came amid the resignation of two senior executives.