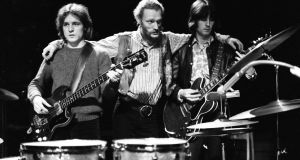 Jack Bruce, Ginger Baker and Eric Clapton of Cream during their farewell performance at the Royal Albert Hall, London, in 1968. Photograph: Susie Macdonald/Redferns

Before Ginger Baker, the drummer used to be the quiet one at the back of the stage whose job was to keep time. Baker, who has died aged 80, pioneered the image of the rock drummer as a flamboyant virtuoso, engaged in a dynamic interaction with the musicians around him.

Baker found fame with Cream, the 1960s rock trio also featuring Eric Clapton and Jack Bruce, whose two-year career inspired a new wave of blues-based rock bands. Cream is now seen as the first “supergroup”, comprising outstanding musicians each of whom was blazing a trail on his respective instrument. Baker brought a freewheeling energy to his drumming. He was not abnormally fast or flashy, but he was innovative, using twin bass drums and displaying a flair for African-influenced beats. Baker often claimed he never practised, but relied on spontaneous inspiration when playing with other musicians.

In 1962 Baker, then a jobbing drummer in London’s jazz clubs, had been recommended by Charlie Watts, the future Rolling Stones drummer, for a job with Alexis Korner’s Blues Incorporated, where he first encountered Bruce. Along with Graham Bond and the saxophonist Dick Heckstall-Smith, the pair formed the Graham Bond Organisation, playing a form of jazzy rhythm and blues that won them a devoted following. However, they also developed a hostility that eventually led to Baker firing Bruce from the band.

Baker then approached Clapton, the rising star of British blues, with a view to forming a new group. Clapton was enthusiastic, but insisted on bringing in Bruce on bass. Despite misgivings, Baker agreed. The group split up in November 1968, at least partly because of the violent antagonism between Baker and Bruce.

Following Cream’s demise, Baker joined a new “supergroup”, Blind Faith, with Clapton, Steve Winwood (from Traffic) and bassist Ric Grech (from Family). Despite the huge success of Blind Faith’s eponymous 1969 album the band disintegrated that October, after completing a US tour. Baker was bitterly disappointed to find that Clapton was jumping ship (he departed to form Derek and the Dominoes) and decided he would form a band of his own.

He brought Winwood and Grech into a new jazz-rock fusion project, Ginger Baker’s Air Force. Winwood and Grech stayed long enough to appear on the group’s first album before departing to join a reunited Traffic. Without Winwood or Clapton, however, Baker could not pull the crowds.

After a near-fatal cocaine overdose in 1970, Baker realised he needed a complete break and, travelling by Land Rover, went to Lagos, Nigeria, where he opened a 16-track recording studio, Batakota (ARC) studios. Baker immersed himself in the rhythms of African music, and also joined the Lagos Polo Club. He retained his enthusiasm for horses and polo for the rest of his life.

In 1974 Baker formed the hard rock band Baker Gurvitz Army back in London but the the group fizzled out and finding himself penniless and reduced to selling drugs, Baker left his wife, Liz (nee Finch), whom he had married in 1959, and three children, and headed for Tuscany with his girlfriend, Sarah, to try to survive as an olive farmer (the pair married in 1983, but divorced the following year).

He was rescued by record producer Bill Laswell. “The farm was a disaster,” said Laswell of Baker’s Tuscan retreat. “There was no electricity and he had this tiny bed he would sleep in with his dogs. It’s a miracle that he was still alive.”

Peter Edward Baker was Born in Lewisham, southeast London where his red hair earned him the nickname “Ginger”. He was the son of Ruby Streatfield, who worked in a tobacconist’s, and Frederick Baker, a bricklayer who was killed while serving with the Royal Corps of Signals in 1943. The young Ginger was aimless and unmotivated until he discovered a passion for competitive cycling. This ended abruptly after his bike was wrecked in a collision with a London taxi. Then he experimented with playing drums belonging to a friend from Shooter’s Hill grammar school, which inspired him to buy his own set for £3. “I thought, good God, at last there’s something I can do,” he recalled.

He began playing music part time while working as a signwriter and then with an advertising agency, but after earning £12 for a week’s work with the Storyville Jazz Band he decided to turn professional. An unfortunate side-effect of his stints in London jazz clubs was a heroin habit that would dog him into the 1980s.

In 1988 Baker had moved to Los Angeles, where he met and married his third wife, Karen Loucks. He managed to fit in stints with the Ginger Baker Trio, with the guitarist Bill Frisell and the bassist Charlie Haden, and even briefly reunited with Bruce alongside the guitarist Gary Moore in BBM. But in the late 1990s, problems with the tax and immigration authorities forced him to leave the US.

He bought a farm in KwaZulu-Natal in South Africa, but upset the local all-white polo club by importing a team of black Nigerians. Again forced to move, he resettled in Tulbagh in the Western Cape. In 2010, he was married for the fourth time to a Zimbabwean woman, Kudzai Machokoto.

in 2005 an impoverished Baker had to sell up and leave South Africa. He returned to London. Baker, who had been suffering from degenerative osteoarthritis and a smoking-related pulmonary condition, is survived by Kudzai, his children, Nettie, Leda and Kofi, and a stepdaughter, Lisa.

How do you get bereaved fathers to talk? Bring a football
7

Yotam Ottolenghi: How to turn yesterday’s bread into a feast
9