Carroll was a match for Joan Collins’s Alexis, doubling the ‘nasty’ in Dynasty 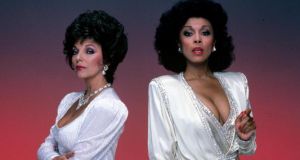 Born: July 17th, 1935
Died: October 4th, 2019
When Dominique Deveraux first met Alexis Colby in episode 87 of the TV soap opera Dynasty in 1984, another high hurdle towards racial equality was overcome. Dominique was glamorous, sophisticated, wealthy and intelligent, but just as conniving as Alexis. She also just happened to be African-American. Played by Diahann Carroll, who has died aged 84, she was a match for Joan Collins’s Alexis, doubling the “nasty” in Dynasty.

Carroll was among the foremost African American actors to break down long-seated prejudices in casting. She was the first black performer to have her own sitcom, with Julia, which ran for 86 episodes (1968-71), and the first to win an Emmy in the category of best actress in a leading role in a comedy series. She also won a Tony for her performance in the Broadway musical No Strings, written especially for her by Richard Rodgers, which highlighted an interracial romance without mentioning colour.

Born in the Bronx, New York, she was the first child of John Johnson, a subway conductor, and his wife, Mabel (nee Faulk). When their daughter was an infant, the family moved to Harlem, where she grew up.

She started singing at the age of six with a Harlem church choir, a few years later becoming a recipient of a Metropolitan Opera scholarship for studies at the New York High School of Music and Art. After graduating she attended New York University, majoring in sociology.

At the same time, having done modelling for Ebony magazine, she won a talent contest using the name of Diahann Carroll. This led to her performing on radio and television and in nightclubs while still in her teens. Her big break came in 1954 when Truman Capote chose her for a leading part in the Broadway musical House of Flowers, based on his short story and for which he wrote the book and lyrics. In the same year Carroll made her film debut in Otto Preminger’s Carmen Jones.

She appeared in numerous films over the next 20 years and then came Claudine (1974), a romantic comedy and one of the few mainstream movies starring black actors in the 1970s that was not described as “blaxploitation”. Carroll, whom a critic described as being of an “unglamorised loveliness”, was witty, warm-hearted and self-deprecating as a Harlem widow on welfare with six children to bring up, who is courted by a garbage collector played by James Earl Jones. Surprisingly, after being Oscar-nominated as best actress for Claudine, Carroll did not return to feature films for 16 years.

The reason was her rewarding work on television, namely the popular sitcom Julia, in which she played a widowed middle-class single mother. The role came in for some criticism for being apolitical, and a far cry from the reality of most black lives. But Carroll’s positive portrayal outweighed the negative.

Carroll was married and divorced four times: to the record producer Monte Kay, with whom she had a daughter, Suzanne; to a Las Vegas boutique owner, Freddie Glusman, whom she divorced on grounds of physical abuse; to a managing director of Jet magazine, Robert DeLeon, who spent large amounts of her money before dying in a car crash; and finally to the crooner Vic Damone, who neglected her for golf. She was engaged to David Frost from 1971 to 1973. Much about these relationships was revealed in her memoir The Legs Are the Last to Go (2008).

She is survived by Suzanne, a journalist, and two grandchildren, August and Sydney. – Guardian