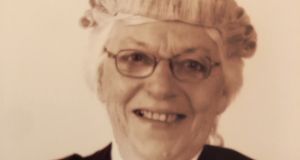 Anne Bunni, barrister and the first woman to chair the Chartered Institute of Arbitrators in Ireland, has died.

The mother-of-six returned to education at the age of 40, became a barrister and arbitrator and was a vice-chairwoman of the Employment Appeals Tribunal, now part of the Workplace Relations Commission.

Born Anne Carroll, in Dundalk 82 years ago, she attended St Louis Convent before leaving for Manchester to become a nurse. It was here that she met Nael Bunni, a young engineering student from Iraq. A whirlwind romance followed, and they married in 1962. The couple moved to London to allow him to complete his PhD studies, by which time she had given up nursing.

His scholarship conditions meant that he had to return to work in Iraq after finishing his studies. The couple had a small baby at this stage, so they bought a Simca car, loaded up their belongings and drove to Baghdad.

Bunni was captivated by Iraq’s beauty, its people and its history and lived happily there for several years. But, as political tensions mounted and the situation became increasingly volatile, the couple reluctantly decided it was no longer safe. They left Baghdad for Dublin in the summer of 1969, now with three children in tow. Howth became their family home and three more children followed.

When her youngest child was two, Bunni began training to be a barrister and was called to the Bar five years later. She specialised in family law and found it hugely satisfying but struggled with the work atmosphere in what was then a loud and bustling Law Library. She had an insight into the world of arbitration through her husband’s job as an international arbitrator and decided it was something that would interest her.

She threw herself into her new career with gusto, becoming secretary of the Irish branch of the Chartered Institute of Arbitrators in 1990, and its first chairwoman in 1996. She also found time to complete a diploma in European law at UCD in 1991.

Bunni was involved in setting up several industry-focused arbitration schemes through her work with the institute. On seeing the chaos that ensued after a travel agency collapsed when she was abroad on a family holiday, she was instrumental in ensuring the introduction of arbitration as an option in disputes between consumers and travel agents.

She was appointed vice-chairwoman of the Employment Appeals Tribunal in 1996 and served until she reached retirement age in 2003. Former colleagues and friends spoke of her skill for clear, analytical thinking and diplomacy.

Retired judge and close family friend Mr Justice Paul Gilligan said Bunni was “quite simply an unusually-gifted person. She will be sorely missed and fondly remembered by all those whose lives she touched in her work as a barrister, an arbitrator, in the Employment Appeals Tribunal and in the social environment.” He said she had served with distinction on the Employment Appeals Tribunal and was “a skilled arbitrator who brought more than 40 arbitrations to a conclusion with awards being published in all.”

Bunni loved to travel and accompanied her husband on many of his international work trips. Family members said it was difficult to name a city she had not been to. She had accumulated a network of friends around the world and many of them paid tribute to her on online forums since her death, recalling her hearty and infectious laugh, her keen intuitive skills and the wise counsel she offered.

She suffered some ill-health in recent years but retained her sharp instincts to the end and had some strong opinions on the political machinations in Westminster and Washington.