Delia Kennedy obituary: School principal with a passion for education

Lives lost to Covid-19: ‘She told us she was the first single woman to get a mortgage in the 1970s’ 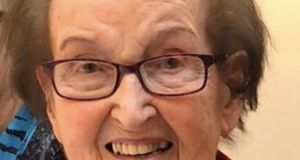 Delia Kennedy (94), from Drumcondra, who has died of Covid-19, pictured in 2019. Grandchildren remember how she often posted them exam hints cut from newspapers.

Delia Kennedy always joked to her children that she never would have married if she had known she would end up in Dublin.

Born on November 8th, 1925, in Rossmore, Co Tipperary, Kennedy met her husband Paddy at school in Thurles. The couple moved to north Dublin in the 1950s and had five daughters – Catherine, Breeda, Patricia, Grainne and Sinead.

“She was a Tipperary girl and life was small then,” says Patricia. “When she arrived in Dublin she said she saw poverty that she never saw in Tipperary. She saw people barefoot in Gardiner Street and people sitting outside the steps of tenements playing cards because of a lack of employment. She found it very shocking when she came here.”

Kennedy did however “embrace Dublin life” and began teaching in schools in the inner city in the 1970s. She also undertook a degree at night, securing a BA in French, English and Irish from UCD.

She later got a permanent position at St Mary’s National School in Fairview where she eventually became the principal. When Kennedy’s husband passed away in 1974, she went about securing a mortgage which was no easy feat for a widow at the time.

“She told us she was the first single woman to get a mortgage in the 1970s and she was very proud of that,” Patricia says. “We moved after my dad died and she had to buy a house and that was unheard of.

“She had a salary and went to her bank manager and he said he was absolutely thrilled the day her mortgage was passed because he said the amount of questions that were asked higher up the line in the bank such as ‘why does a single woman want to get a mortgage?’”

Kennedy’s passion for education remained strong throughout her life and her grandchildren remember how she often posted them out newspaper cuttings of exam hints and techniques.

Kennedy entered the Mater Hospital in Dublin in February with what was believed to be a kidney infection and was subsequently transferred to Clontarf Hospital.

She died at the hospital on April 24th, aged 94, and a small funeral was held at Mount Jerome crematorium. Her family plan to bury her ashes with her late husband in Thurles.