‘Women struggle everywhere. There’s this feeling that you are an inferior being’

Palestinian Ruba Shamshoum and her husband arrived from Nazareth in 2012 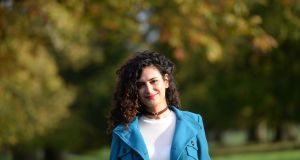 Ruba Shamshoum used to hate standing on stage in front of an audience. She loved singing privately but was petrified of performing in public. “I always liked to sing but I was very socially awkward. I didn’t feel comfortable in my own body. At first I hated the stage but for some reason I kept on going. It’s funny how I went for the thing that scared me the most.”

Shamshoum was studying English literature and education for people with special needs at Tel Aviv University when she began singing with a 1990s rock group on campus. The aspiring musician was born and grew up in the city of Nazareth, the largest Arab city in Israel, among a generation of young Palestinians who were able to “break the boundaries”.

“There’s so much talent in the city and many people go to university now and aspire to work in high-tech jobs. I find that in Nazareth people are breaking the limits of the generation that came before us. Before you either became a doctor or a lawyer or an architect but today people, especially women, are actually able to study music.”

Brought up in a Catholic household, Shamshoum’s parents never discouraged her from pursuing her passions. However, outside the home she learned that women were often considered second class citizens. “We’re in this twilight zone where women in Arab society are constantly trying to find our place in the world. I think it’s a fascinating time because it gives us the strength to do what we actually want to do. Women struggle everywhere. It doesn’t matter where you are, Ireland or any other country, there’s still this feeling that you’re an inferior being.”

Shamshoum continued building her confidence as a musician throughout college and after graduation she decided to focus on music full time. “I was at a crossroads and my boyfriend, he’s my husband now, he said just go for it, study music. I really wanted to get into the theory of music and understand what musicians were saying. Music can be very male dominated and I often felt like I was the only woman. I wanted to understand what they were saying.”

A three-year course in music performance forced her to overcome her fear of performing for a crowd. “The more I studied movement and singing, the more I found my place on stage and felt more comfortable. And today I feel like it’s the only place where I can completely let go. It’s a place where I can be emotional and be a drama queen as much as I want.”

Those music studies were cut short when her partner was offered a job as a computer engineer in Dublin. She initially agreed to join him in Ireland for six months and explore the country. However, he eventually convinced her to apply to jazz school in Dublin. “At first I didn’t want to go but my husband said you’ll go crazy if you stay at home, you need to go out and meet people. I’m so happy I did that. Without my studies I wouldn’t have met the circle of people I now have or the musicians I now know.”

While Shamshoum has travelled to Germany and Italy on holidays, she had never visited Ireland before the couple’s move in the summer of 2012. “I really like mythology and I was fascinated by fairies, I knew all the stories about the banshees. I had that image in my head of a land of green from books and films. But I never saw the grey clouds in the films, for some reason they left them out.”

The singer decided to focus on her studies after the move and put off gigging for two years. However, she quickly noticed that other musicians she met accepted her as an equal. “I feel like I became a much better musician after I moved to Ireland. I was being exposed to more types of music and was treated as a musician, not just as a singer. There’s a habit of saying to singers ‘you don’t have to read music, you don’t have to compose or arrange music’, but here they treat everyone the same and you feel important.”

Despite her hatred of Irish grey skies and cold weather, Shamshoum felt very at home in her new Dublin lifestyle. “I remember that from the beginning even though it was cold outside, it was very warm inside, both literally and figuratively. I was fascinated that older people here go out for drinks and socialise. I kept thinking my grandmother should live here. It was so nice to see that your life doesn’t need to end at a certain point.”

Then again, a big part of me liked the solitude. I liked having the space

Once she completed her studies, Shamshoum began feeling a bit lost and confused about how to continue working as a musician. “I got a bit depressed because when you’re in something so intense for a long time and then you stop, you feel you need someone to tell you what to do. Then again, a big part of me liked the solitude. I liked having the space.”

Shamshoum now gigs around Dublin and has performed abroad with musician friends she met in Ireland. She says Ireland has allowed her husband and herself to build their own “bubble” and develop their careers. “Back home it’s very social with a lot of family gatherings but that can be demanding too. Sometimes it takes away from couple time and being together. He’s finding himself and changing his job into being more of an entrepreneur. We’ve had the time to think and explore what we wanted here.”

When the couple first moved to Ireland they told their families they would return after five years. Five years on, Shamshoum’s husband is about to receive Irish citizenship and she has also applied to become a citizen of the State. “My mum had a problem with me leaving but when she came to visit us here she said ‘stay here, I think this is better. There’s more calm here.’”

Michael Harding: I sat alone in my room, even though I wasn’t in isolation
8