When your final parent dies, you need to recalibrate

Hilary Fannin: What happens the idea of home when, even though you’ve lived half your lifetime in another city, in another country? 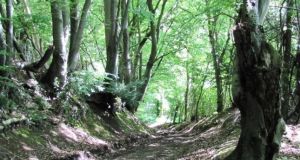 We drove to the Cotswolds, to a place called Slad, where, just as we parked the car, the sky darkened and it began to drizzle. We put our hoods up, followed an ascending path through the back of the village where the poet Laurie Lee lived and where he’d written Cider with Rosie and As I Walked Out One Midsummer Morning, books detailing his life in post-first World War Gloucestershire. I can still remember their paperback covers; I remember sneaking them from the bookshelf when I was an adolescent, hoping to read about sex and ending up reading about love: “At best, love is simply the slipping of a hand in another’s, of knowing you are where you belong at last, and of exchanging through the eyes that all-consuming regard which ignores everybody else on earth.”

We walked on through the limp rain that whimpered and spat for a while until it bored even itself and dried up. We walked past chocolate-box sandstone houses with big glistening cars parked outside, next to blood-red holly blossoms and evergreen japonicas. Each house was more prim and picture-perfect than the last, disorientating in their prettiness. After a while, their undulating rooftops and the buttery light spilling out of casement windows, illuminating the owners’ displays of tasteful pottery, began to make me feel slovenly and failed and shirty. I was grateful when the landscape changed to woodland and muddy tracks.

People with fading tans and purely decorative elbow patches nearly always have something to do with money.

At the mouth of the woods we met a central-casting Cotswold couple heading in the other direction. Glossy and self-possessed, they were dressed in head-to-toe Burberry; even their dog was wearing mossy-green wellingtons. Their waterproof footwear, like their composed demeanour, showed no sign of wear and tear. I wondered what they did for a living. Something to do with money, probably. People with fading tans and purely decorative elbow patches nearly always have something to do with money.

We walked deeper into a birch wood, where light babbled through the treetops like a broken river and where noisy pheasants rose, coughing and squawking, from the hedgerows. The beat of their wings as they took off sounded, my brother remarked, like the whirr of helicopter blades.

“There should have been a stile, and a stream, and then we should have passed a sign for an organic farm,” he read from his walking guide, with increasing scepticism. An hour later, deep in a city of lofty trees that leaned into one another, whispering their rustling secrets, we sat, he and I and his partner, to eat the sandwiches she had prepared that morning.

“Are we lost?” I asked them as they turned the map upside down and sideways and my brother took his iPad out of his backpack to compare the contours of the route map with the shape we had walked on his screen.

“See this section here, like a man’s face?” he said, pointing out lines to me on a map. “We seem to be on the end of his nose, but ideally we should be on his chin.”

“You’re really inspiring my confidence,” I told him. “I should have gone walking with the Burberrys – they’re probably at home now, toasting crumpets and buying small parcels of Kosovo before Brexit kicks in.”

We talked as we walked about dislocation, about loss, about being lost, about how, after the death of your final parent, families need to recalibrate or risk even further loss.

We walked on, found ourselves in a rolling meadow. At its western end the sun glowed fireball red; we reckoned we’d about an hour of light left. Ahead of us, forest rose up in a steep bank. We’d need to find our way through and out the other side before we lost the light. As we set out, a black rabbit appeared and disappeared, its absence making way for a herd of white-tailed deer who skipped past, frothy and skittish, until, like a mirage, they too were gone.

We climbed through the far woods, mile after feral mile. We talked as we walked about dislocation, about loss, about being lost, about how, after the death of your final parent, families need to recalibrate or risk even further loss. When the imperative to come home to visit an ailing parent disappears into the gathering dark like a white-tailed fawn, what is left, we asked. What happens the idea of home when, even though you’ve lived half your lifetime in another city, in another country, home had always meant returning to the place of your birth?

We reached the road just as the big pink sun slipped out of sight, retracing our steps back to the sleeping car, back past cottages that glowed with uneasy perfection as the light finally dissolved to dark.