Charismatic priest who gave his life to preaching, praying and spreading the rosary 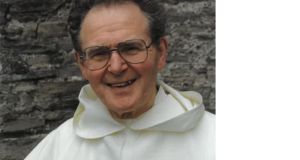 Fr Gabriel Harty was known as the “Rosary Priest”

Dominican priest Gabriel Harty died on May 9th in his 98th year. Gabriel was a charismatic figure who gave his life to preaching, praying and spreading the rosary.

He was known as the “Rosary Priest”.

Gabriel was a past pupil of the all-Irish Christian Brothers School, Coláiste Mhuire on Dublin’s Parnell Square.

There was a statue of Our Lady over the main door of the entrance to the school, and on one occasion, giving a retreat to students of the school, he said that every day he entered the school he felt he was walking into the arms of Mary.

After school he studied for priesthood at Clonliffe College and was ordained a priest for the Dublin archdiocese in 1945, where he worked for three years, serving as a curate in Cabra.

Gabriel was a kindly person with an extraordinary work ethic. He was a prolific writer and managed and edited the Rosary Letter for many years. It is fair to say that the publication was at its most vibrant under his editorship.

When the charismatic movement came to Ireland, Gabriel was one its most enthusiastic devotees.

His rosary apostolate started on the buses. CIÉ, as Dublin Bus was called “back in the day”, had a custom of running ghost buses. They were buses to bring drivers and conductors home after driving the last buses of the day. Gabriel travelled on these buses preaching and saying the rosary.

In an Ireland of another era he introduced the rosary to offices and factory floors, where after work, staff would kneel down and pray the rosary.

On one occasion he flew by sea plane from Foynes to Lisbon, where he preached on the rosary.

In 1968 he was elected prior of the Dominican community in Pope’s Quay, Cork, but quickly realised that it was not his forte, and he had the wisdom and courage to resign his priorship so as to give all of his energy to the preaching and spreading of the rosary, which dominated his life’s work.

Gabriel was a man who thought “outside the box” long before it became fashionable. In the 1960s he drove around Ireland in his rosary van with all the necessary details emblazoned on the side of the vehicle.

In his mid-nineties it was his practice to travel by rail from Newry to Dublin and then take the Luas to the Dominican priory in Tallaght, pushing and pulling his case.

As a nonagenarian he was chaplain at St Malachy’s Girls National School in Dundalk, locally known as the Friary Girls’ School, where he was greatly respected and cherished by pupils and teachers.

Gabriel was a member of the Dominican priory in Dundalk and died in Our Lady of Lourdes Hospital in Drogheda.

He would be delighted to know that his funeral Mass took place on the feast of Our Lady of Fatima.

That roguish smile of his would radiate a room.

Dining out: 12 of Dublin’s best restaurants with outdoor spaces
7