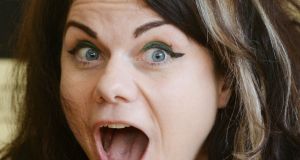 Caitlin Moran: ‘I honestly thought middle age would be a beautiful era of serenity.’ Photograph: Rune Hellestad/Corbis via Getty Images

Caitlin Moran is, like most people, looking forward to the US presidential election on Tuesday.

“I’m hoping for a good result – but I’ll be so relieved I’ll be crying,” she notes.

“Imagine what it would be like just to have [Donald Trump] erased from out minds. I’ll be 30 per cent more productive not having to care what this asshat does anymore. It would be amazing. We will party so hard.”

Despite much evidence to the contrary, the journalist/author/screenwriter asserts that this is actually a great time, politically speaking, to be a woman.

With her vape and shot glass at the ready, and dressed (well, a bit) like Peter Venkman for the night that’s in it, Caitlin Moran promises “verbal fireworks” and doesn’t disappoint.

Noting that the pandemic is very much a feminist issue, Moran says: “Women have had to leave the workforce, and people are in the very difficult situations at home in terms of domestic abuse or violence in the home. It all just seems to be affecting women in a worse way.

“In the UK, the biggest wave of [people experiencing Covid-19] are women between the age of 20 and 40, and I think it must be because so many women are in the service industries, or caring, people-facing industries.”

Later, Irish Times journalist and host of the Women’s Podcast Róisín Ingle asks why Moran decided to write about middle age in her recent book, More Than A Woman.

“I honestly thought that middle age would be a beautiful era of serenity, where I would have long lunches with gal pals, enjoy my capsule wardrobe and have a leisurely and elegant life, And if course that’s not what middle age turns out to be at all. You basically turn into the fifth emergency service for your social circle.

“I’d meet middle-aged women [at events] and they’d be all ‘no, don’t take a picture, I’m too ugly, I have a giant stomach, I’m too boring’. And I thought, ‘what it is about these women that makes them so ‘don’t at me?’ I wanted to shine a light on them and tell them, go do your f**king thing, because you’re superheroes.”

On being peri-menopausal herself, Moran says: “We are taught from an early age that your younger years as a woman are your best. You’re present and young and sexy and have sexual capital and everything still points upwards, and then it drops after 35.

“But for me, I found it [happened] the other way around. I was a very big girl in NHS glasses – if Lizzo had been in my life when I was a teenager my life would have been very different – and now I am swimming in lakes and doing yoga, and feel better about myself than when I was younger. You lose skin elasticity, but you also lose the amount of f**ks that you give.”

Moran also talked about men reaching middle age. “The playing field starts to level because men don’t know how to transition into a third act in their lives when they get older. They either go back to the first act and have a tattoo and a midlife crisis, or they go back to the second life and get married for the second time. Women, when they retire, suddenly climb mountains and work with fancy charities and learn how to dance with their mates.”

Among Moran’s biggest rules for a harmonious marriage/relationship in middle age is the “maintenance shag”; one that is in the diary every week

“We schedule ours for 8am on Fridays after the kids go to school. I write it as ‘waka waka waka’, which is what Fozzie Bear says, into the diary. The initial rip-your-pants-off thrill of sex disappears under an avalanche of things on the to-do list and suddenly you get to a point where it’s been three months since you’ve had sex.”

Moran then explains how a sound recording of her and her husband Peter having sex ended up in the family WhatsApp group.

Moran speaks about her admiration for the Repeal The Eighth grassroots movement in Ireland: “It was the only progressive movement that has worked in the western world,” she notes. “If it was run by men, they’d be on the cover of Time magazine, they’d be very highly paid consultants on other progressive movements, and be in TED Talks and be up for Nobel Prizes, but because it was women it was just ‘well, women always work things out’. It was genius.”

The Big Night In, sponsored by Green & Blacks, is a series of six live events hosted by Róisín Ingle in conversation with “inspiring , entertaining women”. They take place on Saturday nights from 7 to 8pm every fortnight until December 12th. Still to come are broadcaster Claire Byrne and former state pathologist Marie Cassidy.

A single ticket for all events costs €50, or special price of €25 for Irish Times digital subscribers. To purchase tickets and find out more, go to irishtimes.com/big-night-in.

We’ve discovered our bathroom has no foundations. What should we do?
8