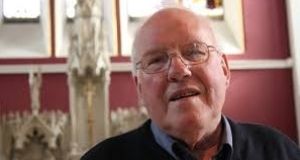 Canon Colm Kilcoyne came to national prominence in the aftermath of Vatican II as the Catholic Church endeavoured to make its teaching more accessible to the faithful.

His service on a pastoral level in the west of Ireland was interrupted by two separate stints as director of the Catholic Communications Institute in Dublin (1975-1979/1985-1989), an acknowledgement by the church hierarchy of his skills as a lecturer and communicator. He also wrote columns in national and local newspapers, including the Sunday Press and Sunday Tribune, and was a contributor to numerous television and radio programmes.

In the words of the Archbishop of Tuam, Dr Michael Neary, Kilcoyne’s “great gift lay in communications and he applied himself wholeheartedly to that important ministry”.

Post Vatican Council, the hierarchy set up the communications institute in order to respond, in Dr Neary’s words, “to the challenge of presenting God’s word in a meaningful manner; in a way that people could identify with it”.

Also on the staff was PR executive Terry Prone. In the wake of Kilcoyne’s death, in his hometown of Castlebar following a long illness, she described him as a man “with a sunny disposition who had warmth in spades”.

In a tribute on Midwest Radio, she recalled that even in the worst of times for the church such as the clerical abuse scandal, when other religious went silent, Kilcoyne had the courage to speak out.

When local radio went on the airwaves on 1989, Kilcoyne was the lead presenter and producer of the popular Faith Alive programme on Midwest Radio.

One of his co-presenters at that time, Fr Brendan Hoban, recalls him as “very much the driving force behind the church’s involvement in local radio in the west; he was convinced of the opportunity that the advent of local radio presented”.

It was through his initiative, in conjunction with his classmate, Archbishop Joseph Cassidy, and the western bishops, that a decision was made to help resource local radio.

Colm Kilcoyne was born in Castlebar in June 1934, the third child of John, a psychiatric nurse at St Mary’s Hospital, and Bridie Kilcoyne. He had three siblings, Sean, Olive and Marcella. The family lived in Thomas Street at one stage and later at other locations including St Bridget’s Crescent on the outskirts of the town. His childhood was clouded by the sudden death of his father, to whom he was deeply devoted, at the age of 54.

After his early education at St Patrick’s Boys NS, he enrolled at St Gerald’s College. Attracted to the religious life, he entered Maynooth College at 17, a relatively young age. In later years he was to recall his experience of the seminary in the austere 1950s as somewhat grim. The college, with 500 students, had a grey, institutional atmosphere. He missed the comforts of home.

After his ordination in June 1959 he spent a year attached to Corrandulla Monastery in Co Galway before taking up a teaching post at Coláiste Sheosaimh, Glenamaddy. Former pupils describe him as “a wonderful teacher” with “a great sense of humour” as well as being kind, gentle and unpretentious.

In a eulogy at the funeral Mass, his nephew Colm Hynes recalled his uncle as part of the fabric of his childhood home, regularly visiting and bringing his siblings on outings.

“Even in this sadness we know we were blessed by his presence in our homes and in our lives for so many years.” He continued: “Colm helped people who felt rejected by society and by others. He was person who wanted truth and integrity to be the cornerstone of everything he did.”

Along the route of the funeral procession from the Church of the Holy Rosary the hearse was stopped for fleeting moments at locations close to the Kilcoyne family home over the years. The brief pauses were a nod to his firmly established roots in Castlebar and his love for his native place.

As his former radio colleague, Fr Brendan Hoban noted: “Castlebar was centre of Colm’s world and he loved nothing better than to ramble around the town meeting people he knew, remembering times past.

“He was buried in Castlebar Old Cemetery in his father and mother’s grave. There was nowhere else, even in death, that he would have wanted to be.”

Archbishop Michael Neary, a townsman of Kilcoyne’s and a lifelong friend, was the main celebrant of funeral Mass.