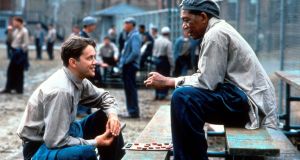 The Shawshank Redemption: For me there isn’t even the compensation of long, thoughtful conversations with Morgan Freeman or the hope we might escape this by crawling through a pipe full of sewage.

What we are going through at the moment is a bit like doing a prison stretch. We have routines but we are trapped within them and, if we are taking the right precautions, seeing only the same few faces every day.

Any news there is resembles the news we heard yesterday and tends to be bad. Some days we can deal with it; other days we want to take to the bed. It’s boring, and slowly but irresistibly soul-crushing. There isn’t even the compensation of long, thoughtful conversations with Morgan Freeman or the hope we might escape this by crawling through a pipe full of sewage.

If you could, you would.

Because you don’t know how long you’re going to be banged up for – it’s an indeterminate stretch so you can’t scratch off the days on the wall of your prison cell – so you feel you can’t hope. Hope is a dangerous thing.

(Yes, this is a movie prison I’m imagining here. I couldn’t get to an actual prison to do any research. You know, Covid.)

Even if you are doing reasonably well, you see others around you losing it. In the prison yard (social media) the other prisoners are starting to blame each other. It’s the fault of house parties or schools or pubs or young people or joggers. It’s the fault of this Government or the gardaí for not taking action against one or all of these groups; or for crashing the economy by not opening things back up again. Or Nphet for being hysterical.

The prisoners suspect each other’s motives. Everyone is carrying a shank.

Then again, you could argue that this breakdown in mutual trust has been happening anyway. It’s just been magnified by the pandemic, which, if you chat to the people at the edge of the prison yard, isn’t a pandemic at all but the world’s greatest super conspiracy.

Increasingly, I find the anger and suspicion caused by the pandemic more depressing than the pandemic itself. And I find myself taking relief in surprising places. One is buying records. Not the music – though I do love the music – but the purchasing process.

Nowadays it’s all online, where I’ve discovered an enclosed and comforting eco-system. There are various websites which connect you to mostly physical record shops around the world, selling mostly second-hand vinyl.

There is a grading system for the condition of the product: it can be Fair, Good, Good+, Very Good, Very Good + or Near Mint. I’ve bought records from all around Europe and the US, and not once has the vinyl not been in the condition as described. Often, there might be a note from vendor, thanking me for the purchase or enthusing about the record I just bought.

Most of the websites employ a system where I can rate the seller and they can rate me, giving us both an overall score: and that score can affect who people buy and sell to. This seems to build in an enforced civility if anything goes wrong. People are reluctant to go nuclear.

And it works. But for another reason too. Taste in music is a highly subjective thing. It can be influenced by nature, nurture, memory, circumstances or a tin ear. People can argue passionately about it, but underneath that is a shared belief that music is a good thing.

People don’t argue that music is a mind control plot or that music shops are in the thrall of Big Vinyl. It’s a tiny example, I know, yet it’s still a relief to know that there are people in the world who want to be decent, who assume each other’s goodness before jumping to some darker conclusion.

So, here’s my plan. I’m going to buy a massive poster of Funkadelic and stick it to my wall, then get a box set of any old rubbish in Fair condition – let’s say Starship – and use it to slowly dig my way out of here.