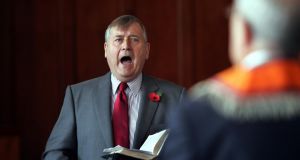 Brian Kennaway was an Orangeman and Presbyterian minister who took his obligations seriously, which entailed support for civil and religious liberty for all. He was one of a number of Orangemen who notably went to Harryville Catholic Church in Ballymena in the late 1990s to stand in solidarity with the congregation when loyalists blockaded the church.

He was loyal to the Orange tradition but highly critical of the Orange Order leadership. He saw the leadership’s refusal to negotiate with the Parades Commission and with Catholic residents as damaging the order and wider society. Kennaway was as scathing of the order as of republicans in his book The Orange Order: A Tradition Betrayed, published in 2006.

He served as convenor of the education committee from 1992 to 2000, when hardliners forced him out . He served as president of the Irish Association for Cultural, Economic and Social Relations, also sitting on its council. He was also the first Orangeman to officially attend Leinster House and the first to write an opinion piece in An Phoblacht, official paper of Sinn Féin, sharply challenging that party.

Kennaway was a man of strong Christian beliefs. Conservative in his theology, he held that Christians should be salt and light in their communities, acting as “agents of transforming engagement”.

These beliefs meant he would not personally take part in joint services involving Catholic religious. But they were what led him to take his stand at Harryville, and to strongly and frequently condemn those in the order who deliberately antagonised the Catholic community. He held there should be no paramilitary bands or trappings at parades and bad behaviour had to be punished. He denounced the presence of loyalist paramilitaries.

Despite the order’s opposition to the North’s Parades Commission, he served on it from 2011 to 213 and proved he could act independently, and was not in place to favour those perceived as friends.

He was born in the Shankill Road area of Belfast in January 1944, only child to George Kennaway, a boiler man, and his wife, Margaret (née Hyde). He was educated at Crumlin Road Junior School, Carr’s Glen Primary School, and the Boys Model Secondary School. At 15 he left school and began work as a milkman.

Early in his working life he became a committed Christian. Over the following years, he felt the call to serve God in the ministry. In his late teens he returned to education, attending Shaftesbury House Tutorial College; Magee College; Trinity College Dublin; and Union Theological College.

After further training, he was ordained in 1976. In early 1977 he was called to Crumlin, Co Antrim, as minister. He served there until retirement.

During his years in Crumlin he showed his ability to build good community relations in a changing Northern Ireland. The town’s population tripled, and changed from being 70 per cent Protestant to 80 per cent Catholic. As well as his informal work, he served on the Community Police Liaison Committee and the Community Forum.

He had a sense of both Britishness and Irishness. To him, Britishness was not a glove he could slip on and off, it was his hand. He felt, too, that he was of Ireland, a minister of the Presbyterian Church in Ireland and a member of the Loyal Orange Institution of Ireland. He sought to seek how Ireland’s various identities could find space with each other. He was on the Government’s Interdepartmental Committee for the development of the Boyne site.

He had a warm personality. Thus he could build personal bridges with some republicans. Gifted with a sharp mind, he spoke forthrightly with humour, conviction, and fluency, and showed grace to those with whom he disagreed.

He is survived by his wife Liz and sons Mark, David and Ian.