Margaret Day obituary: Hotelier who attracted tourists to Inishbofin ‘in their droves’

She ran Day’s Hotel on the island, enticing many artistic and creative types to visit 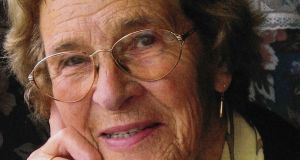 While in England, Margaret Day nursed a young Noel Browne, who had come to England for TB treatment. When he later returned as a doctor, she accepted his offer of a job in Middlesex

Inishbofin matriarch, hotelier and nurse Margaret Day, who has died aged 99, is credited with kick-starting tourism on the picturesque island off the coast of Galway in the 1950s.

Born Margaret O’Toole, on the neighbouring island of Inishturk, she was the eldest of five. Her early years were marked by tragedy, with the loss of her mother and youngest brother. Her sole surviving brother died when she was 20. But there were happier times when her father married again, and she gained 10 beloved step-siblings.

Secondary school was beyond her family’s means, so she began working as a servant in Louisburgh after she left primary school. A few years later she moved to Dublin to work for a family where the duties included caring for a sick child. This experience encouraged her to apply to be a nurse and she left Ireland for Cheshire in May 1939, aged 19. The second World War broke out less than four months later.

Despite the difficult wartime conditions, she loved the work, and went on to train as a midwife. While in Cheshire, Margaret nursed a young Noel Browne, who had come to England for TB treatment. When he later returned as a doctor, she accepted his offer of a job at Harefield hospital in Middlesex.

Margaret met Inishbofin native Miko Day on one of her trips home and she moved back to marry him in 1948. Miko ran Day’s Bar and had inherited a landlord’s house that had been uninhabited since 1918. The poet Richard Murphy inadvertently played a key role in turning it into a tourism business. He was sailing to Clare Island with friends in 1951 when the weather led them to take refuge on Inishbofin. They had nowhere to stay so Margaret opened the landlord’s house to accommodate them. It became Day’s Guesthouse and, later, Day’s Hotel.

Richard Murphy began running daytrips from Cleggan, bringing a succession of artistic and creative types to the island. The writers Sylvia Plath and Ted Hughes had tea at Day’s Hotel and Sylvia Plath was so entranced by Margaret’s lilies that she declared she would not leave without taking a bulb. The island also left an impression on American poet Theodore Roethke who spent a few months at her hotel. In his Roethke biography The Glass House, Allan Seager wrote about Day’s Hotel “where one of the most handsome couples in the world, Michael and Margaret Day, dispense their inimitable hospitality”.

The poet Cecil Day Lewis was another patron of Day’s Hotel as was the Shakespearean actor Tony White. The sculptor John Behan was a regular visitor and became a good friend.

Her retirement gave her time to indulge her love of travel and for many years in her 80s, she rented a house in Cape Town

Margaret could see the attraction of the island for people who wanted to escape city life, so she astutely targeted that market with advertisements in the Sunday Times and the Observer, offering “pure boredom, nothing to do, just peace and quiet”. The tourists “came in their droves”, she later recalled.

She often deputised for the island nurse so when the full-time position came up in the late 1950s, she applied for the job. However, her qualifications were not recognised, despite the fact that she had trained nurses in Britain. Undaunted, she undertook student nurse training in Galway, graduating with a gold medal, and got her public health nursing qualification.

She retired as a public health nurse in 1985 but continued to run the hotel into her mid-70s. Her husband Miko died in 1994. Her retirement gave her time to indulge her love of travel and for many years in her 80s, she rented a house in Cape Town, where friends and family would visit her.

Her latter years were spent enjoying the company of her five children, her 20 grandchildren and 19 great grandchildren. She loved opera music and ballet and relished the challenge of a good crossword puzzle. Tributes paid to her this week recalled her warm hospitality, her engaging wit, and her unofficial title as mother of the island.

Her talent for attracting visitors to Inishbofin continued after her death, with long queues of mourners forming on the Cleggan pier to catch the ferry to her funeral.