‘Doing my taxes I felt incompetent as a child and wept’

Michael Harding: I felt as incompetent as the child I once was, and still am, inside 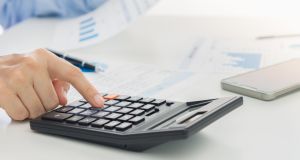 “I got irritated with the figures, and I couldn’t manage to add anything up”

Just when I think I’m about to get happy, something arrives out of the blue that makes me sad again, inside.

For example I was in Galway recently for a book launch and I stayed in the Park House Hotel. I went to bed early and the following morning I was up at 7am, and I met two policewomen from Chicago at the breakfast, who were madly in love with each other. Just being with them for a few minutes made me happy, and I decided to head out onto Eyre Square for a stroll.

I love Galway at any hour of the day, but early morning is my favourite time to walk down Shop Street and listen to the gulls crying near Spanish Arch.

In the old days I often arrived in Galway with nowhere to stay, and nothing but the clothes on my back and I’d hang out in pubs with bearded middle-aged and pot-bellied musicians, or at all-night parties in student flats hoping that someone would offer me a floor to sleep on.

Invariably I’d end up on the streets at dawn contemplating the price of a train back to Dublin or another day hitching in the rain.

Last week there were lots of young people on the early morning streets heading for lectures and libraries as I walked by.

I headed across Eyre Square and down past cafes where smokers were sipping their morning coffee in the open air, at little tables drenched in a soft mist. I saw streams of young women with backpacks ploughing ahead of me towards some imagined future, although there were others I noticed too, still waddling home in high heels.

I passed one woman with glitter in her hair, and a miniskirt not longer than a large T shirt  trying to get in a front door on a street near the court house; but she was so shook from the night before that her hand couldn’t hold the key steady enough to lodge it in the door.

Near the post office a couple struggled in the rain. They looked like they had been out all night. She was pushing an empty supermarket trolley, and he encouraged her from across the street.

She laughed, and they battled on in the morning rain holding each other. Their love made me happy

And I heard her whisper.

“Some day I’m gonna buy myself an umbrella.”

Her hair was matted and her blouse soaking wet, and she looked like she didn’t have the money for a coffee never mind an umbrella. She couldn’t walk without his support when she abandoned the trolley, but she laughed, and they battled on in the morning rain holding each other. And their love also made me happy.

I was drawn to the cathedral because the grandeur of its stone interior always quietens my heart every time I sit in it. I sat for a long time, just watching two old men with peaked caps inspecting the stations of the cross. It was only when they knelt in a pew that their hats came off, as they gazed towards the sanctuary with an elderly awe.

I decided to visit an old friend later, out in the suburbs, but I found him more fragile than I expected. His wife opened the door and he barely knew me even when I leaned over the bed to hear him whisper.

I remember him years ago, as strong as an oak tree in summer, majestic and full of leaf

I don’t know what I expected; maybe that he might have remained forever young.

I remember him years ago, as strong as an oak tree in summer, majestic and full of leaf.

But his bones had lost their muscle and his face had fallen into a stiff and gaunt repose. He’s still an oak tree to me, but it’s autumn now; the leaf has fallen and the branches are exposed as his serenity deepens.

I didn’t realise that his fragility would upset me. In fact I didn’t let on when I was with him. I braced myself beside the bed, and held his hand as we spoke about journeys made, and not made.

Then I bade him farewell, pretending that everything was normal.

But the following day I was doing my tax returns for the year and I got irritated with the figures, and I couldn’t manage to add anything up and I felt as incompetent as the child I once was, and still am, inside.

And then I thought about all the people I saw in Galway, and how soon it all passes. And I wept, for no particular reason at all.