Maura D Higgins? Be original with a topical Halloween costume 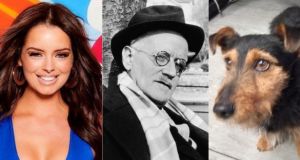 Your imagination is the only limit to coming up with the funniest or most investive Halloween costume. Photographs:Facebook, Carola Giedion-Welcker courtesy of the Zurich James Joyce Foundation, Irish Rail/Twitter

Every year, Halloween is dominated by a few topical and trendy costumes.This year, people have taken inspiration from movies, memes, and celebrity scandals.

Indeed, The Joker and Rebekah Vardy’s Instagram account have ranked among the most popular costumes this year.

Spooky season may be drawing to a close but there is still time to dress up. If you want to show that you’re in the know, here are some last-minute costumes to consider.

It has been a trying time for Anglo-Irish relations, made worse in no small part by audience members on Question Time who say things like, “Fiddlesticks! Would it not make more sense for Éire to be ruled from Westminster by one of the Queen’s corgis?”

For extra credibility, say things like, “I suspect you Southern Irish could be very handy at netball.”

Lost dog on a commuter train

Animal costumes are a solid option if you’re feeling lazy or unimaginative.

Just ask every woman who has donned a pair of studded cat ears from Claire’s Accessories and declared, “Mission accomplished!”

This Halloween, why not mix it up and dress up as a lost dog on a commuter train? You know the ones. The pesky pooches who escape the confines of Co Kildare and board the train to Dublin to experience some of that big city life.

That is, before they inevitably catch the notice of nosy humans and become the subject of a viral internet campaign.

Simply throw on a dog onesie, assume a dopey disposition, and skulk around the Dart. Before you know it, people will be asking if you’re lost and checking if you’re microchipped.

President Michael D Higgins and Maura Higgins are among Ireland’s most universally beloved public figures. Pay tribute to the two of them by dressing up as President Maura D Higgins.

To get the President Maura D Higgins look, first acquire a grey wig and pair of distinguished spectacles.

Then purchase a form-fitting satin blazer dress from the likes of Boohoo or PrettyLittleThing. Put it together et voilà. You are President Maura D Higgins.

Now all you have to do is swan around and say things like, “To quote John Millicent Synge . . . why are you askin’ her dat?”

Puzzle people by showing up to a Hallowe’en gathering, wearing an ill-fitting suit and carrying a briefcase. “What are you supposed to be?” they’ll ask. “A . . . CEO?” You will chuckle at their naivety.

“I’m not a CEO,” you’ll say. “I’m an executive vice president.” This response will knock them for six. “That seems like a made-up job” they’ll say.

“Actually, it’s a real job,” you’ll say, growing defensive. “It’s a very important role that comes with its own responsibilities.”

Dressing up as a skeleton for Halloween is passé. But you know what’s not passé?

Dressing up as James Joyce’s corpse. With the news that Dublin City Council is seeking to repatriate the author’s remains, it is the must-have costume for the spooky literary set.

All you need is a novelty skeleton costume, a bowler hat, tiny pair of glasses, and stick-on moustache. Portrait of the artist as a dead man, if you will.