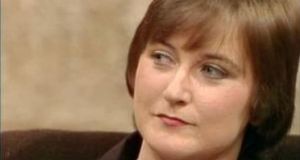 Joni Crone on The Late Late Show in 1980: during the 23-minute segment she never flinched, not even when asked whether her parents regarded her as “mentally deficient, or sinful or culpably ignorant”. 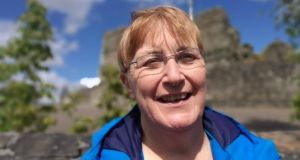 Joni Crone: her “semi- autobiographical” play Anna Livia Lesbia was informed by what she heard from those who rang gay helplines in the 1970s. 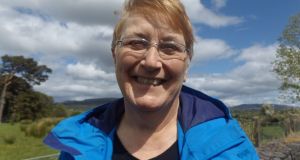 It’s nearly 40 years ago but Joni Crone still remembers the “whoosh” of the studio lights seeking her out and her stomach churning fear as she waited for Gay Byrne to tell her relatives, neighbours, work colleagues – and the nation – that she was a lesbian. A sympathetic member of the Late Late Show team had given her a double vodka when she wondered if she was about to be the first person to faint on live TV. “He held my hand and said ‘trust me’. He told me I’d be grand, to just look Gay in the eye and to forget about everything else”.

It was 1980, two years before Declan Flynn, a gay man, was beaten to death in Fairview Park in Dublin. Homosexuality would be regarded as a crime for another 13 years. Crone was there to talk about the need for law reform and to give an insight into the horror stories she regularly heard on the helpline Lesbian Line, where she had once listened in as a whispering caller was interrupted and beaten in her own home. That caller rang back from a hospital corridor days later. Crone wanted to give out the telephone number of the helpline on the show so people like her would have somewhere to turn.

She never did get to give out the number during what she describes as a “personal interrogation” where getting her to cry seemed to be the objective. But during the 23-minute segment she never flinched, not even when asked whether her parents regarded her as “ mentally deficient, or sinful or culpably ignorant”. Today the 63-year-old stresses that she believes “Gay was on my side” and was being professional, asking the questions many of those watching at home would ask.

She was 26 when she stepped up to explain what it was like as a teenager to believe you are the only lesbian in the world. It was a time when “queer bashing” was tolerated in many quarters, when gay people were afraid of losing their jobs, of having their windows smashed in or of being ostracised by families whose response to their son or daughter coming out was frequently to call in the priest or the psychiatrist.

Her resolve to speak out was , like her decision to pen the “semi- autobiographical” play Anna Livia Lesbia, informed by what she heard from those who rang gay helplines in the 1970s. “Some of them were silent calls. Some were suicidal,”she recalls. So vulnerable were the callers that David Norris, champion of the gay rights movement, sought training from the Samaritans for the volunteers. Crone got calls from convents, and from isolated rural areas; calls from married women saying they felt trapped, and calls from teenagers looking for information and a safe place to hang out. A caller told of being sent to a priest who molested her. Another was sent to a priest for an exorcism. “There was an attitude that it was a mental illness and that you were diseased and needed to be cured” explains the Co Leitrim-based writer and activist whose day job is as a “trauma therapist”.

“This was a time when two doctors could sign to have you committed,” explains the former Fair City scriptwriter who was born on Dublin’s Macken Street. She said gay people were undergoing ECT (electroconvulsive therapy) and even lobotomies.

“That was the treatment at the time. Yes, I know people this happened to. So people were ringing up in an awful state, saying ‘can you help me?’”

She is careful to stress that the gay community also came to know a network of sympathetic and caring priests and nuns who could be called upon when a family decided that religious intervention was needed. “They were a minority but they were significant. These priests and nuns definitely saved lives” she stresses.

Crone lived in Dublin when Declan Flynn was killed in Fairview Park by a gang of teenage “queer bashers”, one aged just 14. The judge who allowed them walk free from court, said they were “cleaning up the area”.

“I suppose the one good thing about that was the wave of outrage and support that it sparked,” says Crone who became involved in gay rights and women’s rights after returning from London in the early 1970s.

RTÉ set designer Charles Self was murdered in his own home, earlier the same year with probably more negative consequences for the gay community, she believes. “The police were harassing people and finger-printing people. I suppose there was an attitude that there was a murderer on the loose.”

Two years on from the marriage equality referendum, Crone, who married her partner Mary in Sligo last year, is happy to acknowledge that there has been a transformation – although she is far from complacent.

“It was a great platform and opportunity for everyone who was pro gay rights as human rights, and for everyone who has a gay daughter or son, or cousin or parent to voice their solidarity,” she says. “There is no doubt that it confers a status you would not have otherwise. I personally would have preferred that civil partnership had gone on for straight and gay people,” she adds. Young gay people will now be increasingly under pressure to do the respectable thing and get married, she jokes.

And while gay people were invisible when she was young, she worries about today’s children and teenagers, given that sexual orientation can be an issue even in primary school . “That is the price of visibility. You have it at a very young age, the bullying about being gay and of course cyber bullying is a huge issue. I would not like to have to go though it all again.”

There is no sense she believes the struggle is over. “In a way you never stop coming out. Every new work environment I go into I have to come out again because people assume you are straight unless you tell them otherwise.”

Anna Livia Lesbia is her 10th play and was written while she was writer in residence at The Glens arts centre in Manorhamilton, Co Leitrim, in the wake of the equality referendum.

“After the referendum people on radio were saying sure this is marvellous , the greatest thing that happened since the start of the gay rights movement in 1993! I thought there is 20 years here that has been written out or that the young generation does not know about.”

She regards the play as a collaboration with Splodar, the in-house drama company at The Glens, and says the play came alive when entrusted to cast members such as Chakra O’Connor, Sheila O’Keeffe, Gerry Farrell and narrator Deirdre O’Meara. Director Prin Duignan laughingly admits it was an education for him and for some of the cast, especially the references to the gay scene in London in the 1970s. “I remember one of the actors saying to me ‘what the hell is a diesel dyke’ and I said ‘ask Joni’,”he recalls.

Crone has no regrets about her activism or her Late Late Show grilling. “I was amazed but for a good 20 years after it people were coming up to me saying ‘thank you – you helped my daughter/aunt/friend’.”

She was afraid to walk down the street in the days following her television appearance – and when she did a trader on Camden Street spat at her feet saying “I would not serve the like of that.” But another trader beckoned her over, saying “Don’t mind her love” and that kindness meant she was able to walk on.

RTÉ had the expected I-will-never-pay-my-licence fee-again brigade squealing in outrage but analysis by the Hirshfield centre showed callers were supportive by a ratio of 60:40.

Crone says she was ready to leave the country but she didn’t. And she’s glad.